Squall Line in the nebraska panhandle

After not having chased in the Plains during 2020 due to a series of unfortunate circumstances detailed HERE, Michelle and I were finally able to make a days-long chase trip. After slowly making our way westward the previous two days, we were near our target for the day - northeastern Colorado.

Here, discrete supercells were anticipated with all severe threats possible, though the expected high storm bases would limit tornado potential. After stopping in Ft. Morgan, CO for lunch and visiting a park, convection began to bubble south of town. We repositioned south of a more robust cell that had developed and was moving northward. It attempted to strengthen and develop structure (below) as we watched, but additional cells going up in its proximity led to its weakening and ultimate demise.
We moved back north toward the Ft. Morgan area, where some stronger storms had formed, but these too failed to sustain themselves and produce anything other than some dark skies and occasional intense cloud-to-ground lightning strikes that seemed to evade my camera. Taking in the broader surroundings and seeing that nearby convection was messy and weak, we slowly made our way back northward to Sidney, NE where we would stay for the night, allowing for us to keep up with this disorganized convection, just in case.

As we reached I-80 and drove eastward, the disorganized convection rapidly organized and strengthened, with most of the storms growing upscale into a squall line. We exited I-80 near Brownson, NE to watch as this line and its associated shelf cloud approached our location:​ 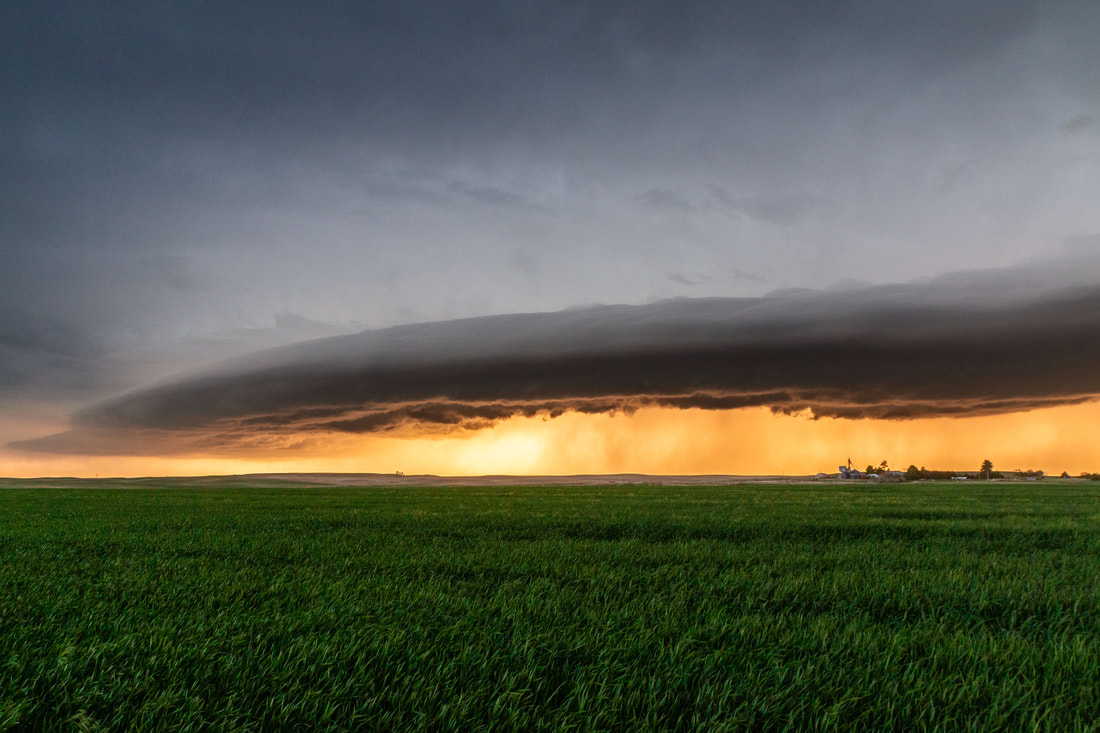 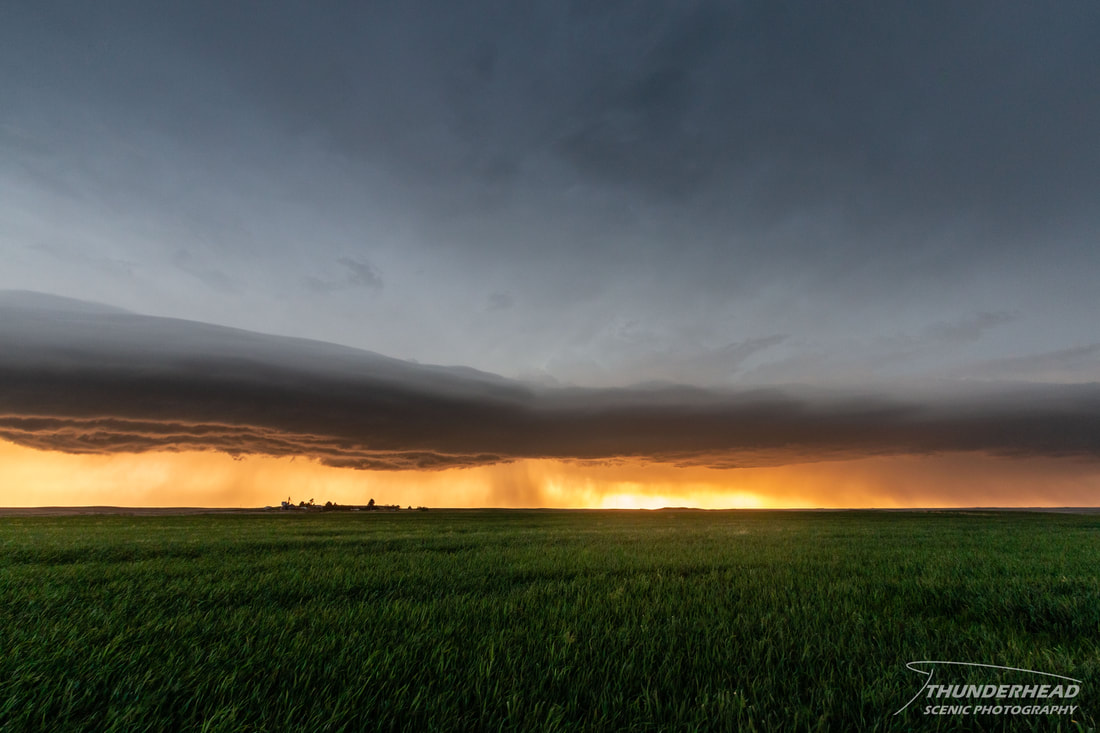 A few updrafts within the squall line developed brief rotation, evident on radar and visually. Below is radar imagery from around the time the below image was taken, which is zoomed in on the northernmost area of rotation. The broad lowering in the center of the image was rotating, and what appears to be a bit of a downdraft cut can be seen impeding on the left side of the lowering just behind the shelf.
​The squall line drew closer, prompting us to move eastward toward Sidney. Unfortunately, the quickest way to the other side of Sidney seemed to be through the town. While we were still able to keep an eye on the storm, this route did not allow for clean pull-offs to photograph the line as the setting sun peeked through underneath it. This is reminiscent of a scene we witnessed in 2018 in nearly the same area, but the 2018 storm was more dramatic. Once we reached the other side of town and found a place to pull off, the setting sun brightly illuminated the underside of the storm, making for some very dynamic scenes:​ 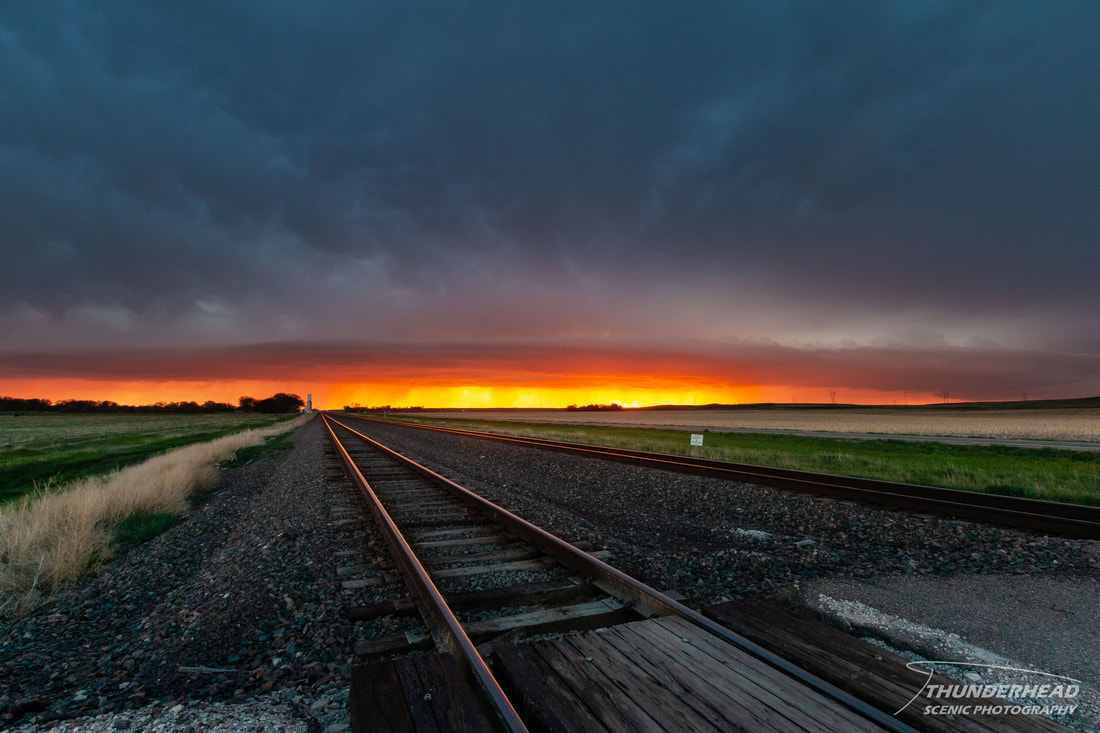 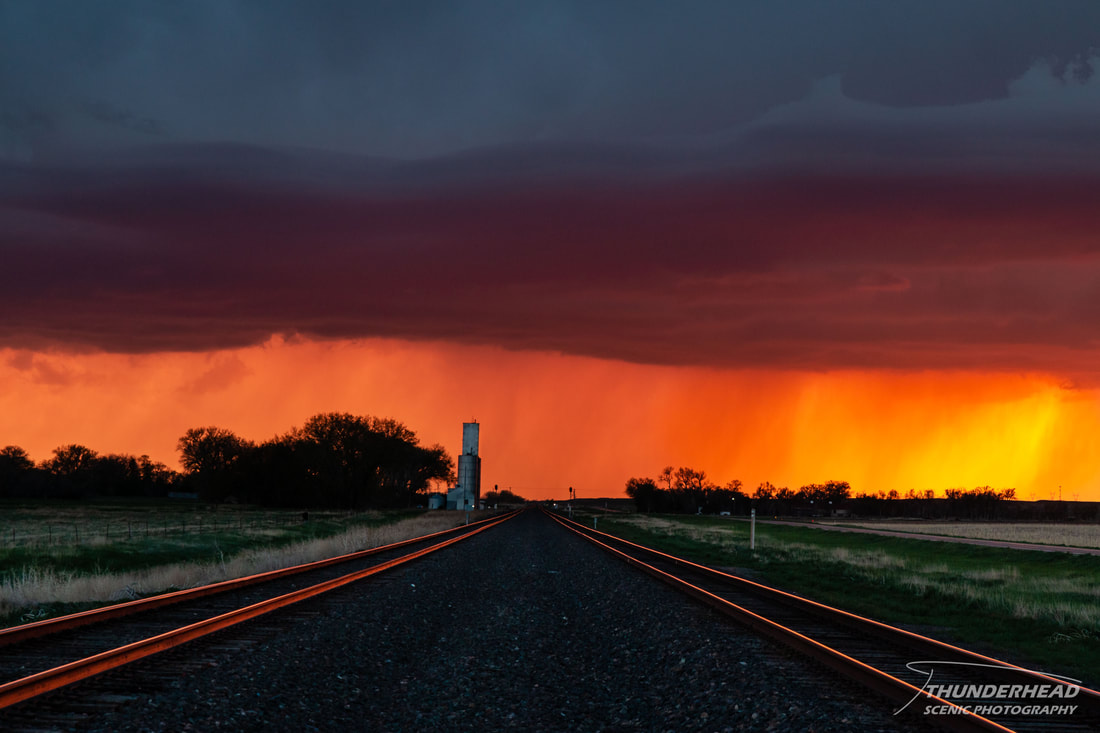 Around the time the rotation was noted in the squall line, a supercell on the tail end of the line developed and produced some decent structure per other chasers’ accounts. Given the transient nature of the convection in the area and our positioning, we had confidence that we would reach the storm either before the sun set or before it dissipated. Another supercell developed after sunset north of the first, and we could see its seemingly well-structured base from our position. However, as we made our way westward toward our hotel and potentially that storm, it weakened, making the decision to call it a day an easy one.​