Supercell and possible tornado near lamar, CO, and Comments on chaser convergence​

Today was to be a big day, as confidence in the severe threat over the Panhandles, southwestern Kansas, and southeastern Colorado had been increasing the last several days. Storms were to fire along the dryline from near the triple point in eastern Colorado down through the Texas Panhandle and move east-northeastward. The weak capping trend was to continue this day, allowing for convection to potentially fire early and grow upscale into a line. However, the cap was a little stronger in the Texas Panhandle than further north, so our original target was to stay around Amarillo and wait for convection. As midday approached, it became apparent that the cloud cover that had been present over the Panhandle all morning was not going away anytime soon and would limit surface heating. We repositioned northward into southwest Kansas as a storm formed over southeast Colorado and moved northeastward toward us. It looked strong and was severe-warned for a while, but it fell apart as it approached us near Syracuse, KS. At this point, several areas of convection were present along the dryline, but nothing looked promising, so we stayed put and tried to figure out what to do. A tail-end storm in a cluster of storms approaching Lamar, CO began to develop supercellular characteristics on radar, so we began heading westward toward it. We came into view of it north of Wiley, CO, and it had since become tornado-warned. As with a lot of the storms we had encountered over the last several days, the storm did not have much structure, but it did have a nice wall cloud: 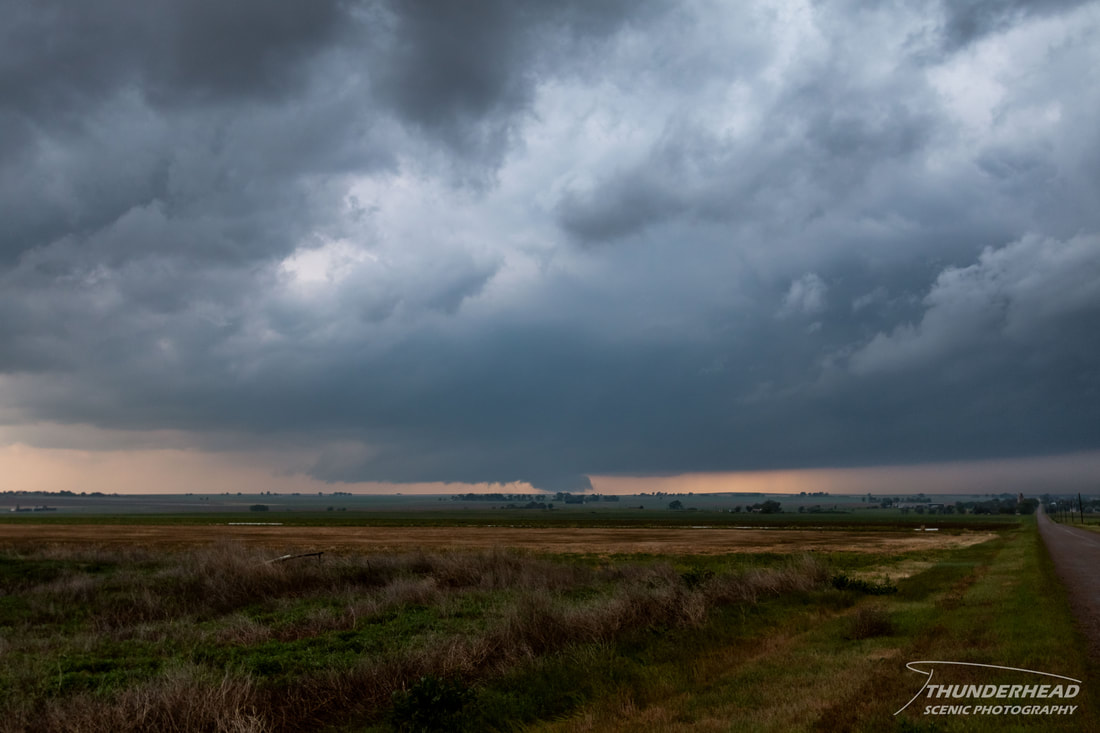 ​Seeing as this was one of the only dominant storms in the area on such a high-potential day, numerous chasers began to converge on this single storm. The storm was moving toward the intersection of Highway 287 and 96, so it made sense to take 287 north; however, when we went to pull back onto 287, we could see a long line of cars moving northward. Seeing as it would be difficult to move into the line and that we would be punching through this potentially tornadic storm with hundreds of other chasers, we took the long way and went south on 287 to get on Highway 50 east and then Highway 196 east to 385 north toward Sheridan Lake, CO. During our entire trip to this location, we did not encounter a single chaser, and while we were far away from the storm, we regained view of it quickly.

We stopped just north of Sheridan Lake as we noticed a cone-shaped funnel emerging from the cloud base to our west. It continued down to nearly touching the surface:
Our view of the cone was obscured shortly thereafter as a developing storm dumped rain on us and the cone became rain wrapped. Seeing as we were approximately 15 miles away from this feature, it’s hard to say whether there was a ground circulation beneath it or not. A bulk of the train of chasers was probably on 96 at this point, and their view of this feature would have most likely been obscured by the rain-filled RFD. There were a few other chasers in the area; though, and they too thought it may be a tornado. Velocity data shows that there was strong rotation within the storm that matches positions with this feature at this time (below). This feature was reported, but given that it occurred over barren farmland in the middle of a wet, dirt road network and that any footage of it couldn’t confirm it wasn’t on the ground, it has not and most likely will not be officially surveyed and confirmed as a tornado. 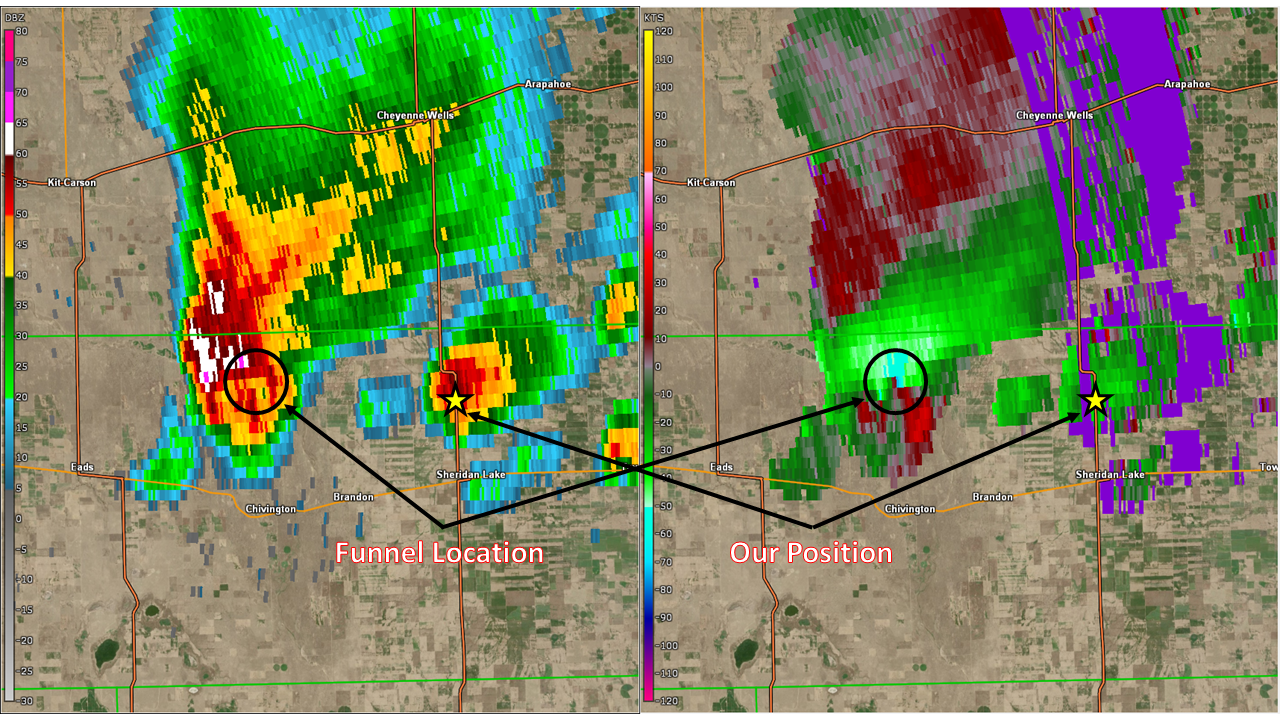 ​The rain cleared rather quickly, but when it did, the funnel was gone: 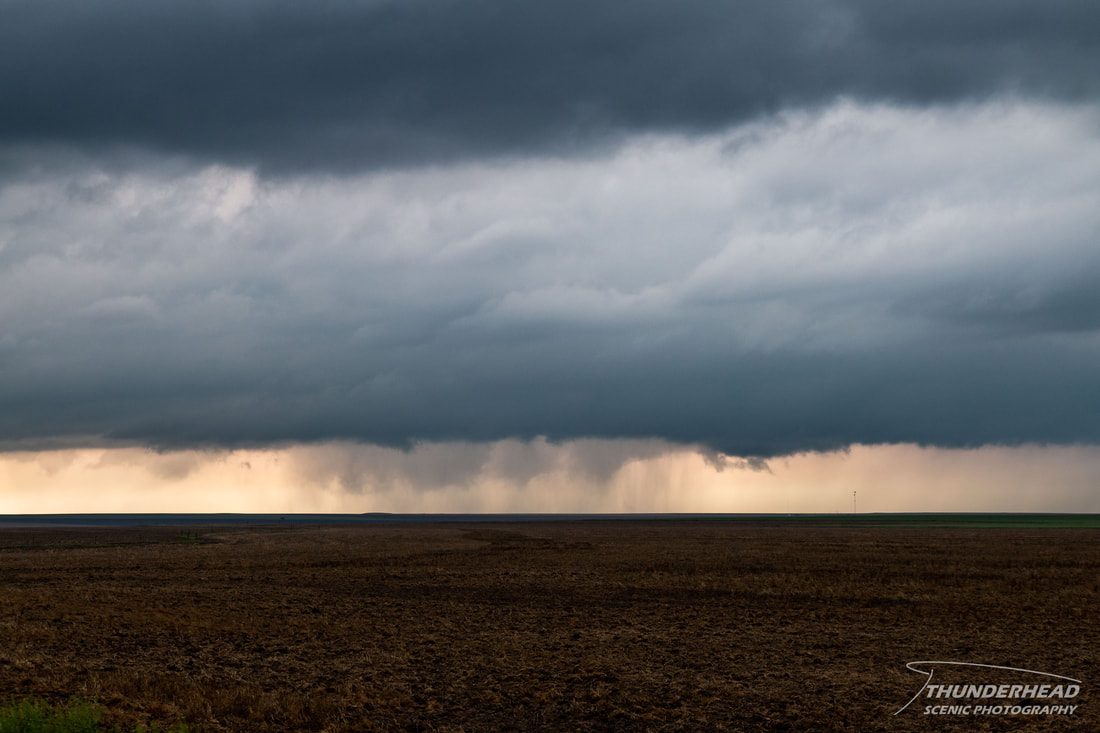 Around this time, the train of chasers caught us, and a continuous line of chasers passed us going northward on 385. Seeing as this was the only route to the storm and that the storm was not looking as organized any more, we stayed put and watched it drift away, ending our chase.

Over the last two decades, the number of chasers on the road during days with severe weather potential has increased. While there’s no good way to objectively measure the amount of chasers out chasing on any given day, one way it is noticed is by “chaser convergence”. This happens on well-broadcasted, higher-risk days when there is one or two storms near population centers. The road network can also contribute to this as well. A few of these factors lead to the crowds we witnessed in the above event. Seemingly apocalyptic convergence events are fairly rare, but they are embedded in chasers’ heads for eternity and get brought up on a regular basis as evidence as to why chasing is ruined or getting more dangerous, why there needs to be regulations or licenses, etc. Dealing with the masses while out chasing can be quite frustrating, but I’ve found ways to deal with it.

-Chase less popular or long-shot targets. While these setups will not be slam dunks, they can be successful, and when they are, you’ll have captured storms and/or tornadoes that few others will have seen.

-Don’t chase events that are a combination of higher-end storm/severe potential, near population centers, or on weekends. A good example of this: a Storm Prediction Center Moderate or High Risk centered on Oklahoma on a Sunday.

-When on a storm that has garnered a lot of attention and crowds, take the more out-of-the-way, less obvious roads. While these may put you in a less-than-ideal position (i.e. further way) relative to a storm in the short term, you can reposition in front of the storm and beat the crowds in the long term.

-If all of that fails for whatever reason and you find yourself in a chaser congo line, remember, if you are in the line, you are part of the problem.