The target for this day was the triple point in southwestern Kansas, where a surface low was forecast to move out of southeastern Colorado with an outflow boundary serving as a warm front draped west-east and a dry line north-south. Convection was to fire in the mid-afternoon along the dry line south of the warm front and continue through the evening.

We waited in Leoti, KS for convection to develop, and it didn’t take long. A couple of slow-moving storms formed, with the northernmost one seeming to be the most dominant. We moved north of Leoti to get closer and watched as it exhibited some interesting lowerings here and there as it cycled. 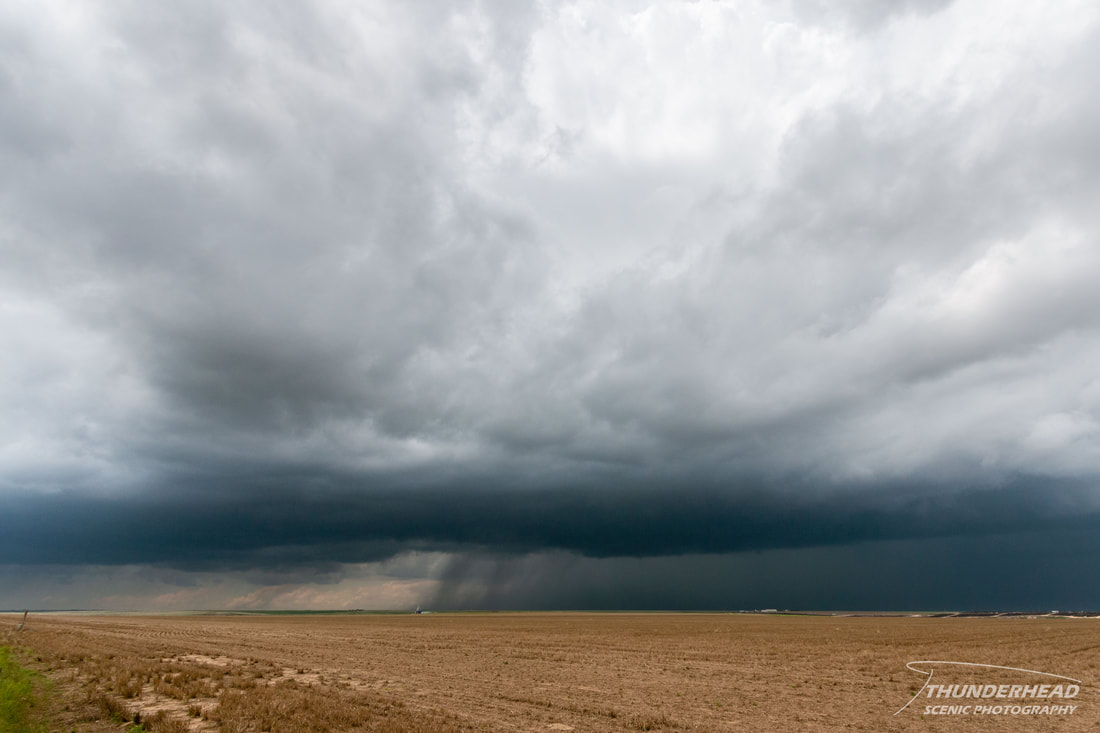 As it approached our position on Highway 25, we tried unsuccessfully keeping up with it on dirt roads. Even if they looked drivable, we would get roughly a half mile down one of these unpaved roads, and it would turn to mush and threaten to stall us. Keeping on the paved grid would distance us a little more from the storm than we would like, but after a couple of attempts on dirt roads and seeing that they were too soft, we stuck to pavement. Finally catching the storm again north of Scott City, it had some interesting features and tried to take on supercellular characteristics, as well as produce some lowerings: 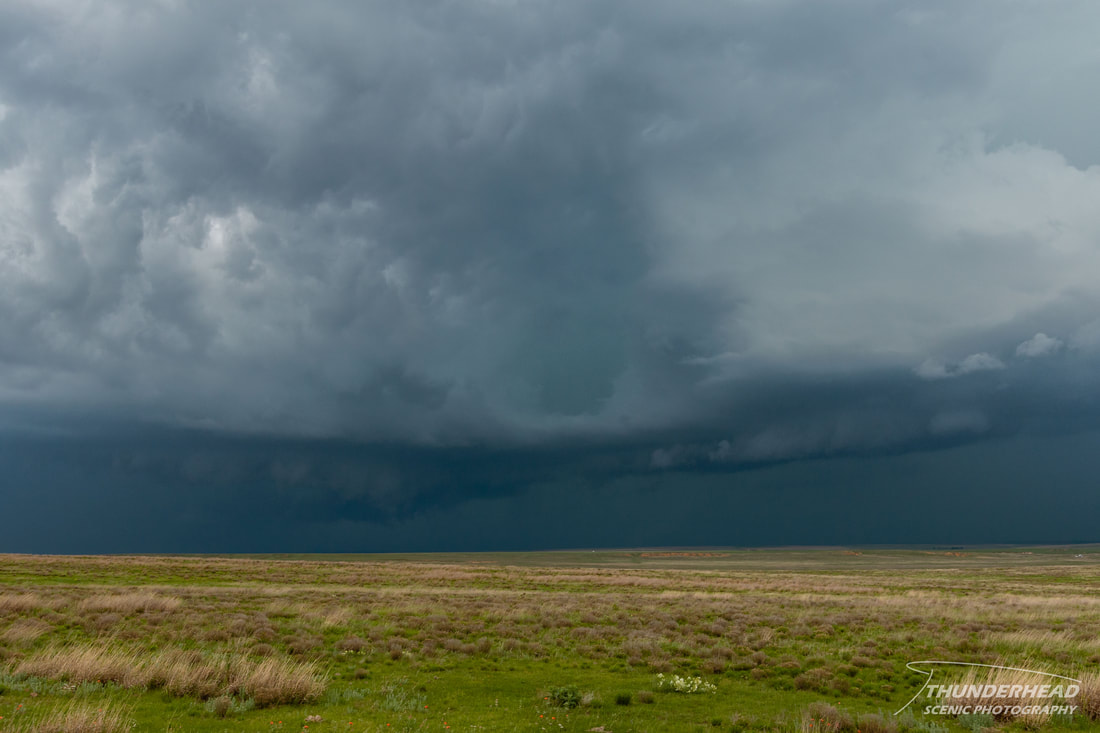 However, it failed to be very photogenic or particularly organized. It eventually began to look outflow-dominant, so we decided to bail on it and head south to another storm, as the models indicated the southern storm(s) would become more dominant in the evening.

We approached the southern storm’s base near Lakin, KS, and it was unfortunately fairly uninteresting and featureless. However, it quickly ramped up, becoming tornado-warned as we watched it suck up dust and produce a huge RFD cut: 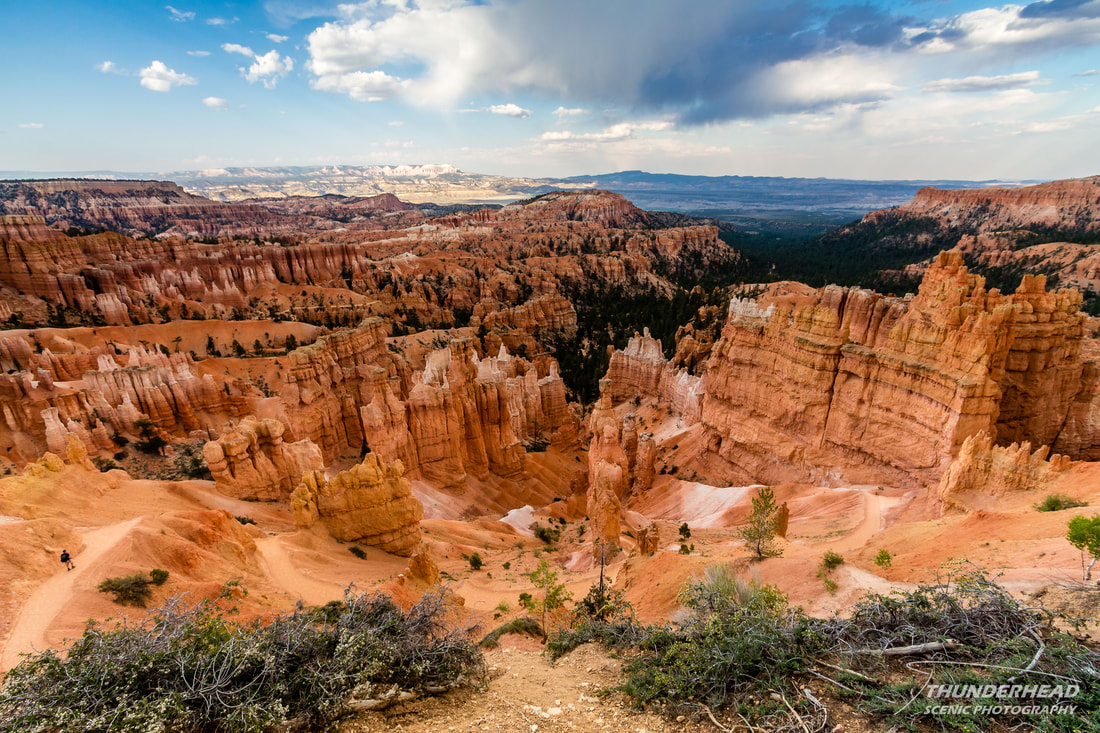 It looked as if it was going to produce a tornado right in front of us, but alas, it did not, and we made our way eastward to Garden City to stay ahead of it as it exhibited classic structure and a long inflow tail: 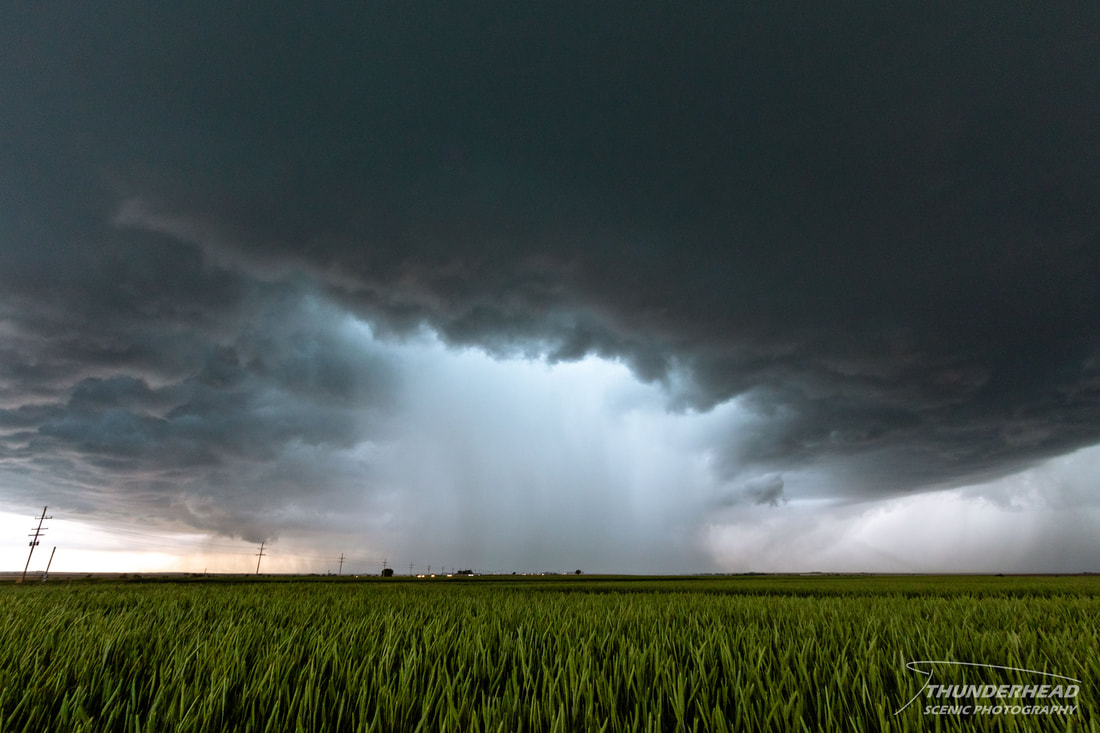 South of Garden City, we let the storm approach our position and watched as it displayed laminar structure: 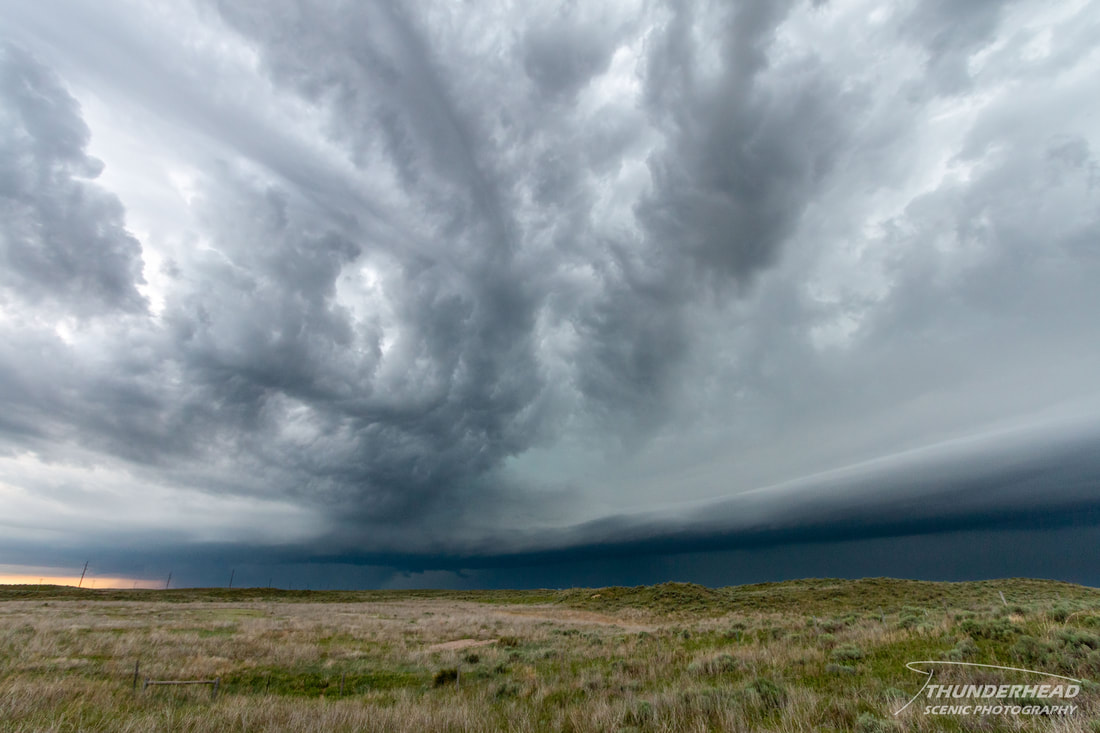 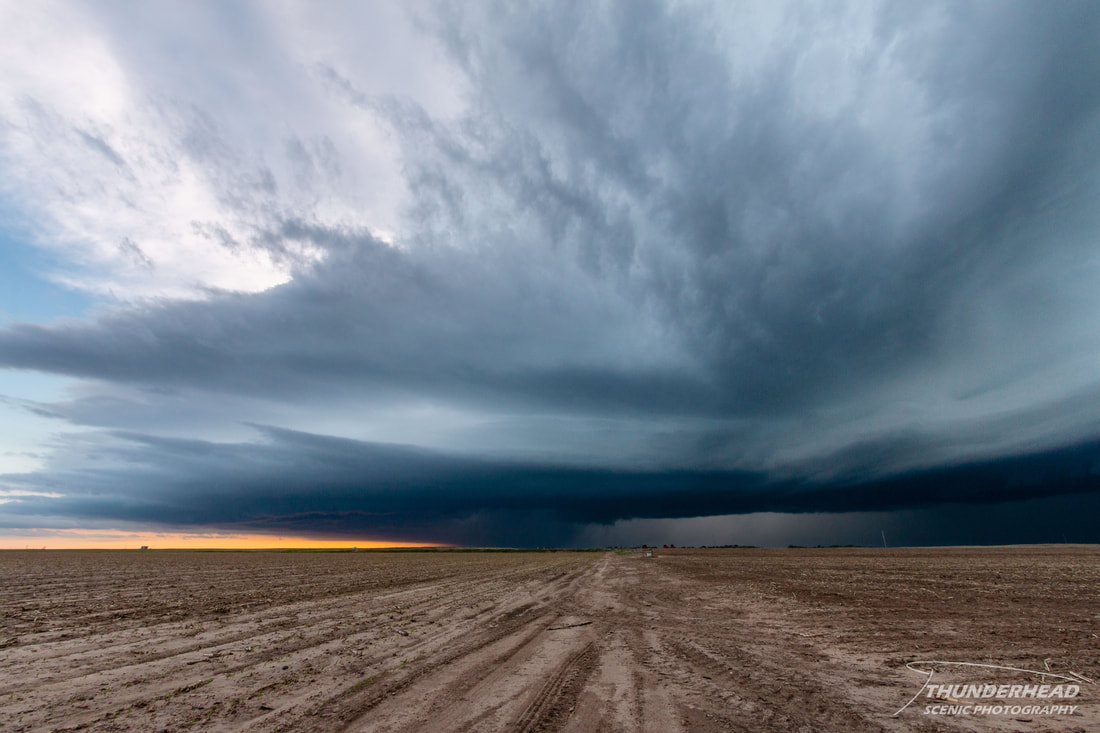 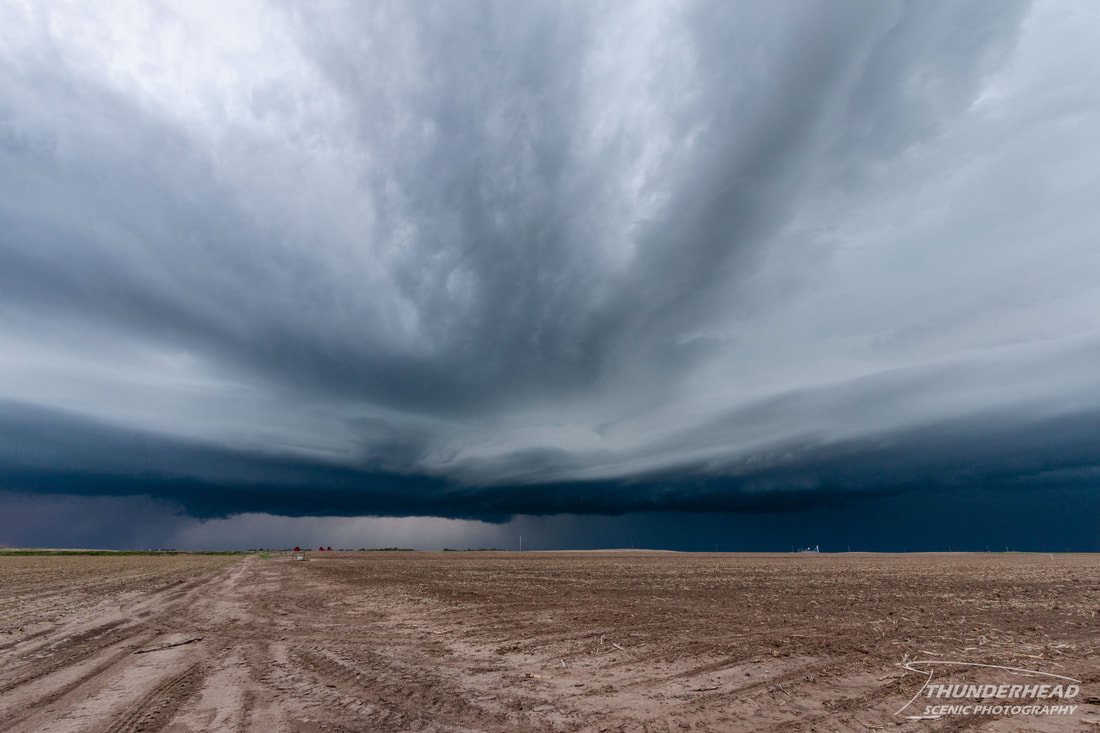 Needing to reposition, we once again ran into the issue of dirt roads, so we dove southward on paved roads. Once we got to a west-east road, we were able to see its structure in the setting sun:
We stayed with the storm as it continued eastward and began an inter-cloud lightning display. The nearly full moon to our backs provided interesting backlighting - something that I had never experienced before: 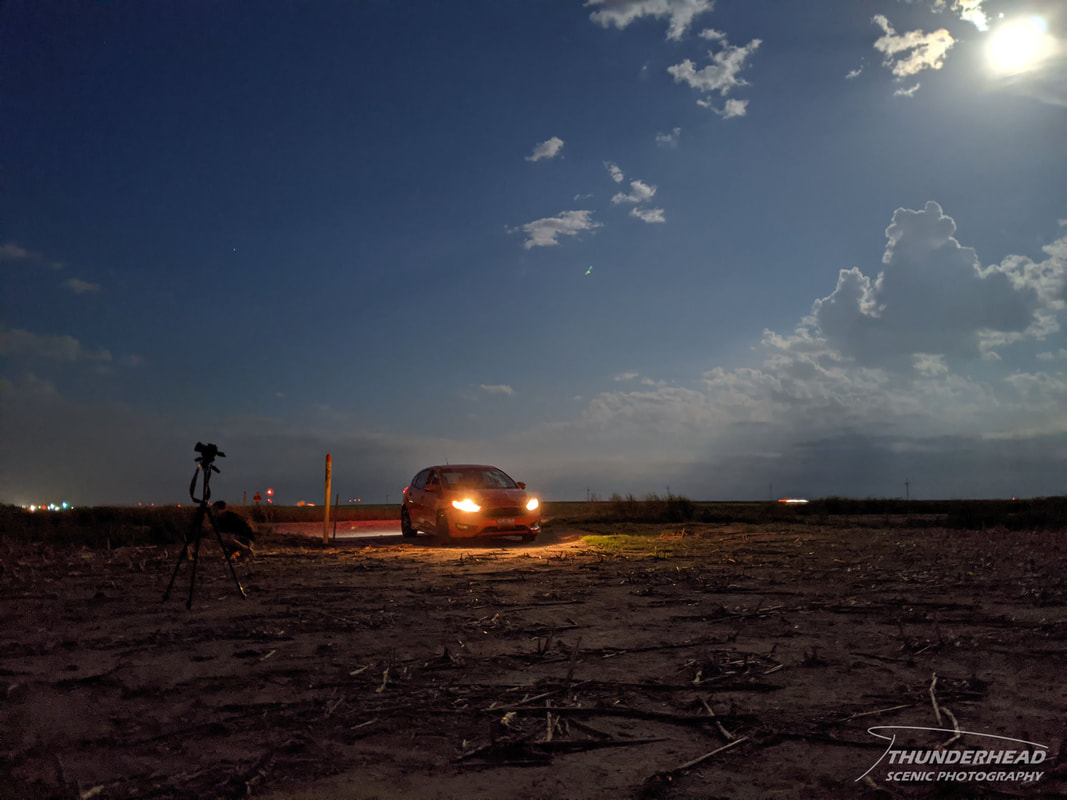