If we were going to see a tornado on our "chasecation", today was the day. A decent setup for supercells and tornadoes was coming together near Denver, CO, enhanced by the Denver Convergence Vorticity Zone (DCVZ). Given that I had never really chased or forecast in this area, I had never heard of this, but it's a cool phenomenon that affects Denver and northeastern Colorado's weather. We left the hotel at about 11am and headed north on I-76 to Hudson, CO to wait for initiation. A couple of storms were really trying to get their act together, but were taking their good, sweet time doing so. Finally, a storm just to the south of downtown intensified and went severe-warned. It was moving to the northeast, right over the heart of the Denver area. We headed south on Highway 79 in order to try to cut in front of it. During this trip, it went tornado-warned as it exhibited a large base and a ground-scraping wall cloud. On our way south on Highway 79, we took a few detours on back roads in order to get a better view of the storm: 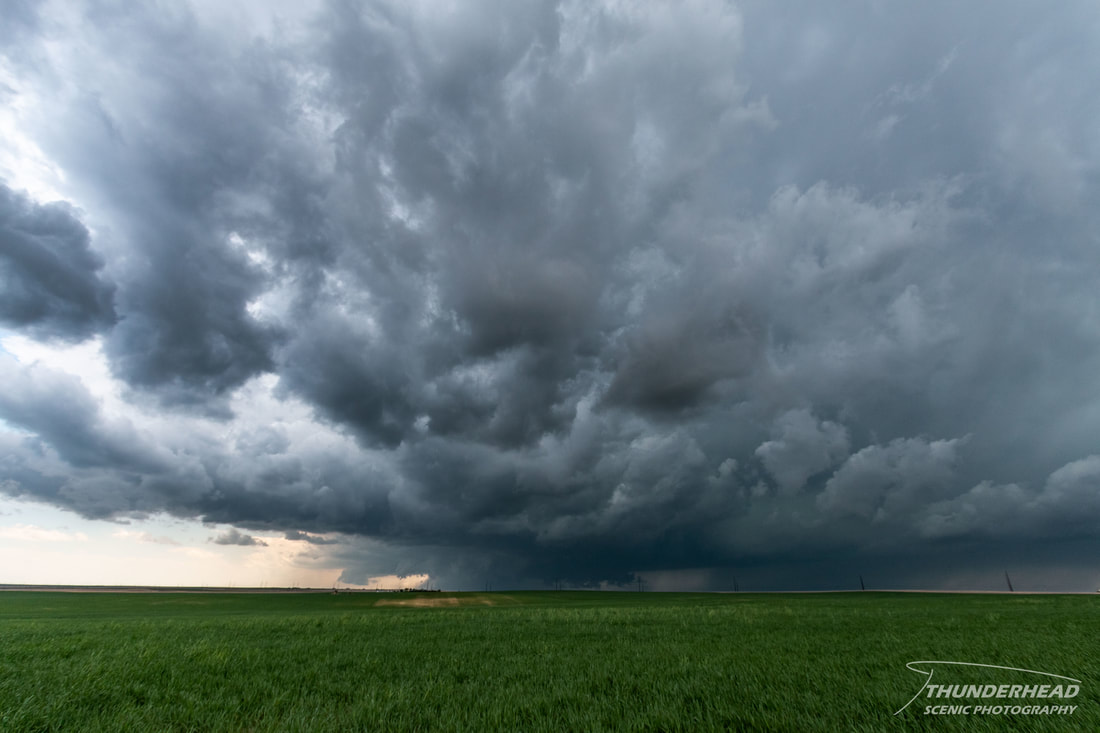 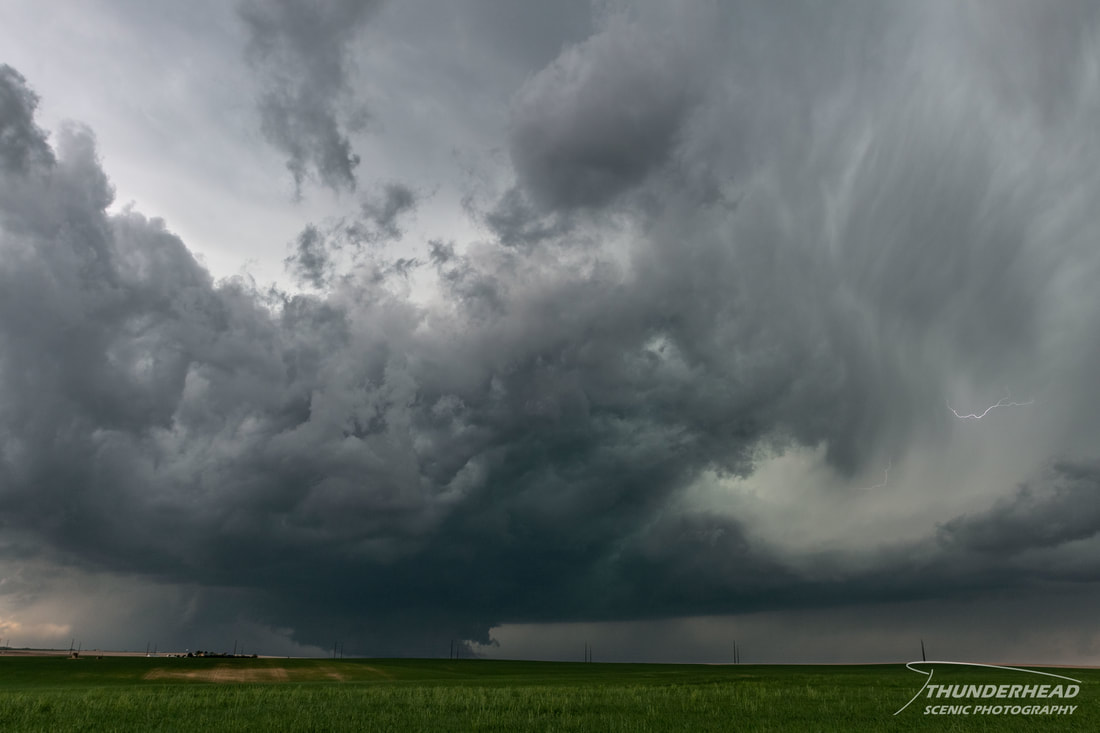 As it got closer, we made our way down Highway 79 toward Bennett, CO, stopping periodically to get pictures: 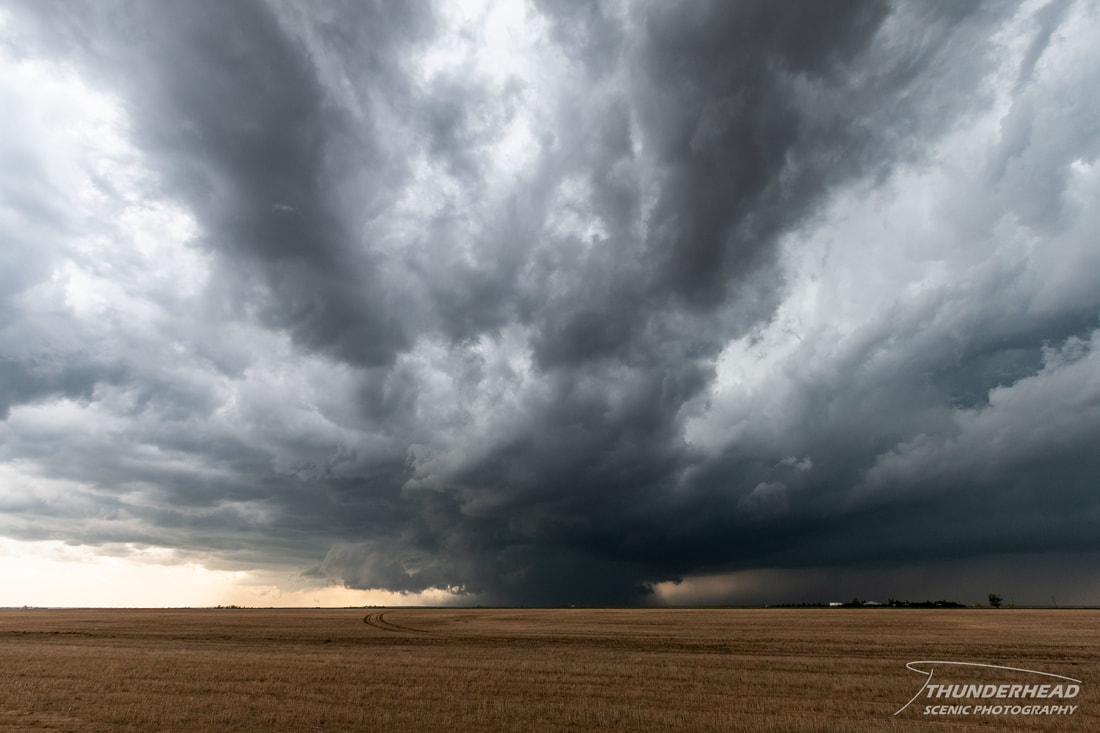 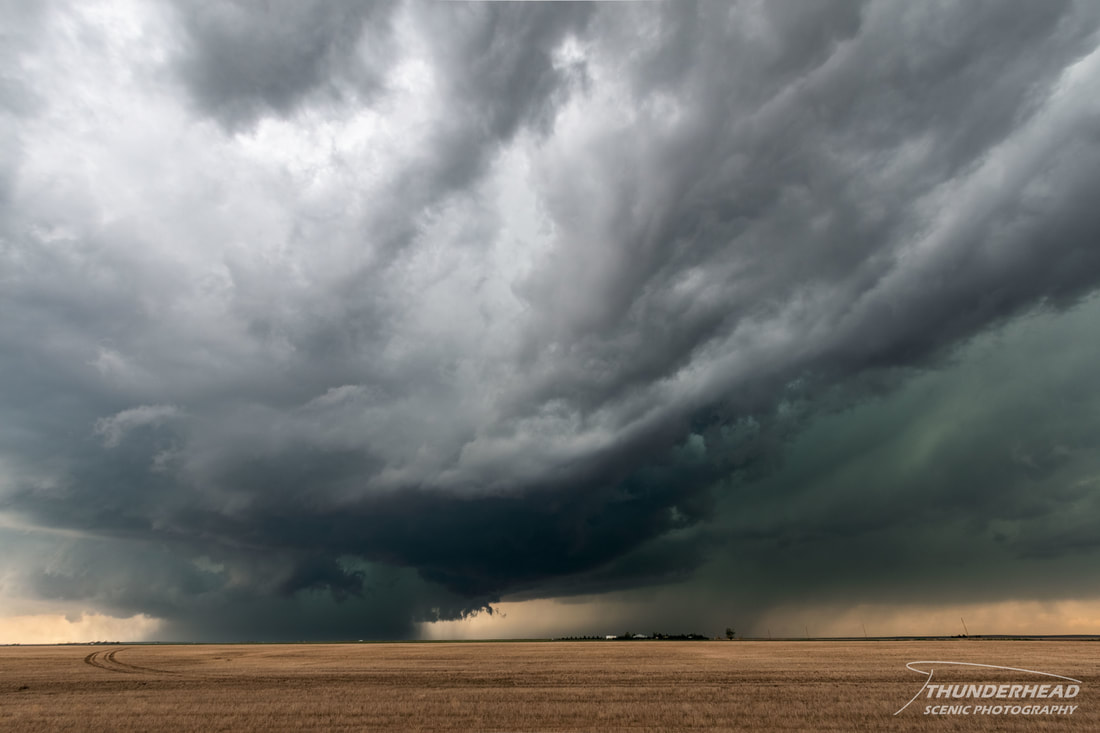 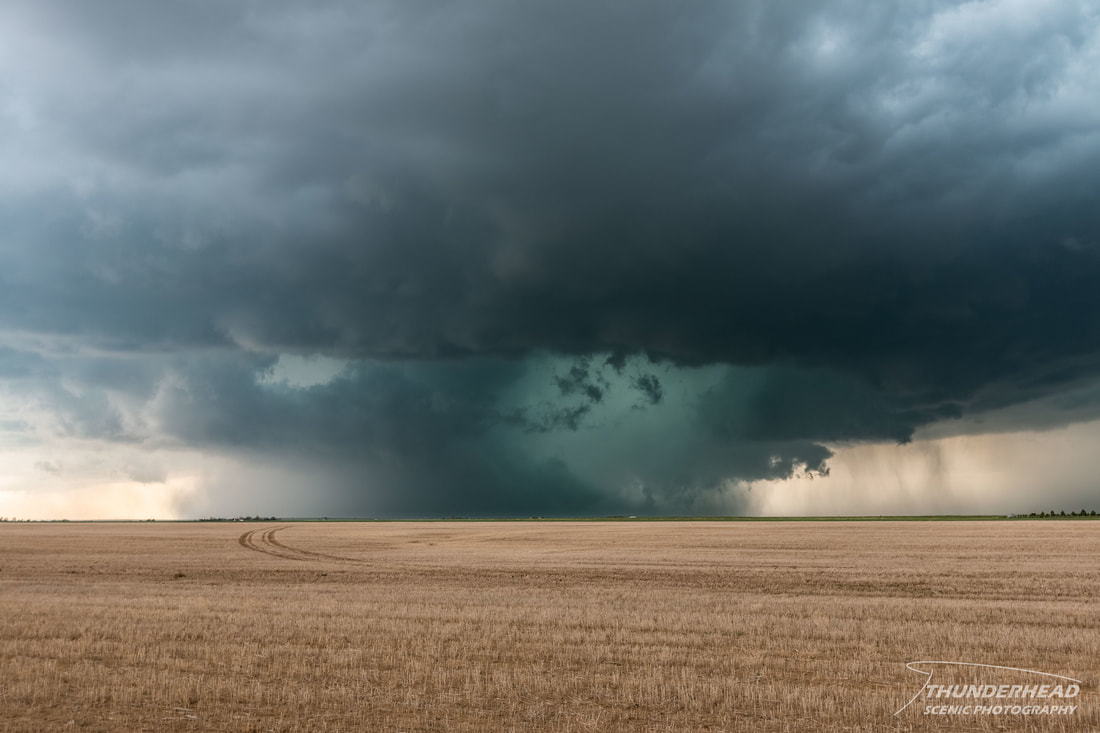 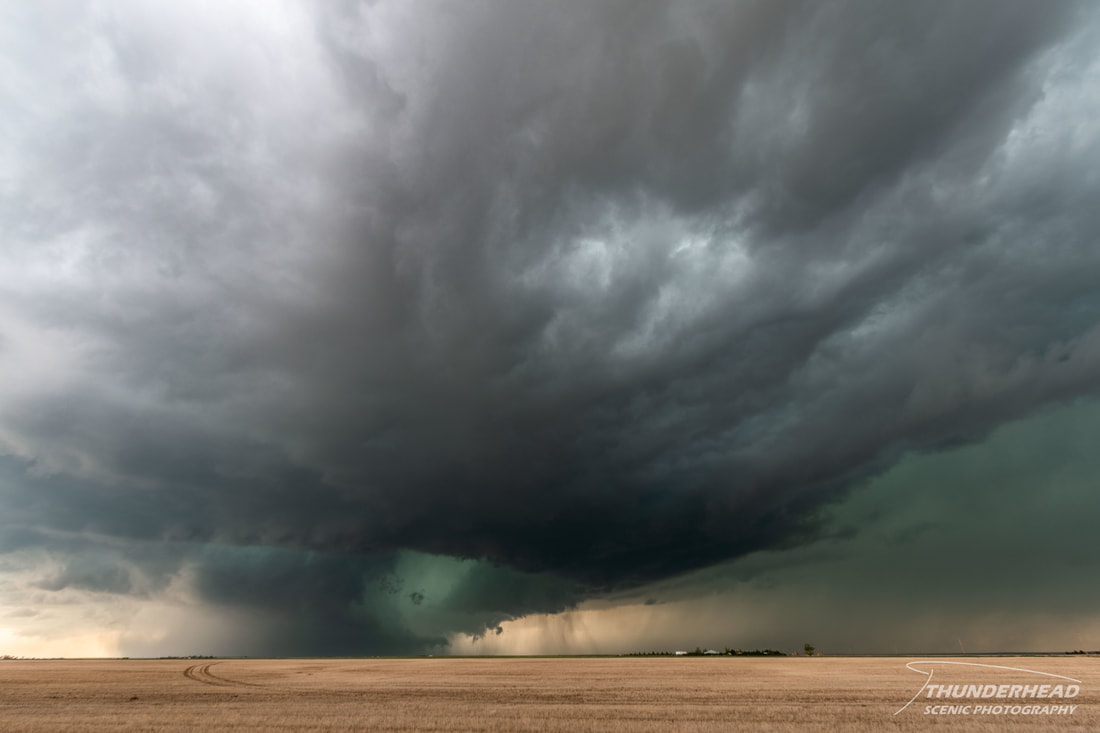 We finally got to the southeast of the storm where we could view the wall cloud where it wasn't nearly completely wrapped in rain: 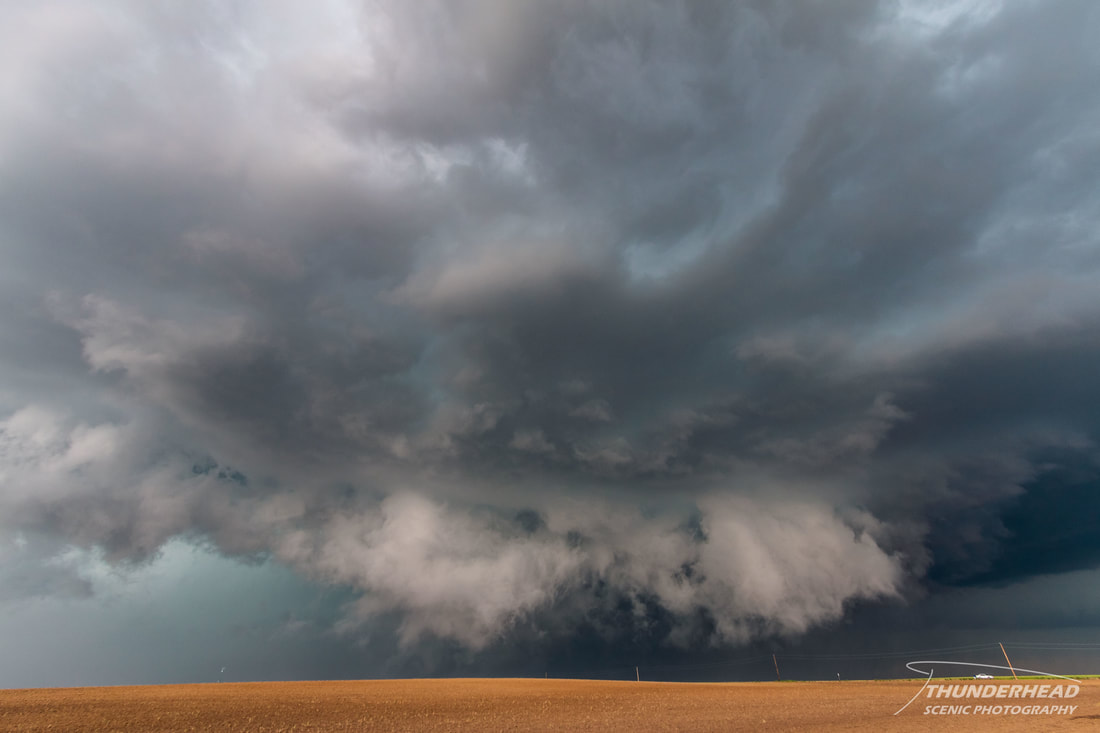 After reaching Bennett, we jumped on I-70 to get out of its way, as it was pretty much right on the interstate moving eastward. We got off in Byers, CO to get on Highway 36, which leads directly eastward as I-70 makes a southeastward turn here. One thing to note is that even though multiple supercells were forecast to form on this day, this was the only one. So, after a while, everyone and their grandma was on this storm and on this one main road that was perfect for keeping up with it. At this time, a huge rear flank downdraft surge (the two photos below) swept across the interstate and Highway 36, pushing everyone eastward to get out of the way. Holy chaser jam! I have never seen anything like it before in person and would rather not again. We fortunately got out of there and jetted far to the east to hopefully get away from the masses, but still be able to see the storm. 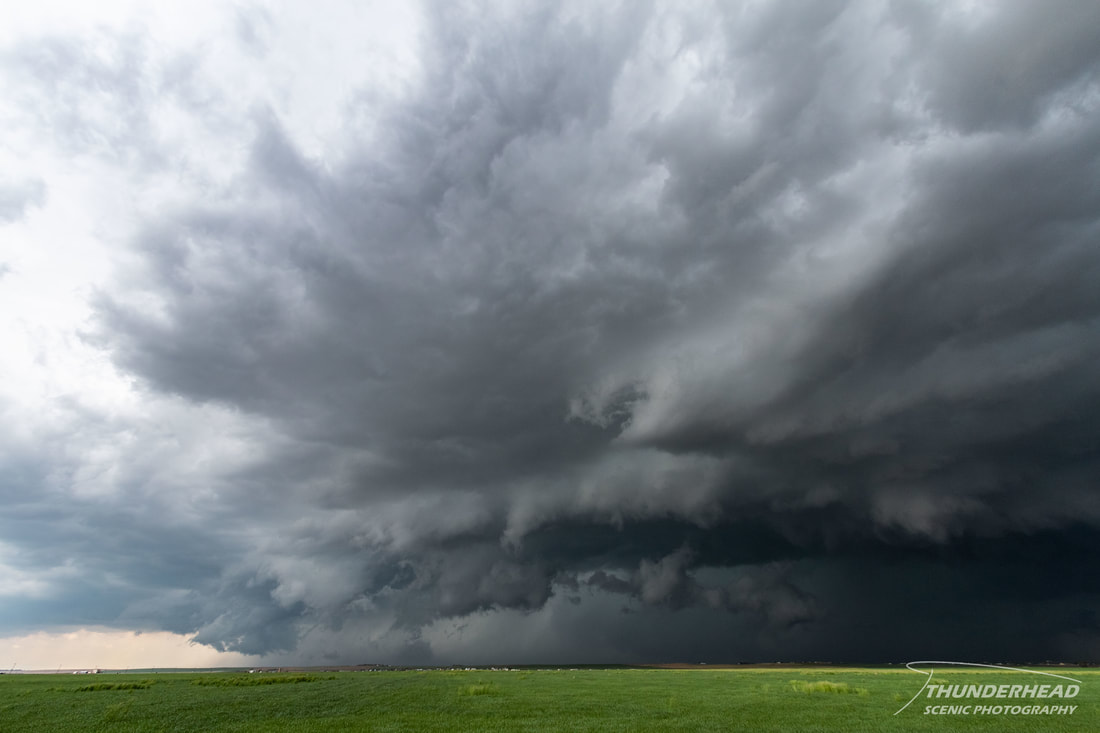 Below is a GIF of reflectivity and storm relative velocity from KFTG showing the supercell as it exited downtown Denver and tracked along I-70. Toward the end of the loop, you can see the dramatic rear flank downdraft surge sweeping across Highway 36 near its intersection with I-70:

At this point, unorganized convection was popping up to the south and moving northward toward this storm. Figuring this new convection would really muck things up and kill this storm in the end, we bailed on it and headed west toward Denver. As we continued back to Bennett to get on I-70, we noticed the horizon to the north was white with hail. We tried to get close to this area, but wet dirt roads made it difficult to get too close and my car’s suspension was taking a beating. Lots of small hail looked to cover the ground at a depth of about 2 inches or so. This was one of the most expansive hail swaths that I’ve ever witnessed. In the photo below, you can see hail covering the road and the hills off in the distance: 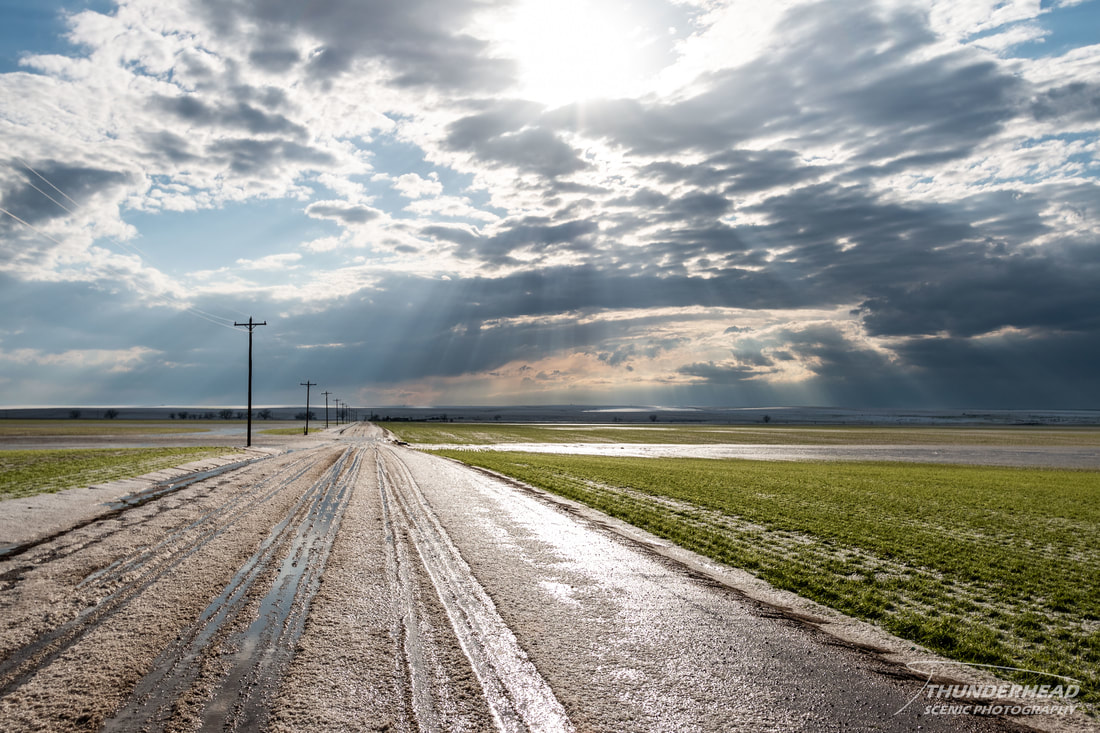 We also came across a tree that appeared to have been struck by lightning and had its bark blown off (photo below). This day was rather disappointing given we had such high hopes. There were several EF0 tornadoes confirmed on our storm, but we failed to see any of them. Judging from video I've seen, they were all extremely short lived and not fully condensed, so that didn't help. After reaching the interstate, we made our way down to Pueblo, CO where we stopped for the night. We felt that this location would put us in good positioning for the next day's setup...or so we thought. 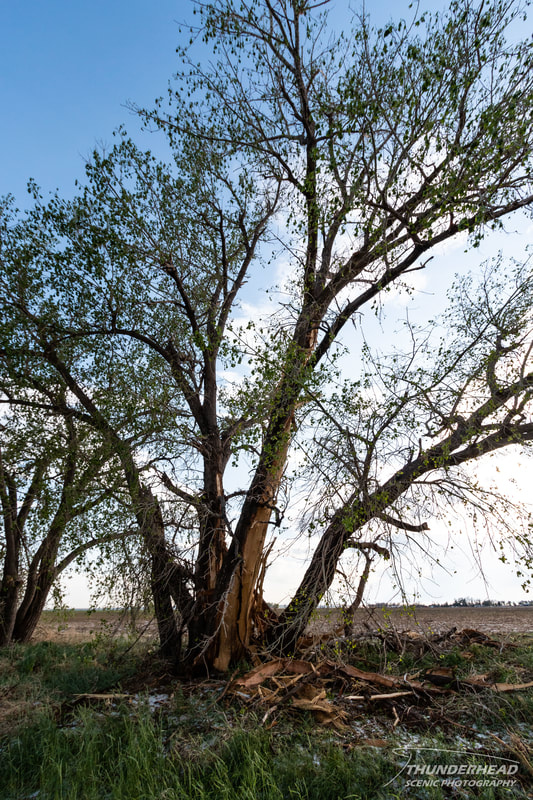