A brief supercell in central kansas and a bust in oklahoma

This day’s target was central and eastern Kansas, where an occluding low would provide enough spin, and cold temperatures aloft would provide enough instability for possibly some supercellular storms and maybe a quick tornado. Michelle and I left St. Louis, MO early in the morning for our initial target of Salina, KS. As we passed through eastern Kansas, we grew concerned of the amount of cloud cover limiting surface heating in that portion of the state, so we felt more confident about pushing west. We approached Salina around the same time that a strong north-south-oriented band of storms was moving toward the city from the south/southwest. Visible satellite showed clearer skies behind this band, so we moved southward on I-35 to get behind it into what was hopefully a better air mass for discrete storms. There were numerous showers and storms forming behind this line in the open air, and one of them was particularly strong. We intercepted it near Lyons, KS as it became severe-warned for large hail. It began to develop weak, broad rotation on radar and displayed supercellular characteristics visually:
It looked its best as it approached Langley, where we stopped to take in its structure: 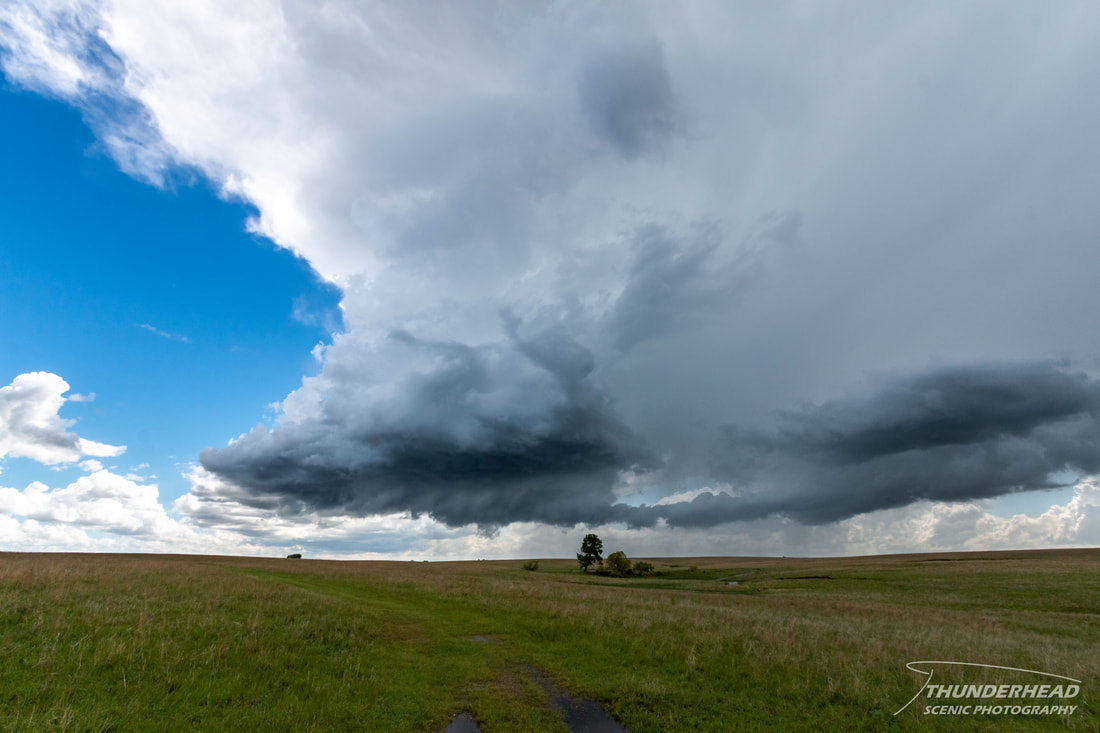 We repositioned north of Marquette, where the storm began to lose its low-level features completely and fall apart:
​​​The Storm Prediction Center's summary for this event can be found HERE.

Today was the start of a very tricky chasing period. There were a couple of targets to choose from: central Oklahoma along the dryline or along a stationary front over northeast Oklahoma into southeast Kansas and southwest Missouri. Both targets ran the risk of dealing with the sky-high chaser numbers typically associated with any chase in Oklahoma. However, the latter target was in terrible terrain in the eastern portion of the state, and flooding had closed down several roads in that area. While the eastern target was more favorable for storms, the dryline storms would form in more favorable terrain and hopefully remain more discreet, so that’s where we went. Our hope in targeting Guthrie, OK was that we could target storms that formed along the front just to the north or east and avoid Oklahoma City, or catch storms that formed along the dryline after they passed through the metro area.

A severe storm formed mid-afternoon along the Oklahoma-Texas border near Wichita Falls, TX, and was tracking northeastward along the I-44 corridor. Seeing that this was a discrete storm roughly in our target area, we cut through the metro to meet it south of Chickasha near Rush Springs. As we travelled southward, there were some showers and weak storms that developed east of OKC. Even though our target storm didn’t look very organized, these eastern storms looked weak and not particularly explosive. What gave us more confidence to abandon our initial target was a Particularly Dangerous Situation Tornado Watch issued by the Storm Prediction Center for the area our target storm was moving into. These are reserved for when forecasters feel there is a high chance for strong tornadoes in an area.

When cutting through OKC and nearing our storm, we noticed the air was quite hazy. I had recalled discussions from the previous week regarding fires in Mexico producing smoke that may travel northward across the Southern Plains making visibility low this current week. It appeared that had come to fruition, as it was very hard to see. In fact, once we reached our target storm, we couldn’t even see the base or that there was even a storm there! It probably didn’t help that around this time, the storm weakened drastically and was falling apart. At this point, there were no other storms in the immediate area. The previously mentioned showers and storms east of OKC eventually did explode, and two became dominant supercells that produced several tornadoes along and north of I-40 near Henryetta, OK. These storms and others went on to ravage northeastern Oklahoma and southern Missouri with tornadoes, and unfortunately cause several fatalities and numerous injuries.

​​​The Storm Prediction Center's summary for this event can be found HERE.