This day’s forecast seemed a little more clear-cut than the prior days. A surface low was to track across Kansas, spawning supercells near the Kansas-Nebraska border with an additional threat southward along the cold front across central Kansas and into Oklahoma. The greatest tornado potential appeared to be near the warm front close to the low in northern Kansas, so that was our target. One issue, though, was that the previous night’s convection had produced an outflow boundary that was racing southeastward across Kansas, which would render the air mass behind it unconducive for storms. However, it seemed that the models were washing this boundary out and spawning storms across Kansas in the afternoon. On our way east, we began to catch up to the gust front, where we saw what appeared to be a lenticular cloud developing on top of a shallow updraft: 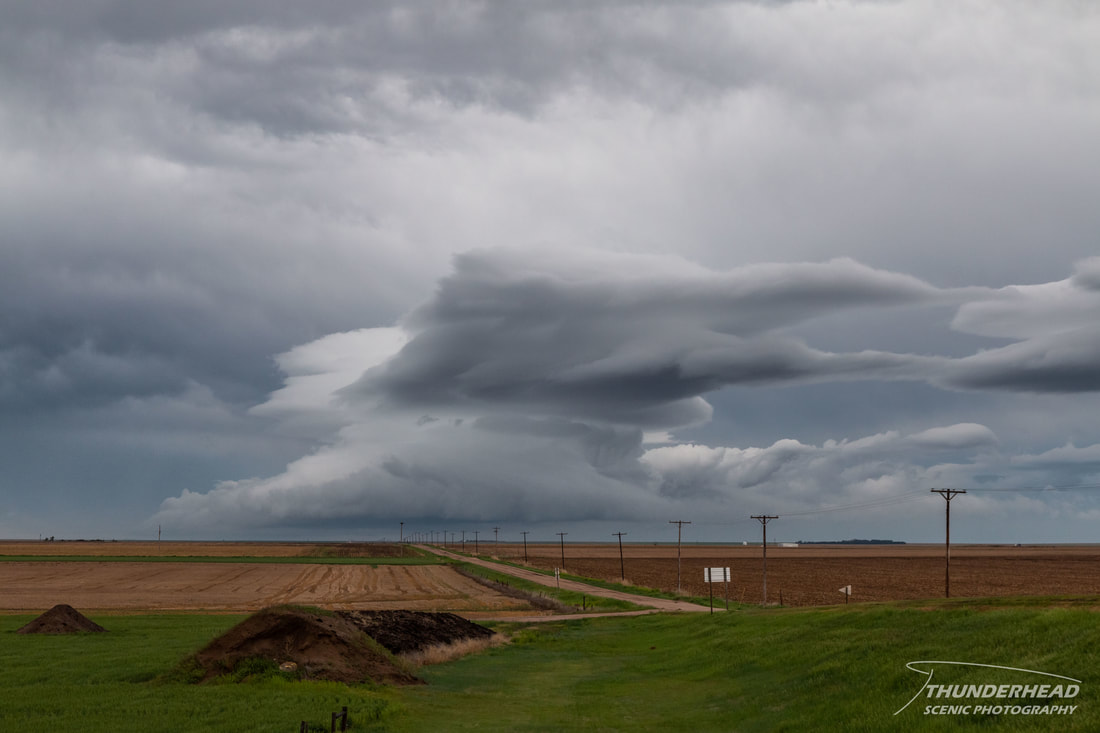 We eventually beat the boundary and made it to our initial target of Salina, KS where we sat and waited for storms to develop. The boundary proceed southeastward and began to force convection in extreme southern Kansas and northern Oklahoma. While these storms looked somewhat supercellular at first, they eventually became disorganized and grew upscale into linear segments, lessening their tornado potential. Michelle and I stayed put and waited for our northern target. After some time, we had to begin moving east to stay ahead of the front. We eventually made it to Highway 99, were we stopped and waited some more. Occasional blips would show up on radar in northern Kansas, but they would last about 10-15 minutes before disappearing. As we had traveled east, a line of storms had developed to our south in the general area north of Emporia, KS/I-355. Relocating so we could see them better, we noticed the tail-end storm appeared to be somewhat supercellular: 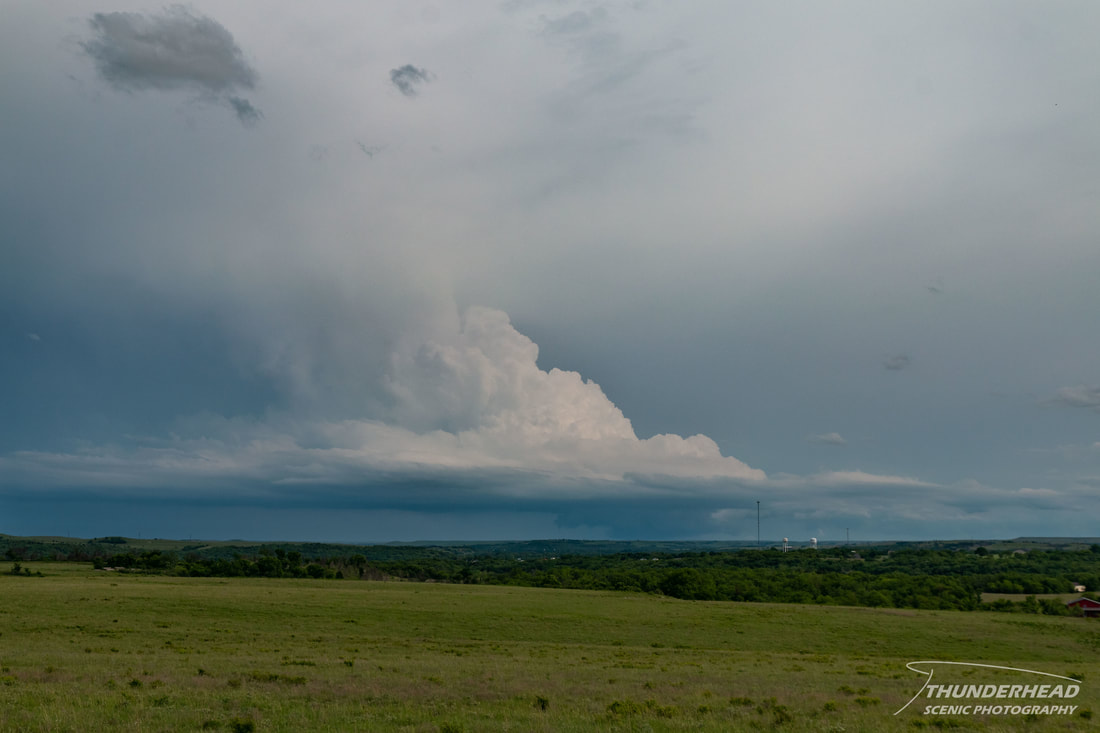 While the updraft looked okay, and it did have a lowering, the updraft was too tilted and the reflectivity signature on radar was growing weaker by the minute. While this storm didn’t hold much promise, the line it was apart of began to break up into 1-2 relatively discrete storms that were generally moving toward Topeka, KS. We moved eastward to try to intercept these, but they too quickly died. Seeing as there were no additional storms in the area and storms had still not fired in northern Kansas, we called it a day and began to make our way home. We entered western Missouri shortly before sunset and were beginning to catch up to a bow echo that had formed from the previously mentioned storms in southern Kansas/northern Oklahoma. The clouds to our west were fairly thick, but began to break up near sunset; allowing the backside of this storm system to be illuminated: 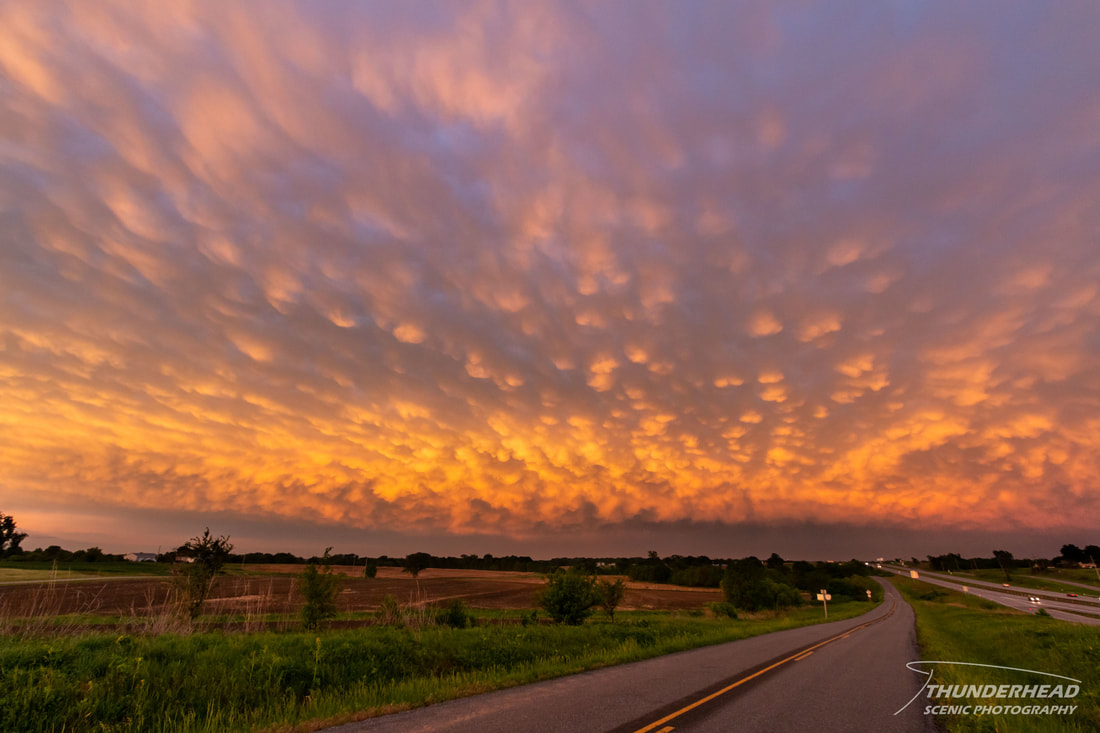 While this day was mostly a bust, this sunset was beautiful. The situation in northern Kansas had thrown a lot of forecasters and chasers. The models continuously had a good environment and produced convection in this area, but the surface observations showed a near-surface environment that was not conducive for storm development; most likely due to the outflow that pushed through earlier in the day.