Around 11am, we left Sidney for Cheyenne, WY, where we thought we’d be in a good central location when storms initiated. We stopped at a park to eat lunch and watch convection fire, or at least attempt to. We waited for some time, but seeing that this convection was fairly lackluster, we decided to call it a day. It just seemed like the updrafts couldn’t get high enough before being sheared off. When we got back to the hotel, we decided to take a nap, since doing nothing all day is exhausting. As I was laying down, I was watching the radar and noticed that a storm way to our west looked like it wanted to get its act together, but I didn’t think much of it. I dozed off for a bit only to wake up after having one of those falling dreams. I checked the radar right away to see that this storm did get its act together and was a severe-warned supercell rolling down the interstate right for us. We hurried out and went west on Lincoln Highway a couple of miles and watched the mesocyclone start to get some shape to it: 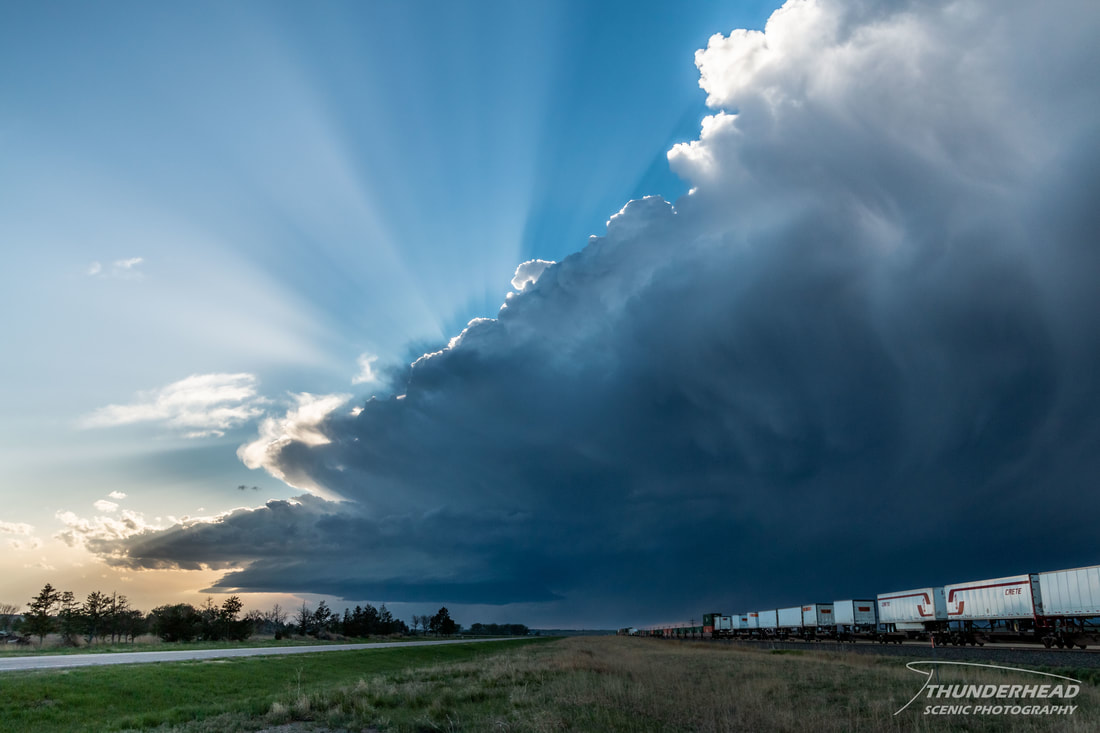 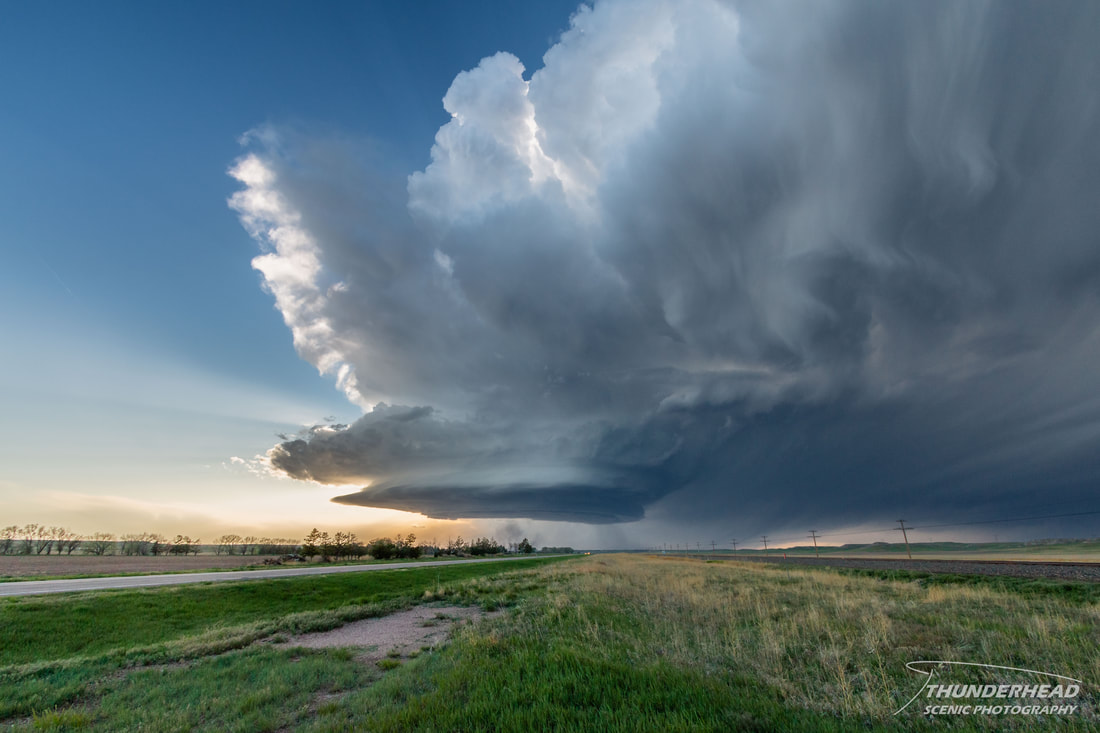 Here's a quick time lapse of the storm as it approached. This was taken between the photo above and the next photo below:
There was also a storm to the north that was displaying some structure. However, the storm directly west of us was looking better and better by the minute. It was classic, striated, and simply beautiful: 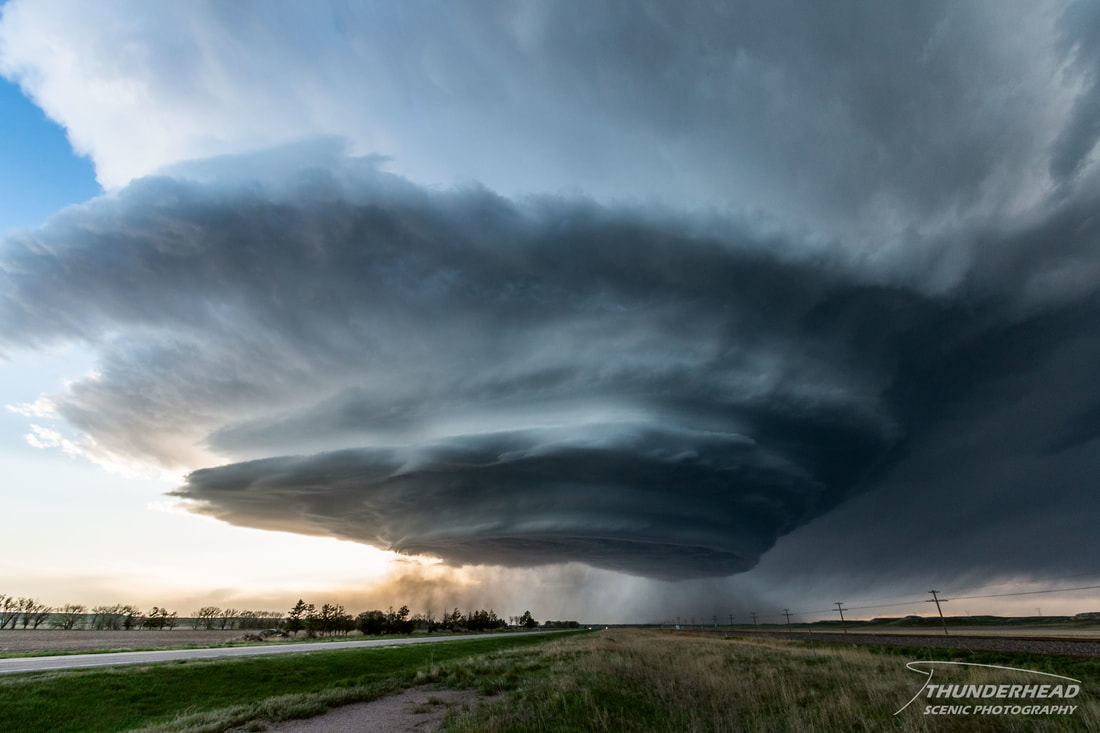 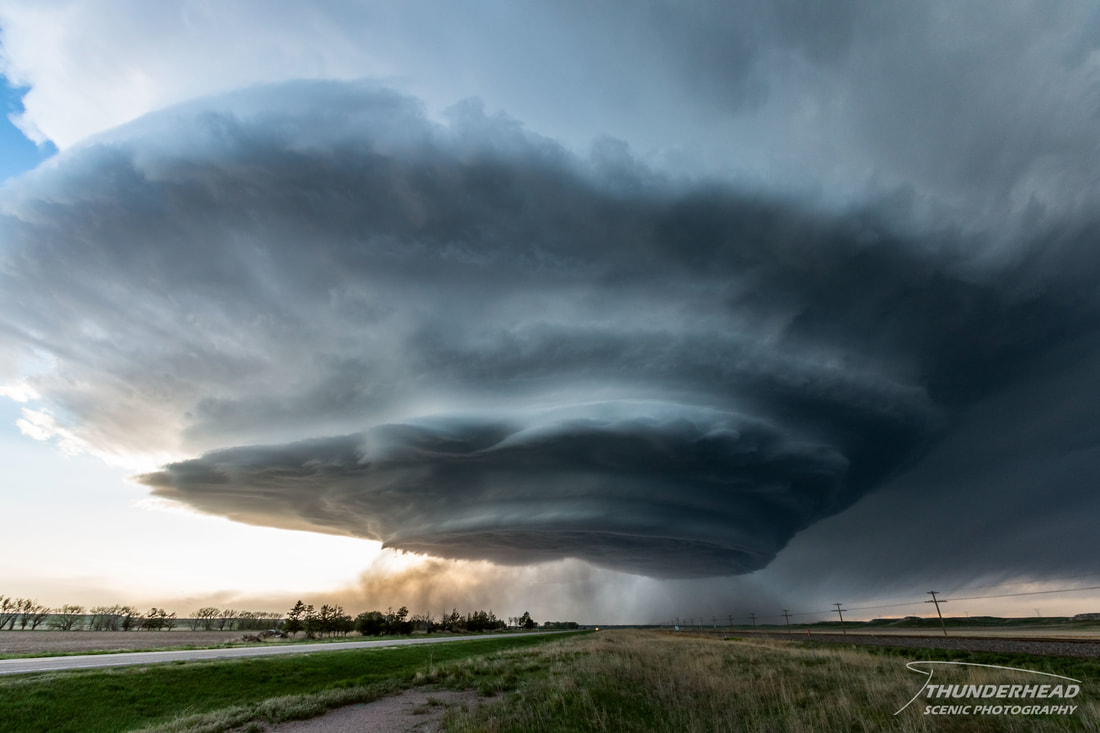 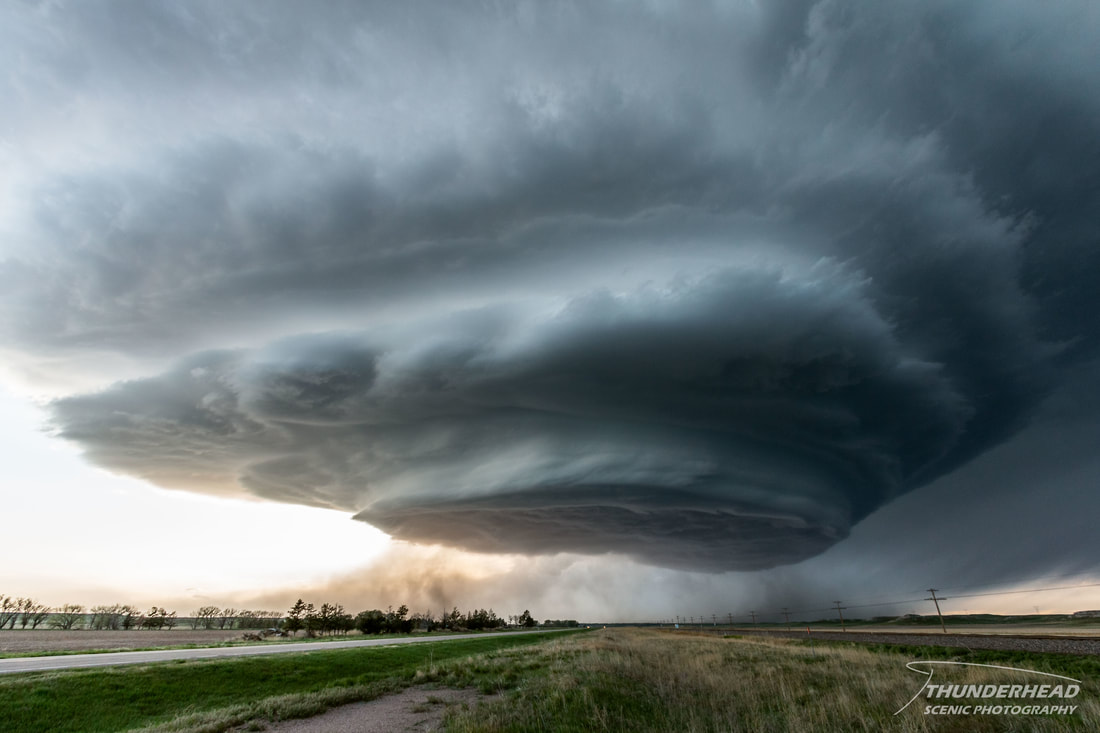 We let it get pretty close to us (the above photos were taken at 10mm), given that it was only moving at about 15mph, and then decided to move back east. We stopped briefly to take a few pictures as it began to approach Sidney: 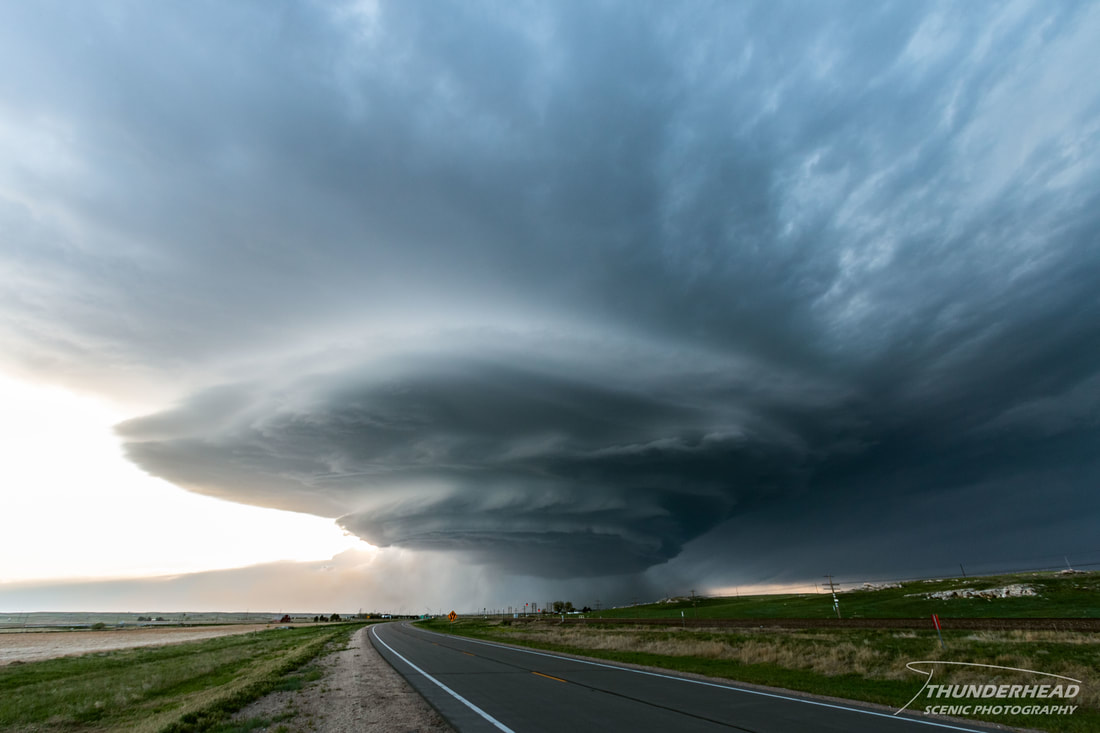 While we were stopped, the northern cell went developed strong rotation and was tornado-warned. We went north on Highway 385 to try to get a view of it, but then decided to move east because the storm to our west was starting to overtake us. Unfortunately, the only eastern options were dirt roads, which is less than ideal, but you have to do what you have to do. We could see a lowering to the north associated with the northern storm, but it didn’t look too promising. The western storm was still gaining on us and roads were dicey, making forward progress not as great as we had wished. Not long after we started taking these roads, we ended up trying to bail to the south as the rear flank downdraft of the western cell was kicking up too much dust to see. It was also stirring up little vortices that were moving through the fields next to us, which was a little unnerving. We got back to Lincoln Highway and attempted to get back on I-80 when the western storm started dropping dime- to nickle-sized hail on us. While that’s not big enough to dent your car noticeably, when you’re in your car, it sure sounds like it. I was waiting for the rogue ping-pong-ball-sized stone to hit us, but fortunately that never happened. We finally reached I-80 and got out of the precipitation just enough to pull over and take a few pictures of the back side of the storm, which was very pretty with the sunset lighting it up: 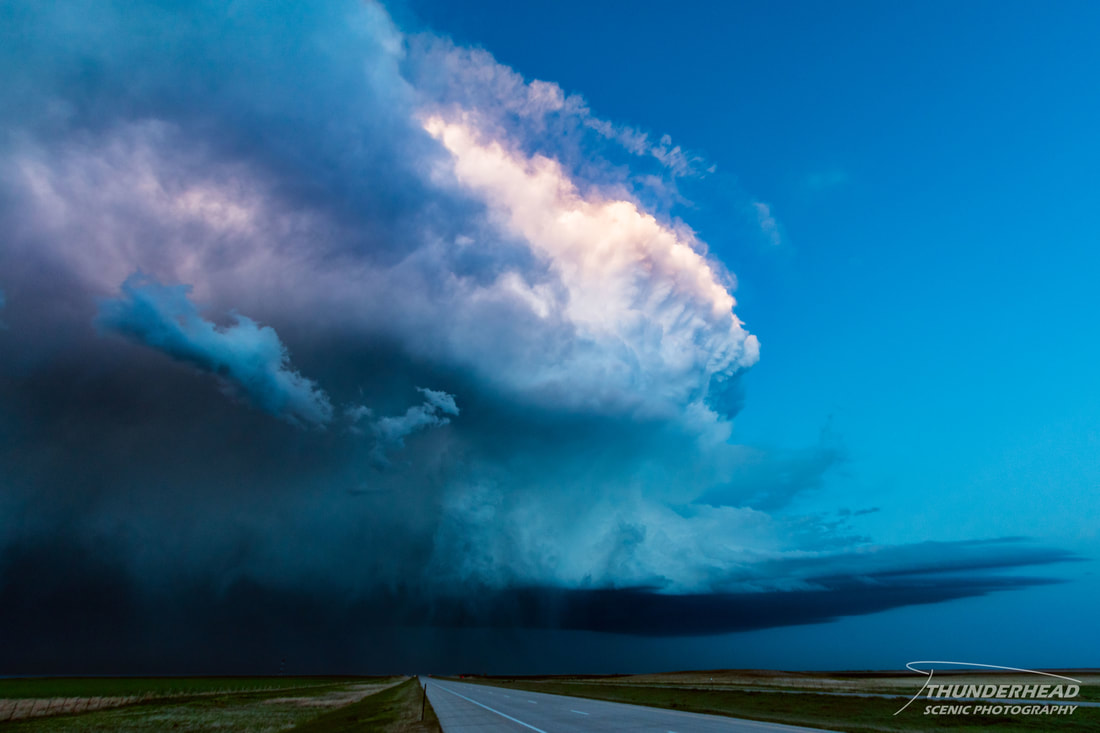 I’m not a fan of pulling over on the interstate, but we did so just long enough to grab a couple of quick, visible intra-cloud lightning bolts on the back side of the storm:
We followed it as it passed through extreme southwestern Nebraska and northeastern Colorado. It put off some great lightning and stayed mean for quite some time as we pulled over several times to grab lighting shots: 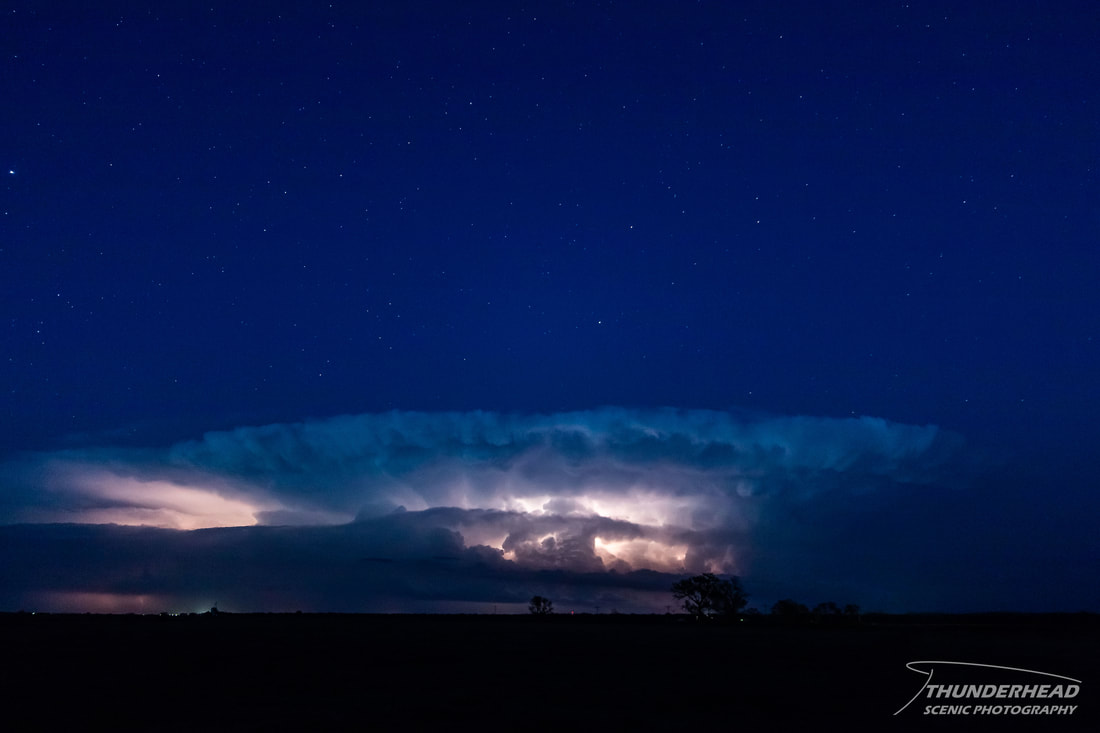 Unfortunately, it ended up moving too far south for us to catch up to and we called the chase in Julesburg, CO and headed back to Sidney for the night.