Similar to the days prior, the forecast for this day was difficult. A surface low was going to come out of the Rockies and spawn storms mainly in eastern Colorado and western Kansas. However, the storms from the previous night had produced outflow that pushed far into Colorado. This, paired with expansive cloud-cover over eastern Colorado, lessened the storm chances in that area. We decided far-eastern Colorado would be best, but as we travelled there, our target changed to southwestern Kansas. Eventually, storms fired well to the west along the Front Range in Colorado and well the to the south across the Panhandles, but not where we were, of course. As these storm clusters approached our area, a storm developed just to our south near Syracuse, KS. It wasn’t much, but looked better than some of the other piddly updrafts that had attempted to develop in the area: 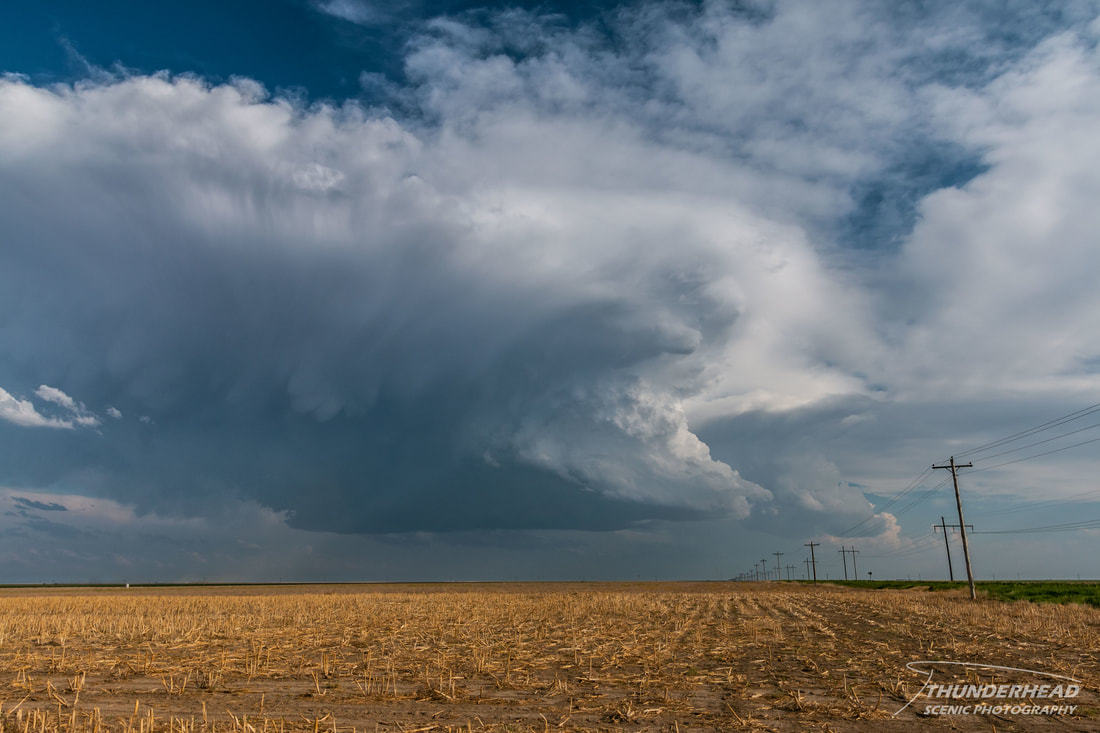 Upon closer inspection, it appeared that this updraft was rotating clockwise...which would make it one of the shallowest, highest-based, anticyclonic supercells I’ve ever seen. We drove closer for a better view and noticed that what we were seeing was a left-split, with the base of the right-split in the background:
We watched this for quite some time. While not overly impressive, it was great to see this little updraft bubble vigorously and spin. As is what typically happens, the left-split died and the right-split remained. Not that it had much chance anyway, but convection moving up from the south and developing in the general area began to interfere: 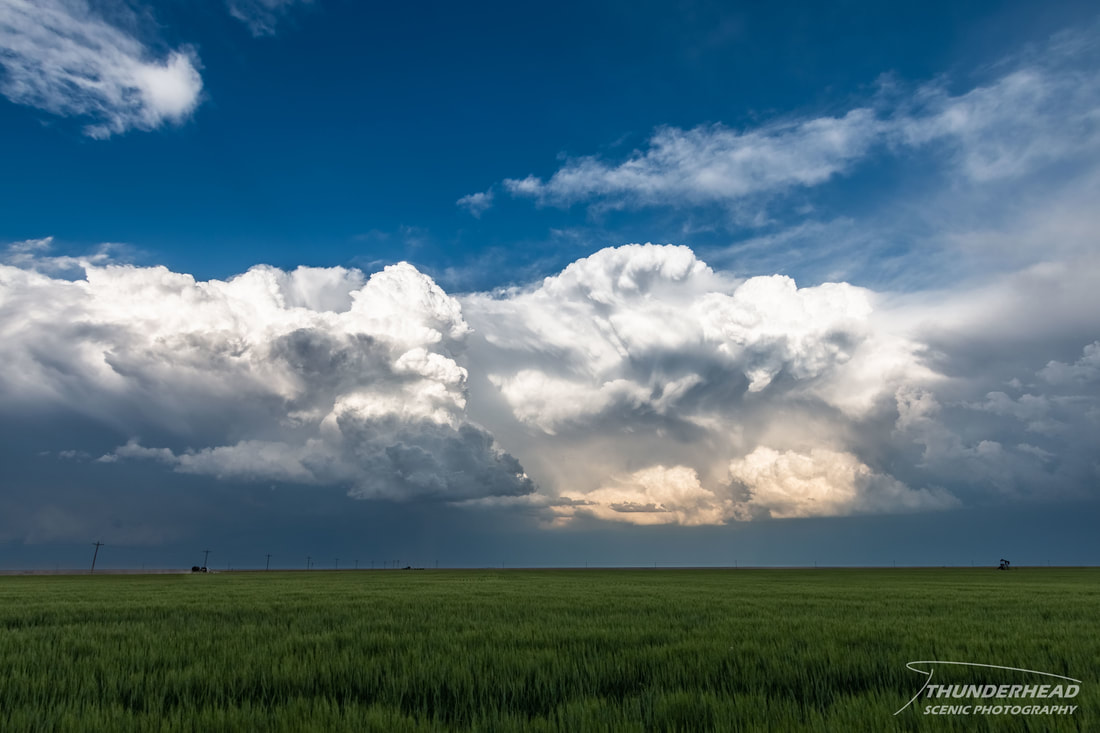 Seeing as there wasn’t much to hang around for, we felt it best to thread the needle and move north between the previously mentioned convection to the south and east and a fierce looking line approaching from the west. As we proceeded north, what appeared to be a very nice supercell developed in northwestern Kansas and went tornado-warned. While it did not produce a tornado, pictures from chasers that were near it showed that it had great structure for a while. It stung a little that we missed it, as that area had been a secondary target. As we continued north, it became apparent that things may get interesting for us. The line of storms to the west had become quite severe and were warned for 80 mph winds as they moved toward us. 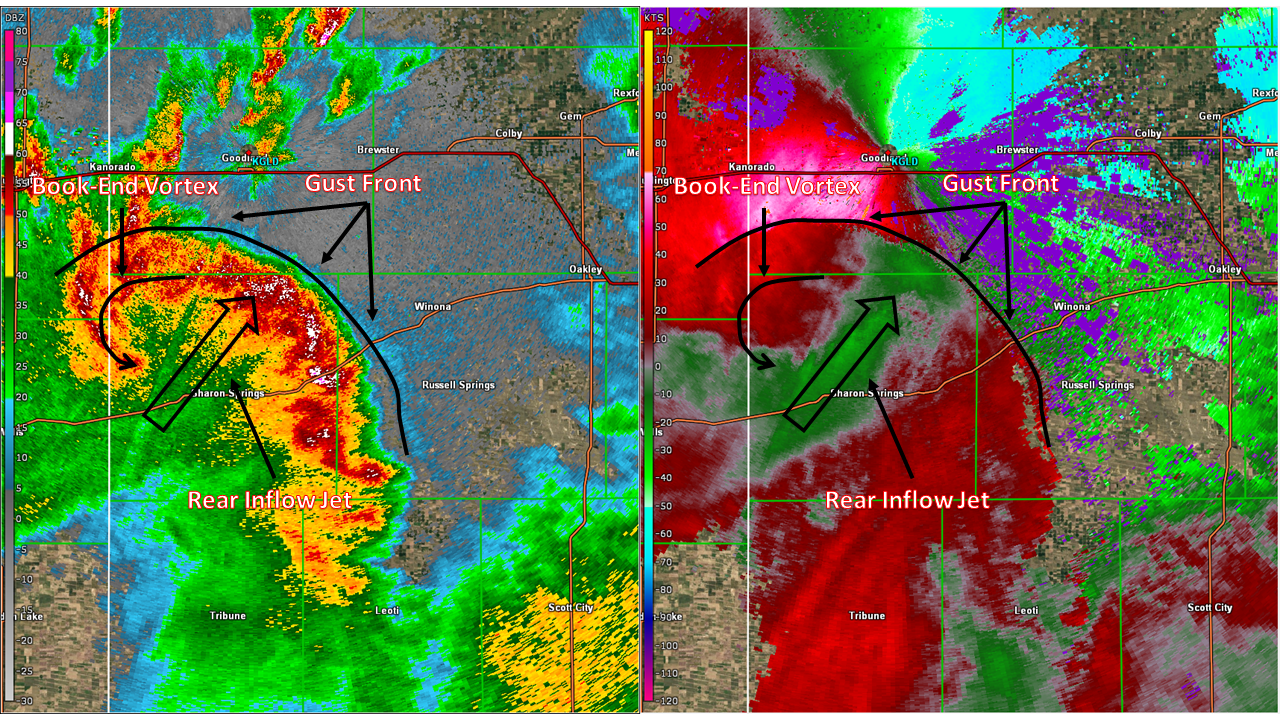 The heavy rain- and hail-producing storms moving up from the south to our east were beginning to cut off any easterly routes, which is the direction we wanted to go. Upon reaching Highway 40, we edged eastward just behind the mess of storms that were over the highway and I-70, making sure we stayed ahead of the bow echo to the west. While some chasers would have just rather punched through either line, I have too much respect for my car to do that, and I hate driving in heavy rain. We eventually made it to Oakley, KS, which had one of the only good hotels in the area, so that’s where we stopped for the night. The bow echo apex looked like it was going to pass us to the west, allowing us to escape the higher winds. However, as usual, mother nature had other plans. The eastern flank of this bow must have oriented itself just right, because mesovortices began forming along the leading edge, with one heading right for Oakley. While these are typically smaller and weaker than supercell mesocyclones, they can still produce strong straight-line winds and quick-hitting tornadoes. From the hotel, we were able to see some interesting features and lowerings to the west, but fortunately the mesovortices weakened and didn’t cause any damage near us.