Tornadic Supercells in Texas and Oklahoma and bust in Kansas

This was the week of Michelle and my 2017 chasecation. The 14th-19th showed signs of activity across the Plains and Midwest about a week or so out. The 14th was out of play for us, as we didn’t want to skip on our families on Mother’s Day, and we would use the 15th for travelling to Oklahoma City, OK in preparation for the 16th. The 16th held good potential for severe weather in the eastern Texas Panhandle and western Oklahoma. A shortwave was to round the base of a trough that was parked over the western third of the U.S. and aid in kicking up convection along the dryline. Supercells were to fire in the mid-afternoon and have the potential of dropping large hail and a few tornadoes. We met up with Marcus (his page HERE), as he had just finished a week of driving for a chase tour, and made our way out to our target of Shamrock, TX. There was going to be several rounds of storms in the western Plains, and as we got to Shamrock, the first round fired to the north in the northern Texas Panhandle and drifted northward. These supercells looked healthy on radar, and did produce some tornadoes, but we held our ground for the second round that would be firing near us. After fueling up in Shamrock, we pushed further west to be closer to the dryline when storms did fire, which happened around 3pm. About 30 minutes after initiation, there were two supercells south of Groom, TX. We headed south to catch the northernmost one, which was now tornado-warned. It appeared to have good rotation and displayed some beautiful mid-level features, but did not produce a tornado before the storm to its south got too close and polluted its environment: 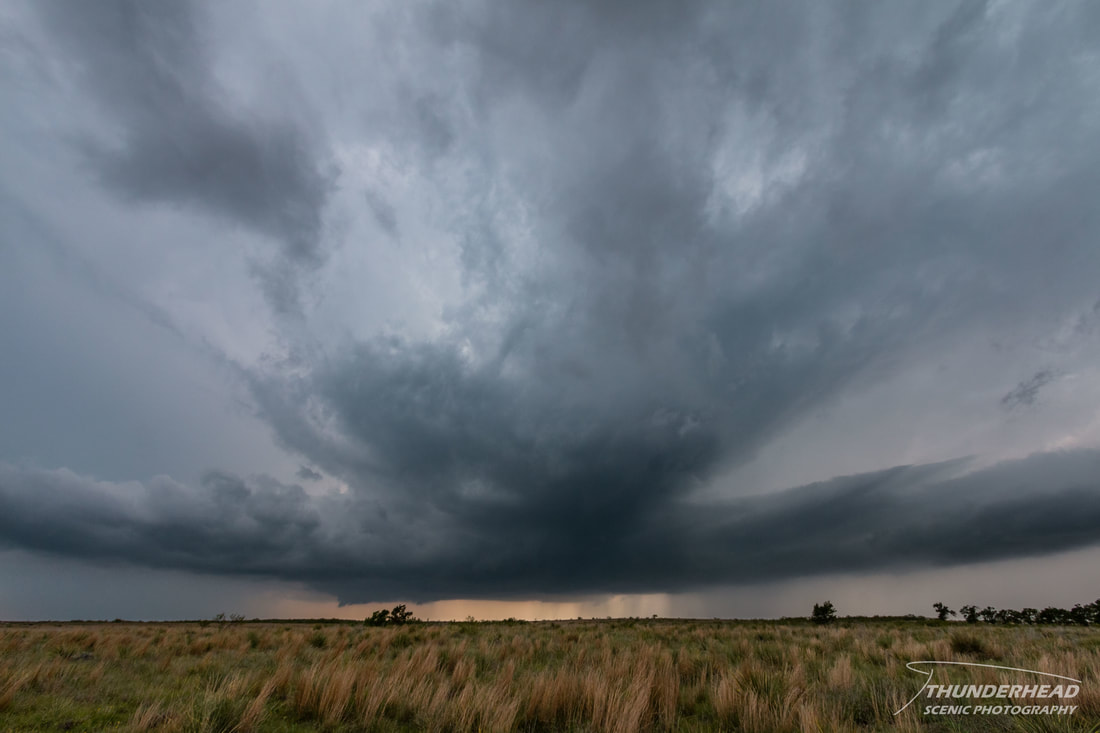 We bailed on the northern storm and headed to the southern one, which was now tornado-warned as well. It too had excellent rotation, but failed to produce a tornado at our position: 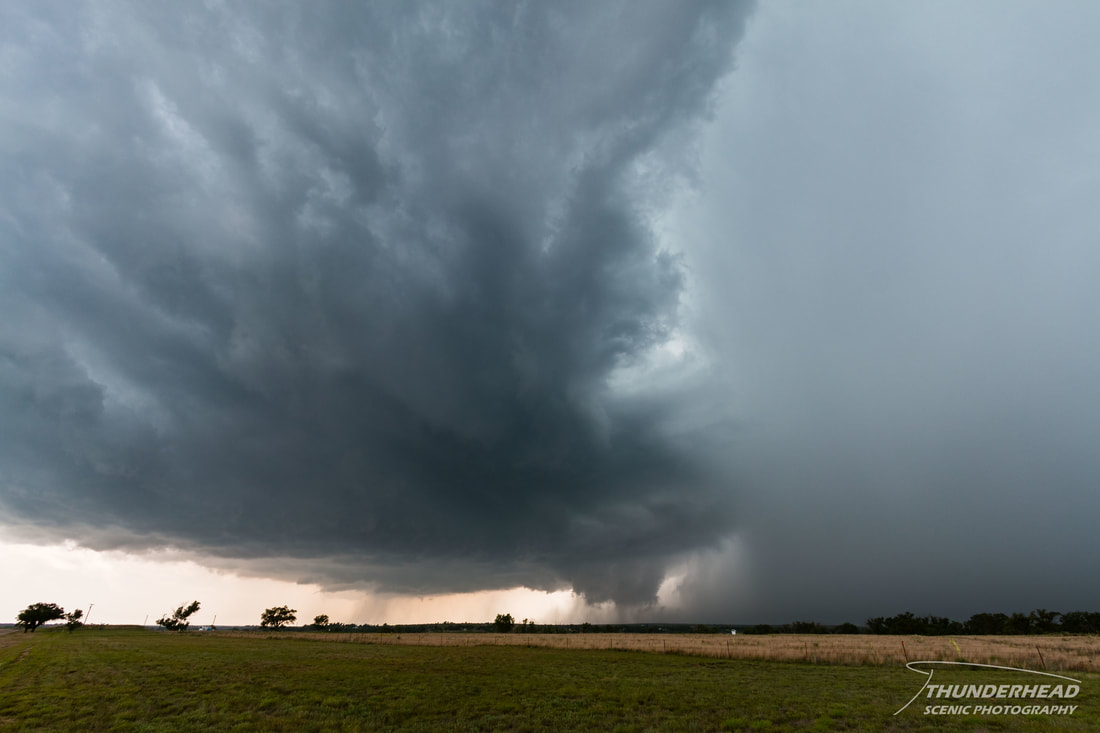 In order to keep up with it on decent roads, we had to drive away from it before we could start driving toward it. As we approached it from the south on Highway 273, it produced a funnel for what seemed like an eternity before finally touching down and becoming a tornado. It was a very pretty tornado, but we had a hard time finding a spot to pull off at due to the rough terrain, winding road, and chaser hordes. Fortunately, we found a spot and were able to grab some quick photos before it disappeared into the rain: 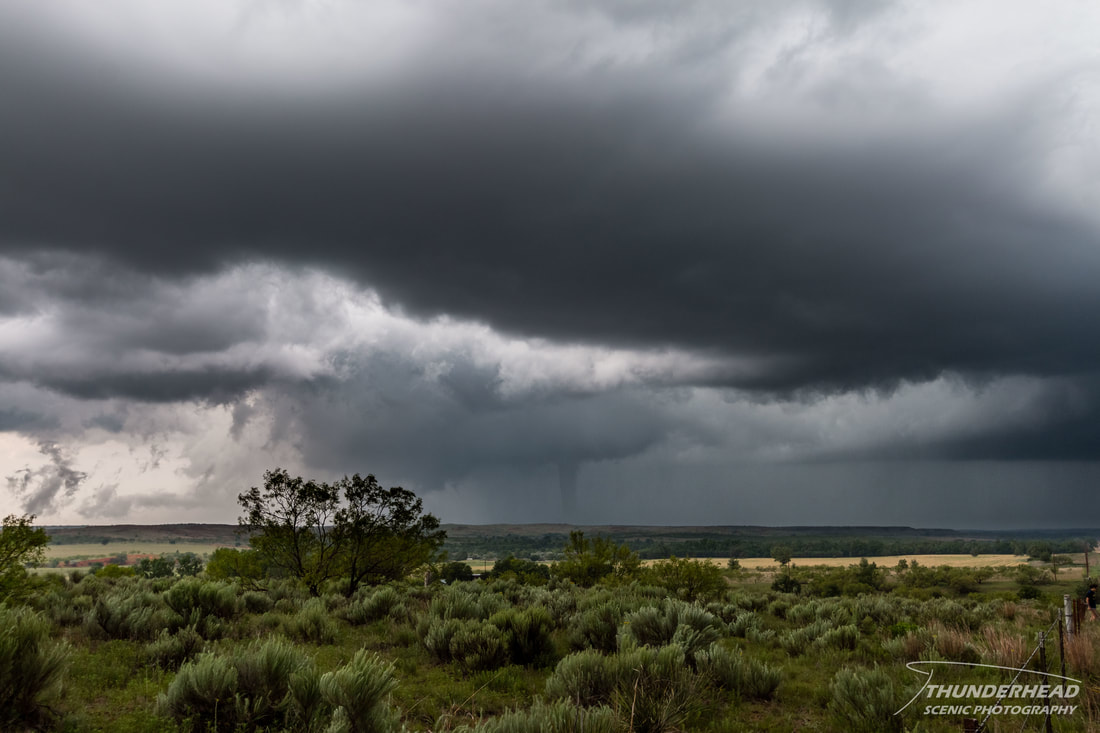 Continuing north on Highway 273 was slow, as this was the one good north-south road in the area and kept up well with the storm, so it was inundated with chasers. As we got closer to McLean, TX, to tornado became visible again as it began to rope out: 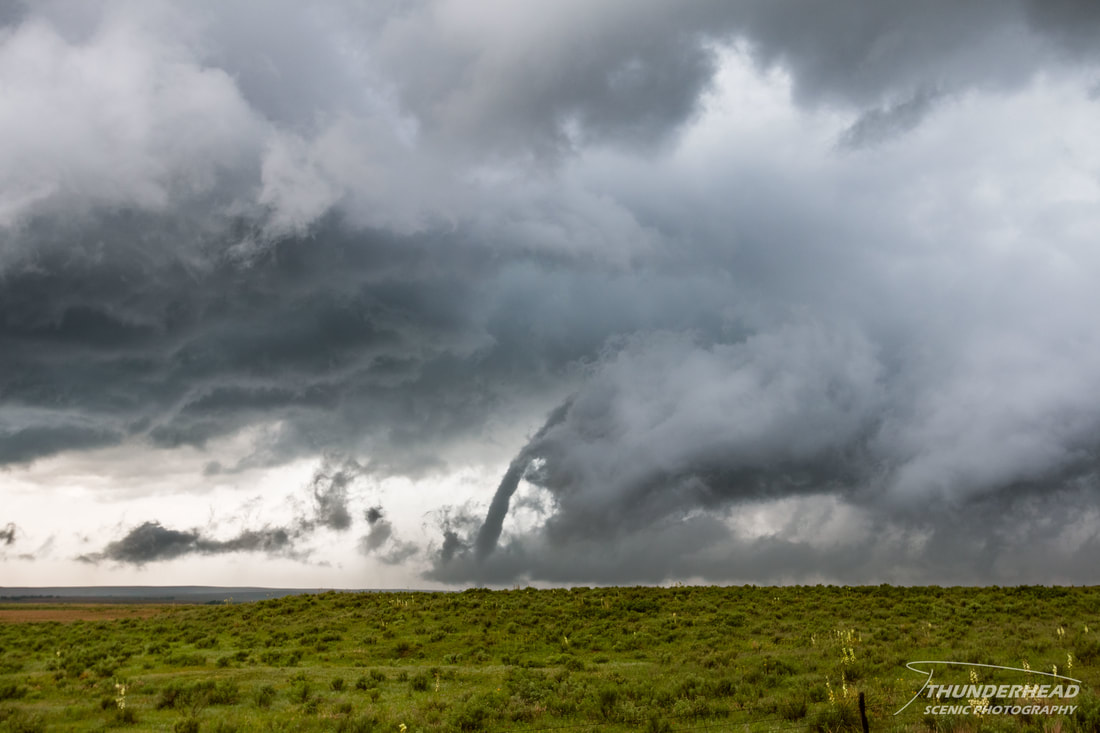 This tornado was rated EF0 and fortunately did not cause any injuries or fatalities. In the meantime, another supercell had developed to the south and was beginning to slightly interfere with the storm we were on. That, combined with the fact that our storm seemed to have several areas of rotation right over I-44, prompted us to jet east to get out of the way of everything. The southern storm looked as if it would muck things up for the northern storm, so we decided to now chase the southern storm. We traveled east into Oklahoma before diving south on Highway 30 to steer clear of the potentially large hail it was producing. Once getting clear of the forward flank, some very beautiful structure came into view. We sat and watched it for some time as it approached our position: 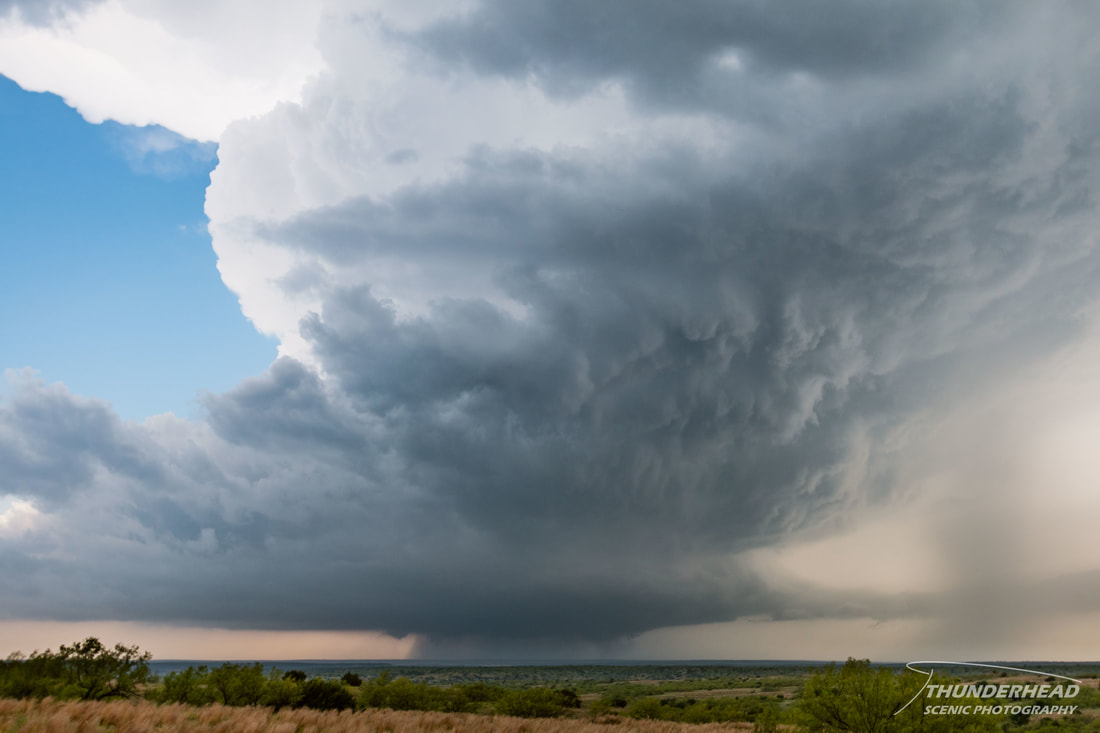 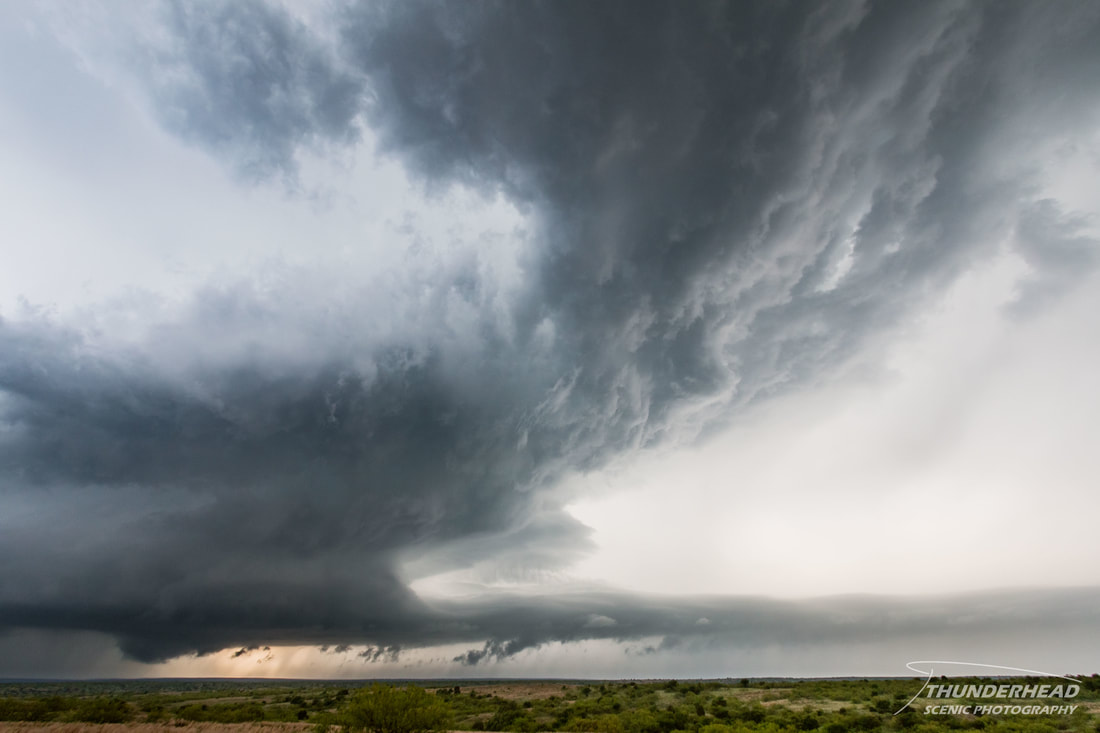 Once this storm got too close, we went further south and then east to stay with it. We approached it from the south around the time it produced a tornado that struck Elk City, OK. At our location, we were within a mile or two of the circulation, but the tornado was completely rain-wrapped, making viewing it impossible. This tornado was rated EF2 and unfortunately caused one fatality. We zigzagged northeast to keep up with the underside of the storm to see if it would cycle and produce another tornado, but gave up on that and quickly moved east to get out ahead of it to see the storm’s structure: 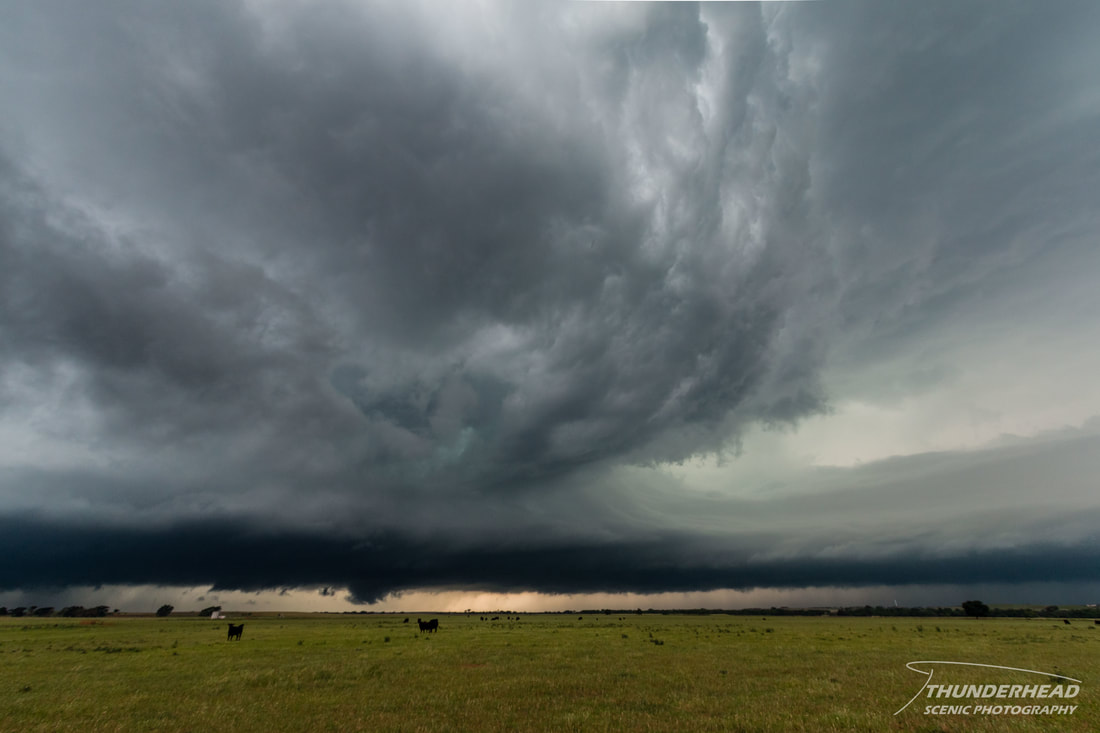 Following this storm for a bit longer after the above picture, we gave up on it, as it lost all visual appeal and didn’t appear healthy on radar. At this point, the sun was setting, and there was another storm to the south between Weatherford and Carnegie, OK that was producing quite the lightning display, so we sat and watched that for a while (photos below) before calling it a night and heading back to Oklahoma City for the night.
​Check out a time lapse of several of the supercells at various points from this day's chase below!
​The Storm Prediction Center's summary for this event can be found HERE, and the Amarillo, TX NWS' summary can be found HERE. ​​

Shortly after our chase on the 16th, I began forecasting for this day. The western trough was beginning to push into the Plains, with a couple embedded short-waves helping to kick up convection along the dryline from southern Kansas into northern Texas. I had to do a double-take, as the threat for supercells and possibly tornadoes looked to be at about the same level and in the same place as on the 16th, with an additional threat along the warm front in central Kansas. I felt that western Oklahoma was good enough of a play, but other sources pointed toward Kansas, so that’s where we planned to go.

​Michelle and I teamed up with Marcus again to head out to our target of the Ashland/Protection, KS area. Upon reaching our general target area, we waited for storms to fire further north along the dryline, as there had already been several storms that had formed further south along the Texas-Oklahoma border and western Oklahoma. Some of these produced a couple of quick-hitting tornadoes, but we held our ground and stayed put. A small blip on the radar went up north of Pratt, KS and moved north toward the warm front. Assuming this blip would go crazy upon reaching the warm front, Marcus wanted to check it out, so we agreed to go after it. Additionally, the convection to our south in Oklahoma was congealing into a giant mess and moving north at us, so we wanted to steer clear of that. Upon reaching Pratt, we had a couple options to decide between. The blip did end up hitting the warm front to the north and went supercellular, then tornado-warned, along with a couple other storms; however, these storms were still about an hour away. Another storm was beginning to isolate itself from the previously mentioned mess near the closer target of Greensburg, KS, and it looked like it could have some tornado potential. Our decision was helped by the latter storm becoming tornado-warned as it approached Greensburg. As we approached this storm, it weakened and lacked any visual appeal, fortunately for the town of Greensburg. More storms were firing along the dryline just to our west and south of Dodge City, KS, so we went after those. Several of them had decent rotation on radar, but they too suffered the same fate as the Greensburg storm.

​As the day looked to be a bust and that there was very little, if any, potential for severe weather where we had targeted, we called the chase and headed back to Oklahoma City. Unfortunately, we barely missed a stunning display of mammatus over Oklahoma City during sunset, as well as some crazy lightning shortly after sunset on the east side of the city. While I am disappointed that I didn’t get my camera out at all this day, it’s nice knowing that the residents of Kansas and Oklahoma stayed relatively safe, compared to what could have happened. It would seem that the parameters weren’t as great as forecasted, paired with a weak cap, which allowed for too many updrafts to fire at once, polluting the environment.