The greater severe threat on March 9 was across the South and the Ohio Valley where greater instability existed, but there was still a low chance of severe storms across Missouri and Illinois. Around early afternoon, a cluster of storms formed in central Missouri and moved due east, right at the St. Louis, MO metro area. As these cells drew closer, they congealed into a line and began to look threatening. While this line was not tornadic, it did have broad rotation and had a tornadic radar signature commonly seen with these types of storms:

Michelle and I decided to drive west to catch it as it approached the western metro to see if it had good structure. We met it in Chesterfield, MO just off I-64, and it appeared fairly lackluster as it had weakened since we had started our chase: 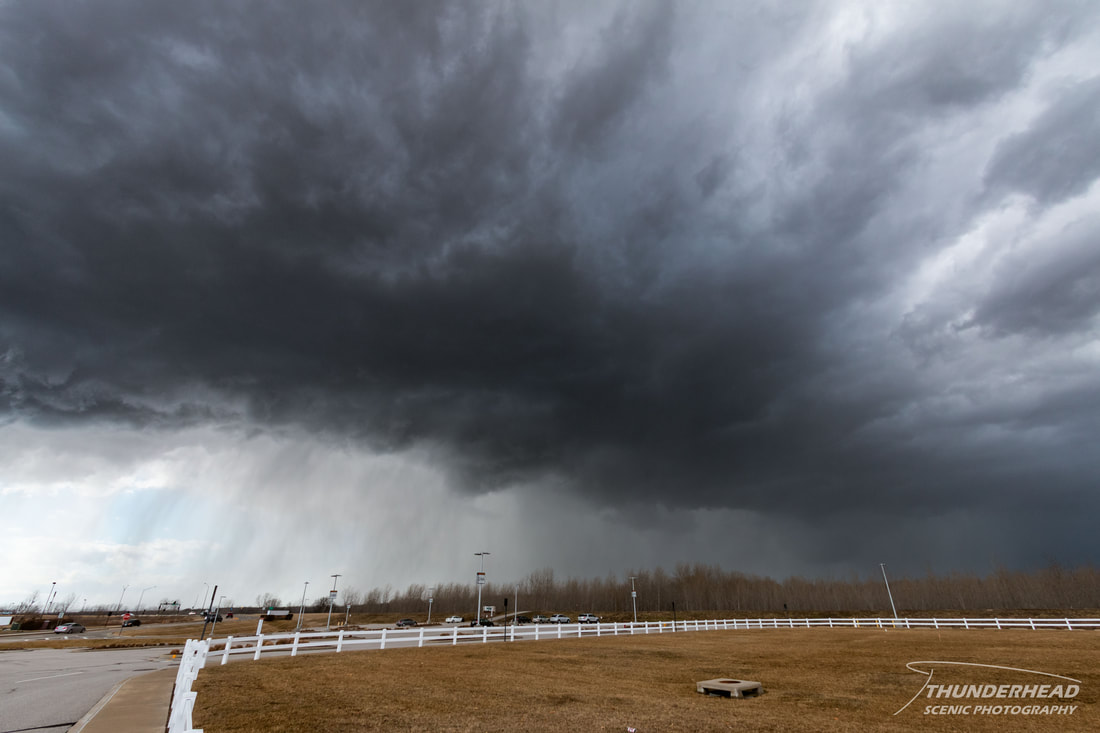 We stayed ahead of it as it entered the metro area, but our main radar app was having data issues. This made it difficult to judge the storm’s speed and motion, and it soon caught up to us, causing us to slow down as we drove through rain. This did have some benefit, as we were able to witness a very vibrant double rainbow on the backside of the storm. Since we were driving in the rain, getting a good image of the rainbow proved difficult.

We continued into Illinois were the southern portion of the storm began to rotate. The storm’s base came into view near Mount Olive, IL where strong low-level rotation and upward motion could be seen just to the east of the town. We continued to follow the storm behind its RFD gust front, allowing us a clear view of the updraft and hail that was falling: 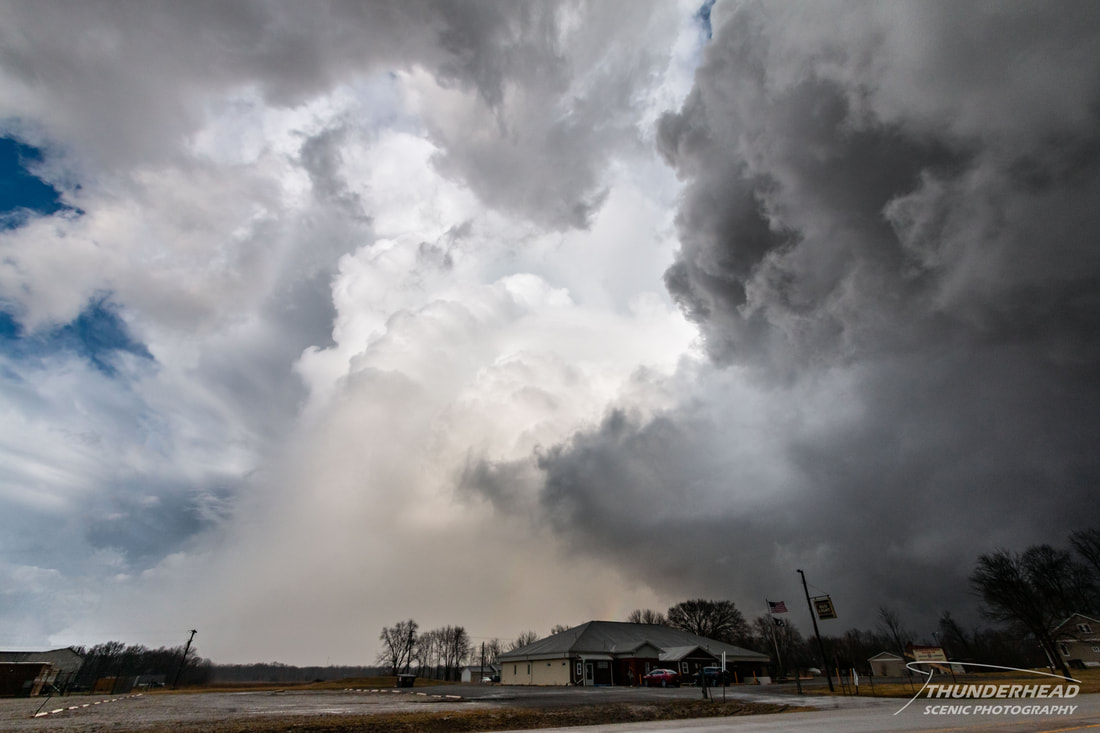 The location of the best rotation is located approximately just left of the center of the two images below:
d
I personally liked the way the contrast of the storm's inflow band mixed with the different shades of blue of the sky: 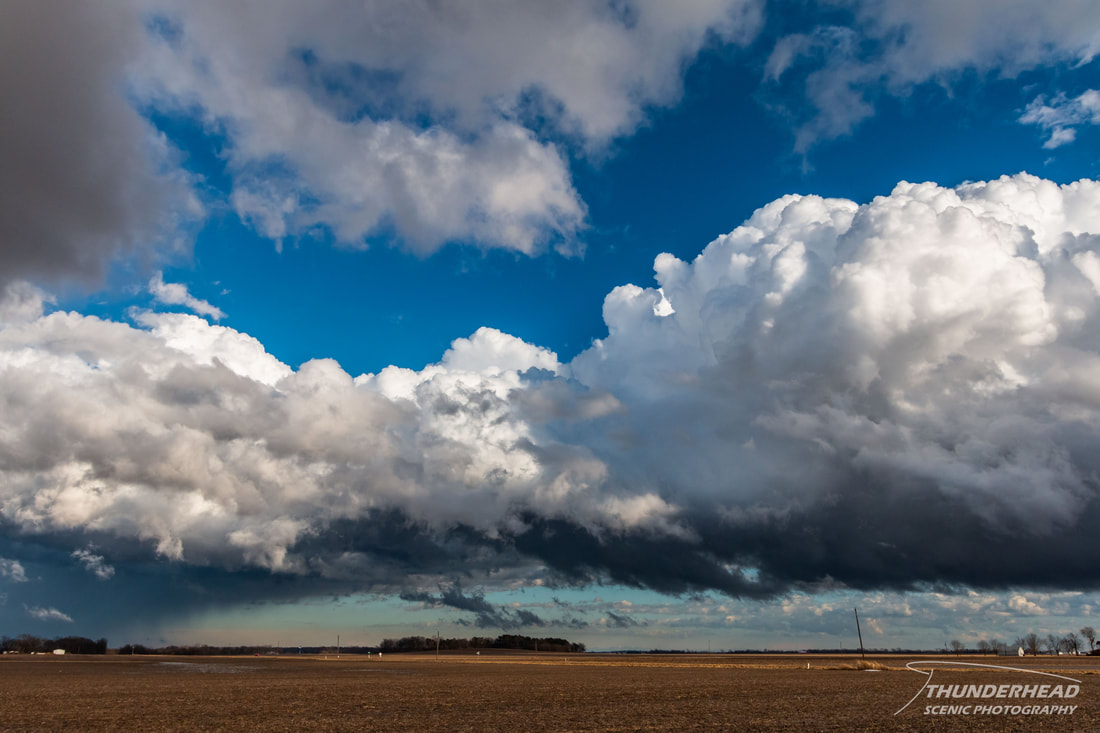 We followed this storm to near Herrick, IL where it began to weaken substantially. New storms began firing along the original storm’s outflow boundary (first image below) and in the immediate area ahead of the approaching cold front. As these developing storms mixed with the evening light, they created some dynamic scenes: 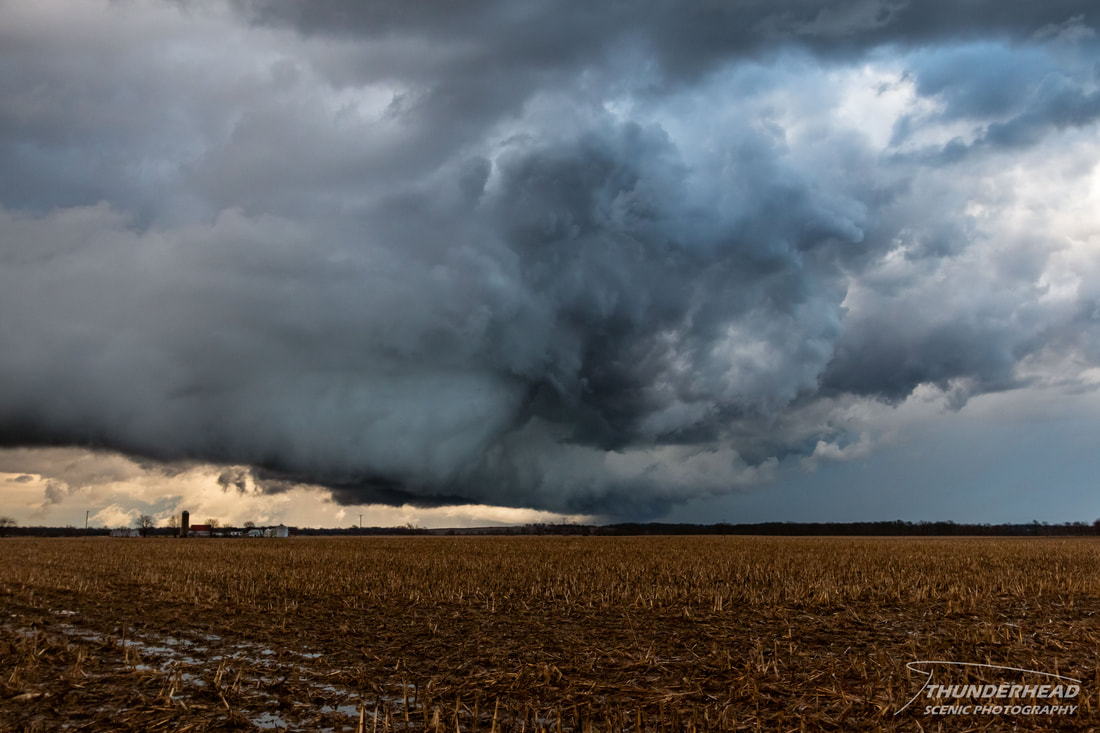 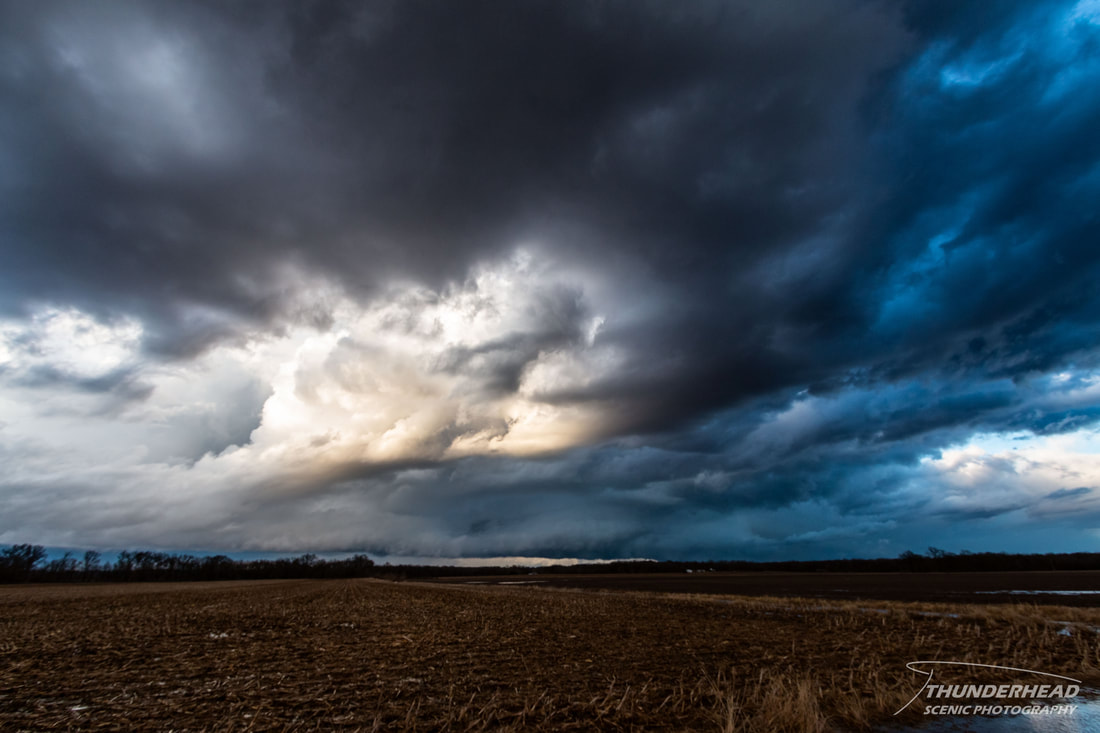 A sign that spring is just around the corner was the numerous flocks of geese we witnessed flying northward: 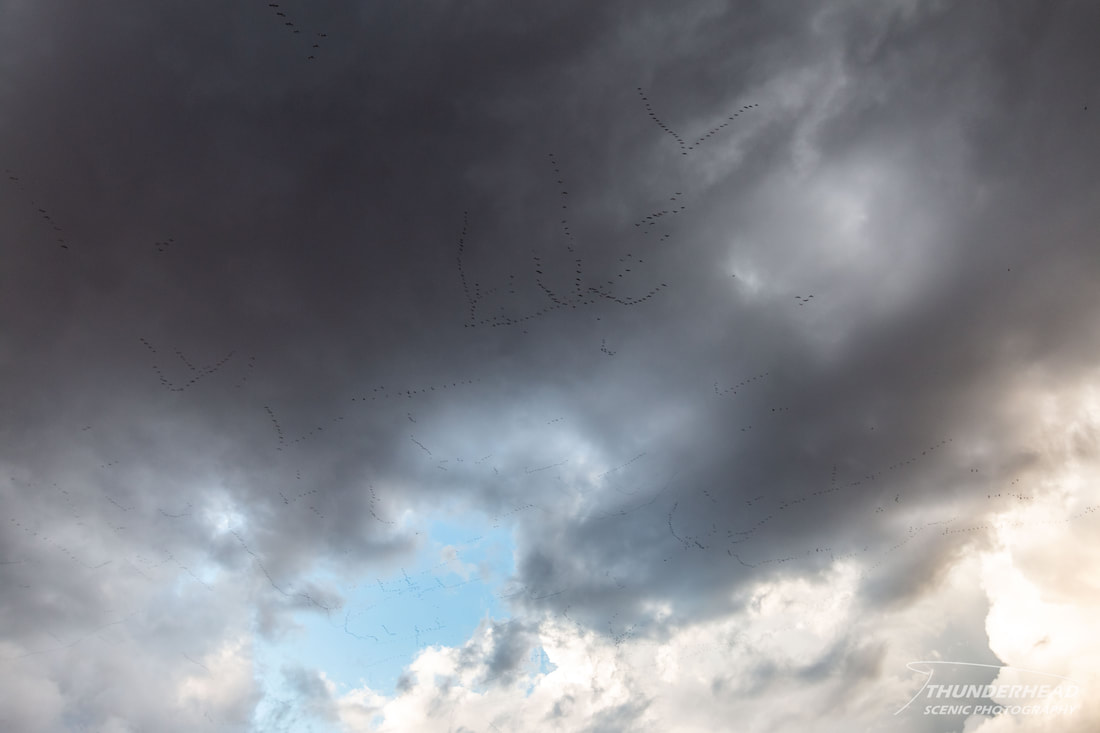 We briefly followed one of the new storms as it mixed with the light of the setting sun (images below). However, flooded roads and the landscape made keeping up with the storm nearly impossible. Additionally, the cold front began catching up and undercutting the storms, effectively ending our chase. This was a pretty low-chance day, but it was nice to see some storms after the long, hard winter and to shake off the dust. 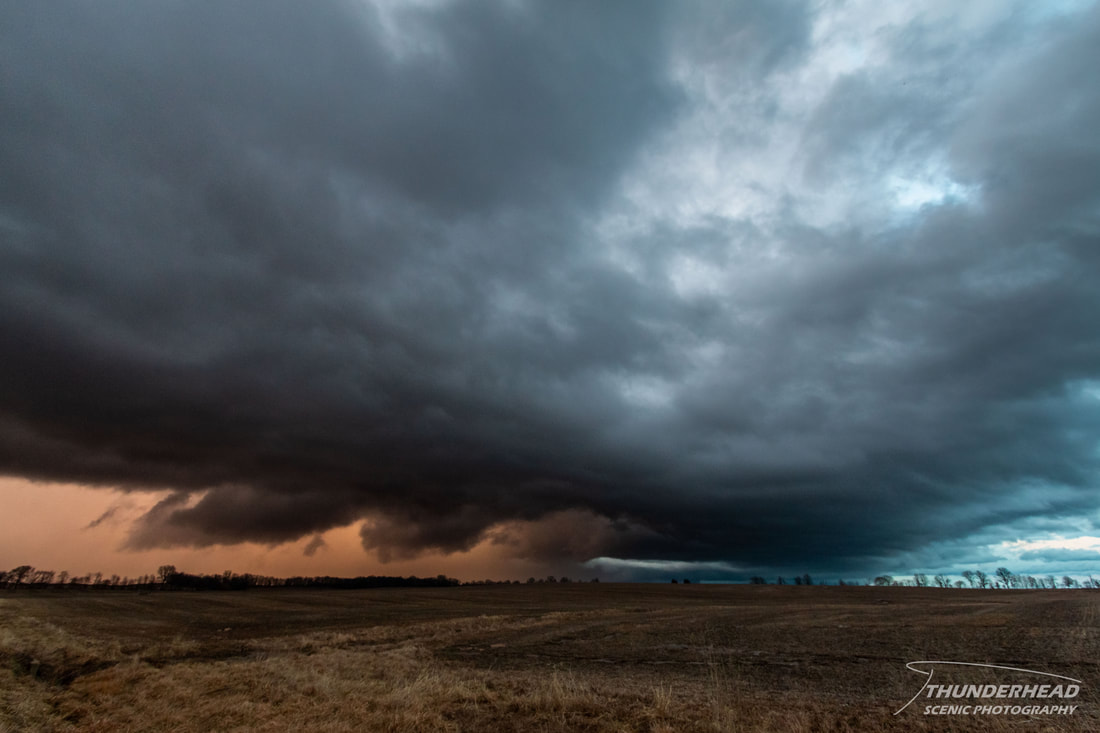