We had been in an active stretch of severe weather. Even though I hadn’t been able to participate in it much, it was nice to see (as long as it doesn’t kill or hurt anyone). A cut-off low had been sitting over the southern U.S. was finally moving on, opening the door for the first low to track across the Midwest for the spring. Fortunately, I was on spring break and would be back home in the St. Louis, MO area, so this event was in play for me. Hail and large hail chances were very high, and there was a decent tornado threat possible if surface dew points could climb high enough. I originally was going to go solo, but Michelle changed some plans at the last minute and could go with me in her car. This worked out well because I didn’t have my car with me, so I was going to have to take the family mini-van, which was less than ideal. We left around 1pm, heading to our target area of Quincy, IL. Even though storms were set to fire in eastern Missouri and western Iowa, we didn’t want to cross the Mississippi River for fear of getting stuck without a bridge crossing. We made it to Quincy around 4-4:30pm, just as reflectivity began showing up on radar to the west. After a quick stop at a gas station, we saw on radar that there was a dominant, sub-severe storm in Missouri tracking into Iowa that was too far north for us to reasonably catch. A cluster of even weaker storms was trying to get their act together just north of Quincy moving into Illinois, so we decided to dance with those, heading east on Highway 104. Out of the three storms in this cluster, the northern two merged to become a larger, more dominant one. The storm to the south looked terrible, was blocking our view of the northern storm, and was refusing to die. Given that this was the only play, we decided to keep up with it, while keeping our eye on a storm trying to pull together to our southwest: 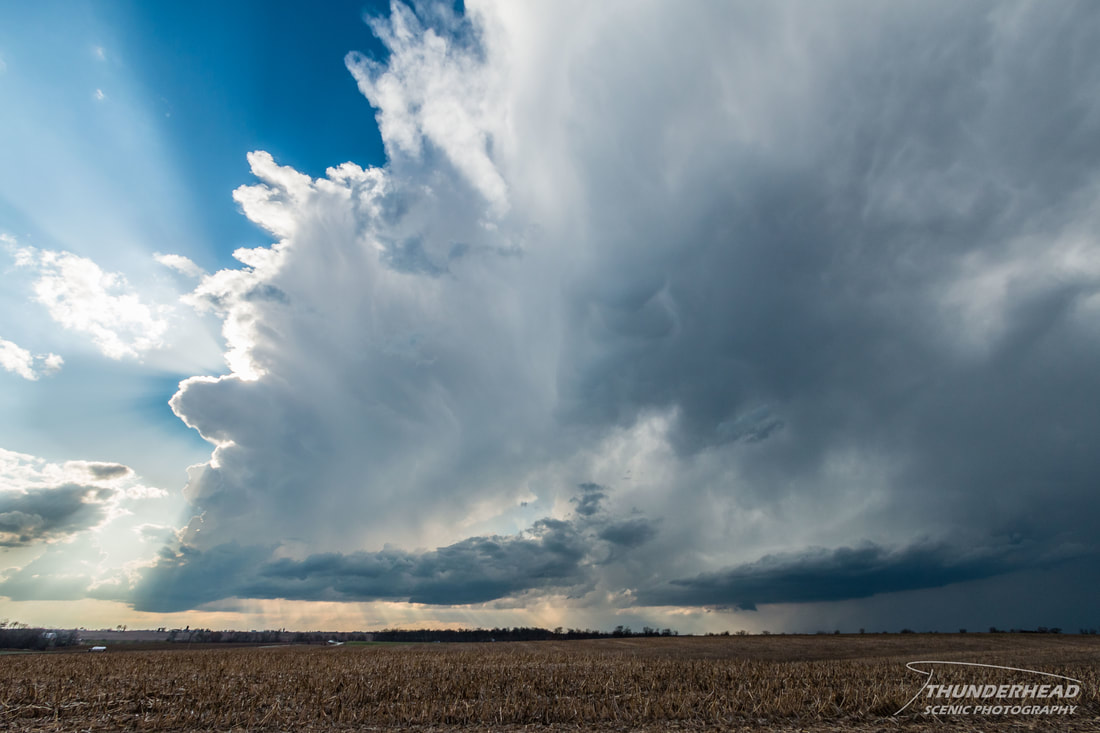 The base to the right in the above picture was the pesky storm to our north that was blocking our view of the better storm. ​That storm on the left (southwest) never could get going, and fortunately, the crappy storm just to our north died off. This give us a good view of the storm behind it, which was now near the Loraine, IL area and displaying some decent structure: 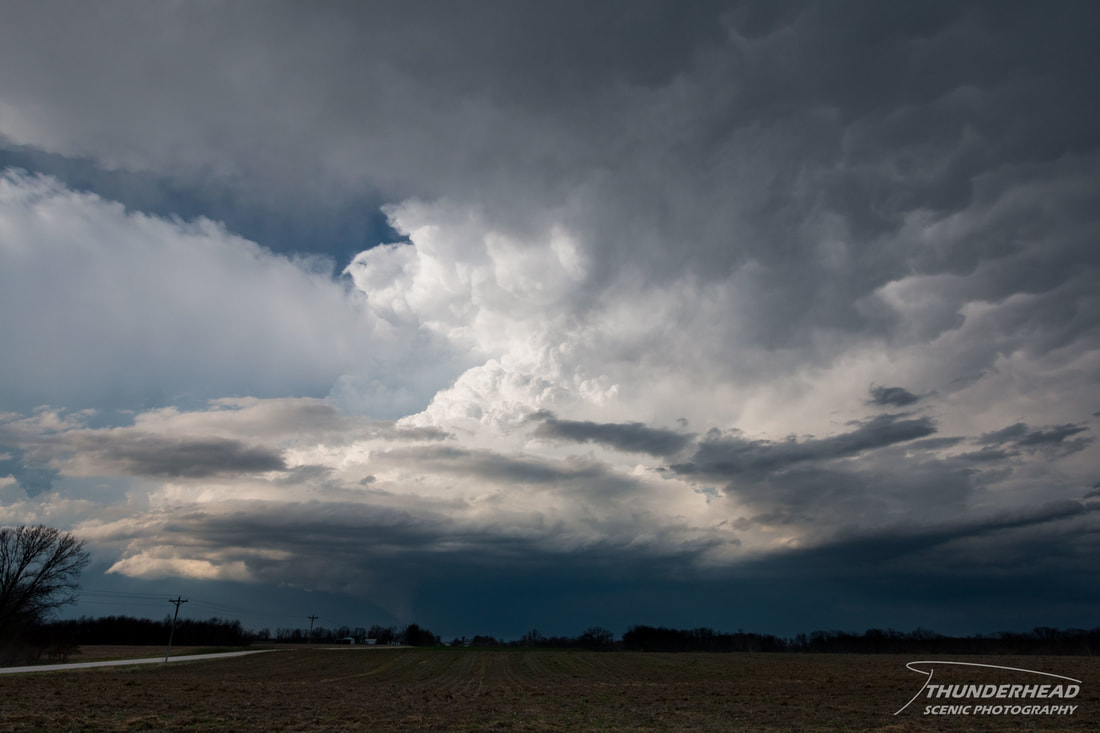 It was now severe-warned, but there was something more interesting thrown into the mix: the storm I first mentioned in Missouri took a right turn and began to travel more easterly rather than northeasterly, was tornado-warned, and was coming up behind the one we were on. To make things even better (note the sarcasm here), around this time, we lost data. It was not as if we had just 4G vs. 4G-LTE, or even that stupid, useless “E”; no, we had NO data whatsoever and just the last radar scan before it cut out. This is where some smarts and a good knowledge of the atmosphere comes in handy, as well as a visual of what you’re chasing. We kept on the storm we were on, just staying to the south and zigzagging our way northeast toward Macomb, IL, praying that as we got closer to civilization, we’d get a signal again. We stopped to watch as the storm we were on became a little unorganized: 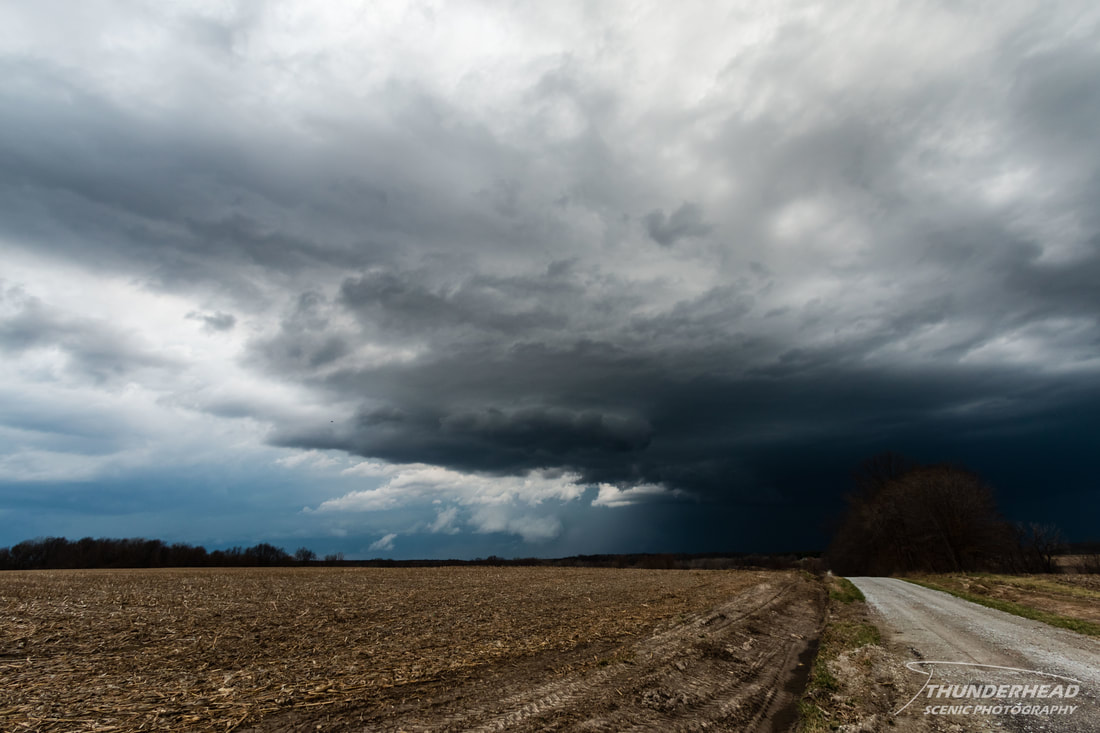 As we were following this storm, we noticed another base off to the northwest. Was this the tornado-warned storm from earlier? We stopped just south of intersection of Highways 61 and 136 to watch this thing. It was a messy beast: 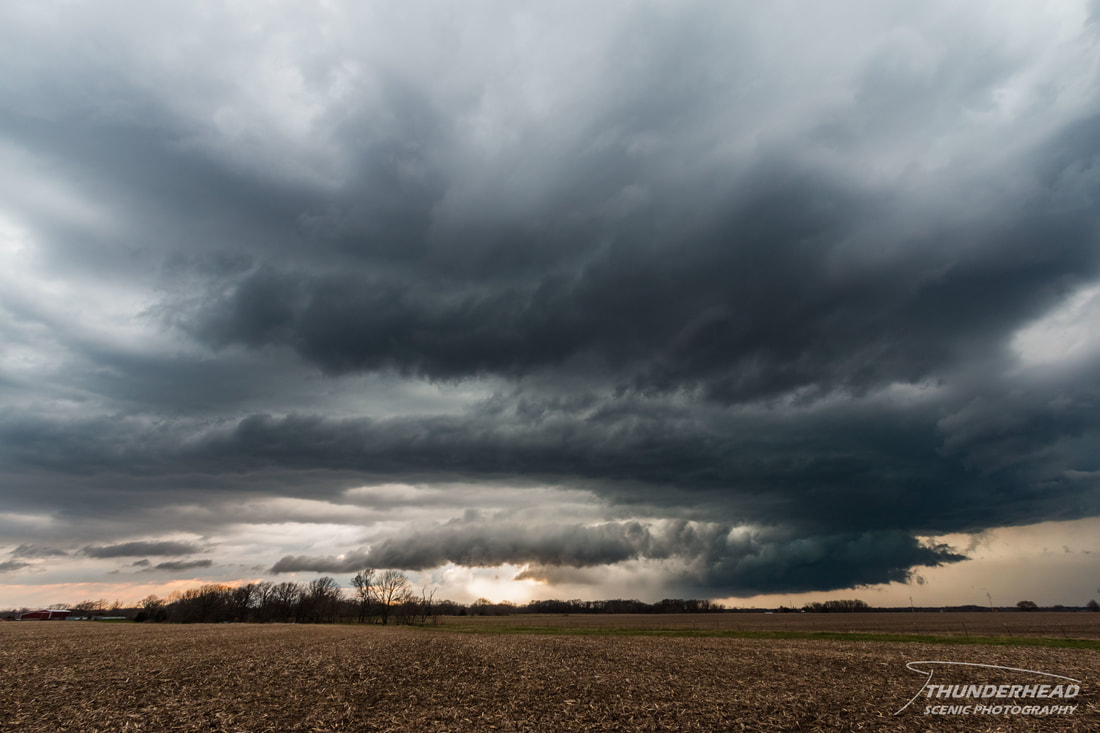 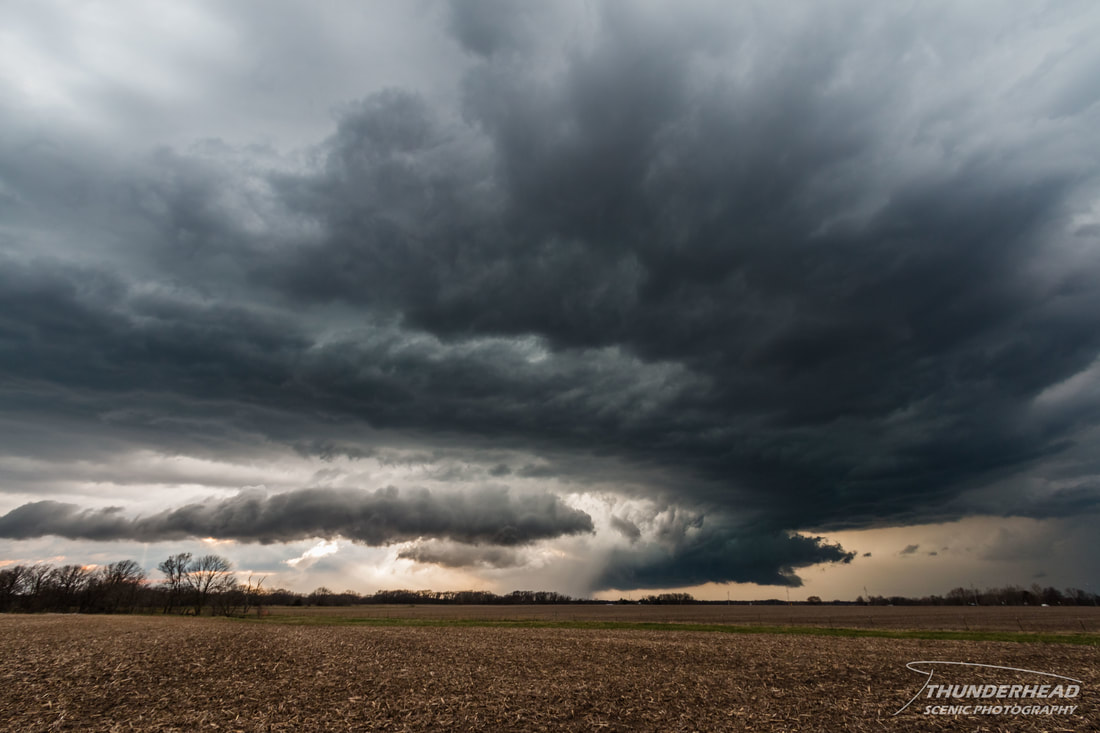 We kept heading toward Macomb, where we regained data, only to see a jumble of merging and morphing, tornado-warned supercells just to our north on radar. There was a beautiful storm that produced a tornado to the north in Good Hope, IL, but I’m not sure if that was the storm immediately to our north or two to our north. Again, it was messy and I was too busy navigating Michelle through Macomb to get the exact details. We got out of Macomb and could view the storms to the north. There wasn’t much to see--not a tornado anyway--but the storms had decent structure. We decided to not chase those, but rather to dip to the south to get out of the way of a sub-severe storm coming up from the southwest. This storm showed some cool colors and contrast as it was lit up by the setting sun: 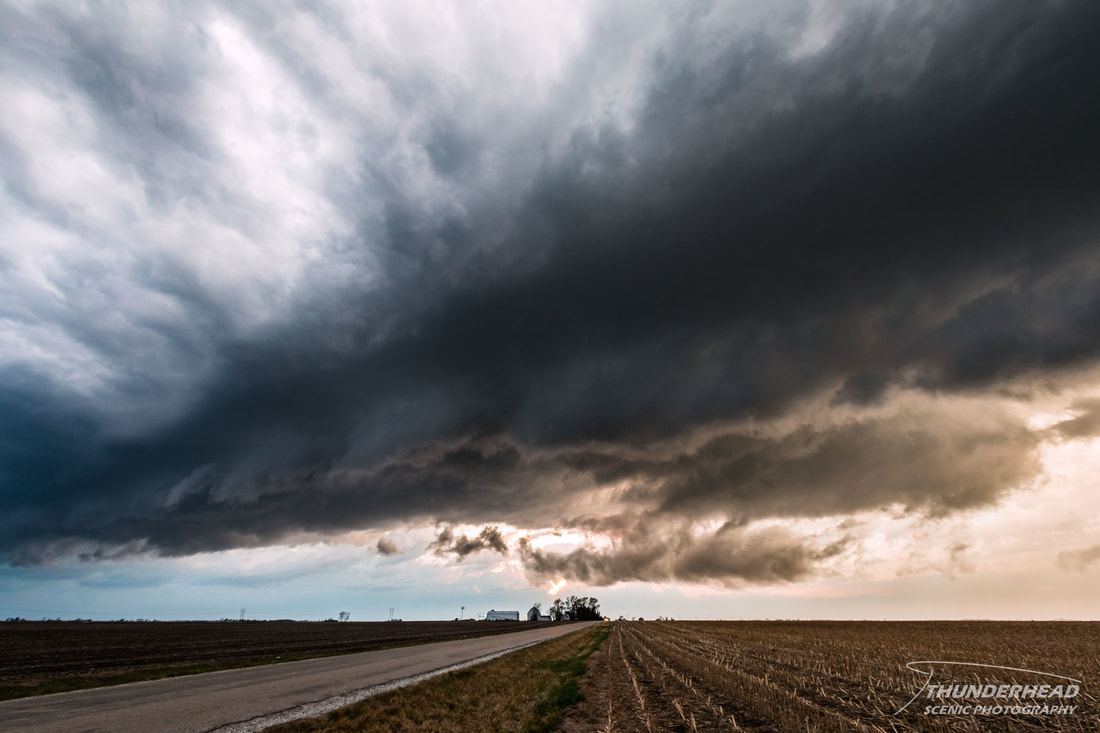 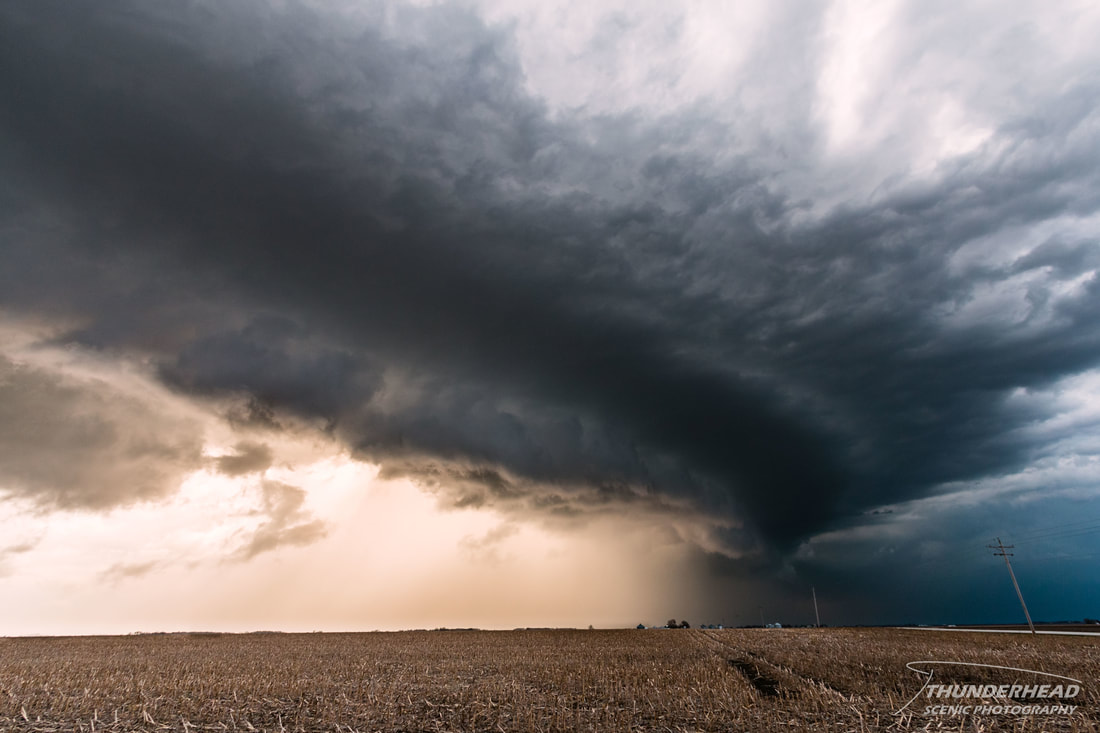 This storm ended up merging with the storms to the north, which really had become just one giant storm and was still tornado-warned. We tried to stay behind them, as they had some cool features lit by the setting sun and were putting out a good bit of lightning. We stayed, or rather, attempted to stay up with them to just south of Prairie City, IL, where we stopped to try to get some lightning shots. That didn’t go too well, as there were mainly just intra-cloud flashes and and only a few visible bolts, in addition to the wind blowing at least 40 mph, making it difficult to keep my tripod perfectly steady. We called the chase and headed back home.​
​
Make sure to check out the timelapse from this day below!
​
​The Storm Prediction Center's summary for this event can be found HERE.