This event snuck up on me, which seemed to be the trend with me in 2015, as this summer had been crazy busy because I was preparing for Michelle and my wedding. The setup for this day was to occur in a northwest flow pattern. Parameters were supposed to be prime for supercells and tornadoes come mid-afternoon and into the evening through Missouri, including the St. Louis, MO area. A tornado watch was issued mid-afternoon, as the Storm Prediction Center was confident in a couple of these storms producing tornadoes. Between 5 and 6pm, an arcing line of 4-5 supercells formed in northern and central Missouri and moved southeastward toward the St. Louis area. After an hour, there were only 3 dominant storms, one of which was heading right for St. Louis. I began seeing pictures on social media of its beautiful structure as it approached the northwestern St. Louis suburbs. This is where it produced an EF2 tornado near St. Peters, MO. The storm continued through St. Louis, cutting through the center of the city perfectly from the northwest to the southeast. This is where I come into play. I had been running errands south of St. Louis with Michelle as we prepared for the wedding. It was time for me to head home, so I tried to time it perfectly so that as the storm was coming out of southeastern St. Louis, I would meet it near where I-255 crosses the Mississippi River. I had to go that way anyway to get home, so why not? Upon nearing the Arnold, MO area, I could see that a broad base was present with wall cloud somewhere over the Webster Groves, MO area. The way it was moving, I figured I could get across the river and pull off of I-255 onto Highway 3 to get a good vantage point while staying just out of the storm’s way. This turned out to be true, as I found a spot that had a clear shot of the storm. It had distinct features, a broad meso, and the lightning was insane. I can’t say I’ve ever seen that many “big” bolts, as these things could be seen consistently coming down from the top of the storm and hitting just several miles away. Keep in mind that the shots below were taken at 10mm on a cropped sensor camera, which is very wide: 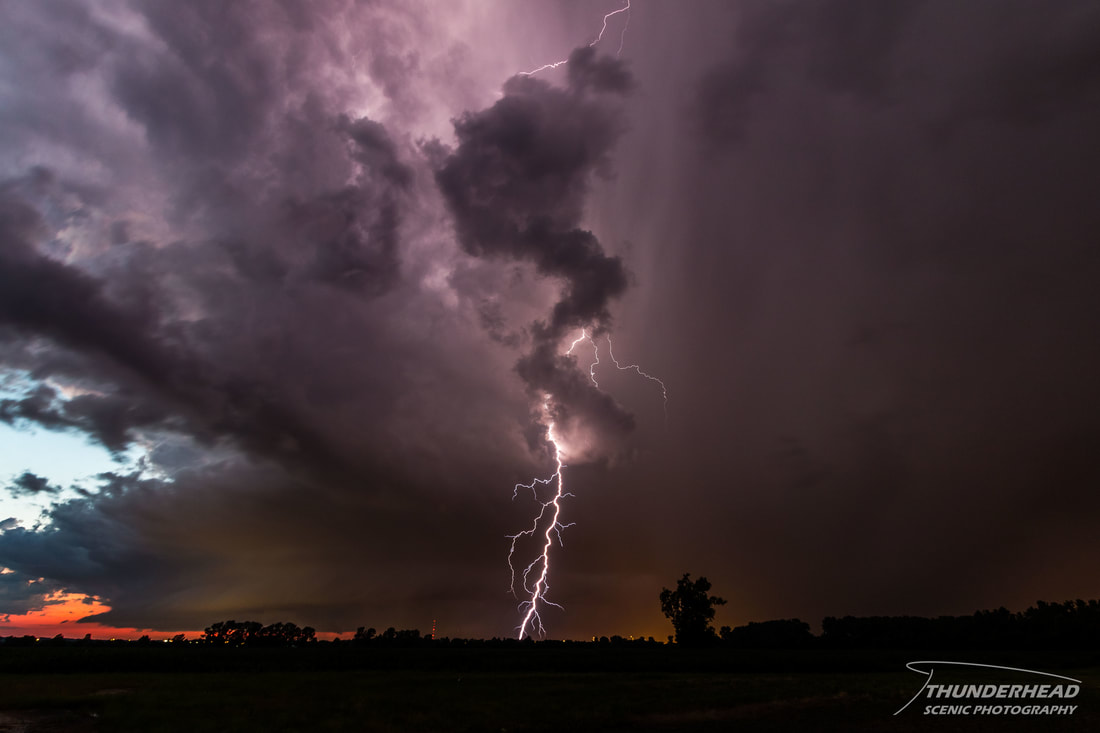 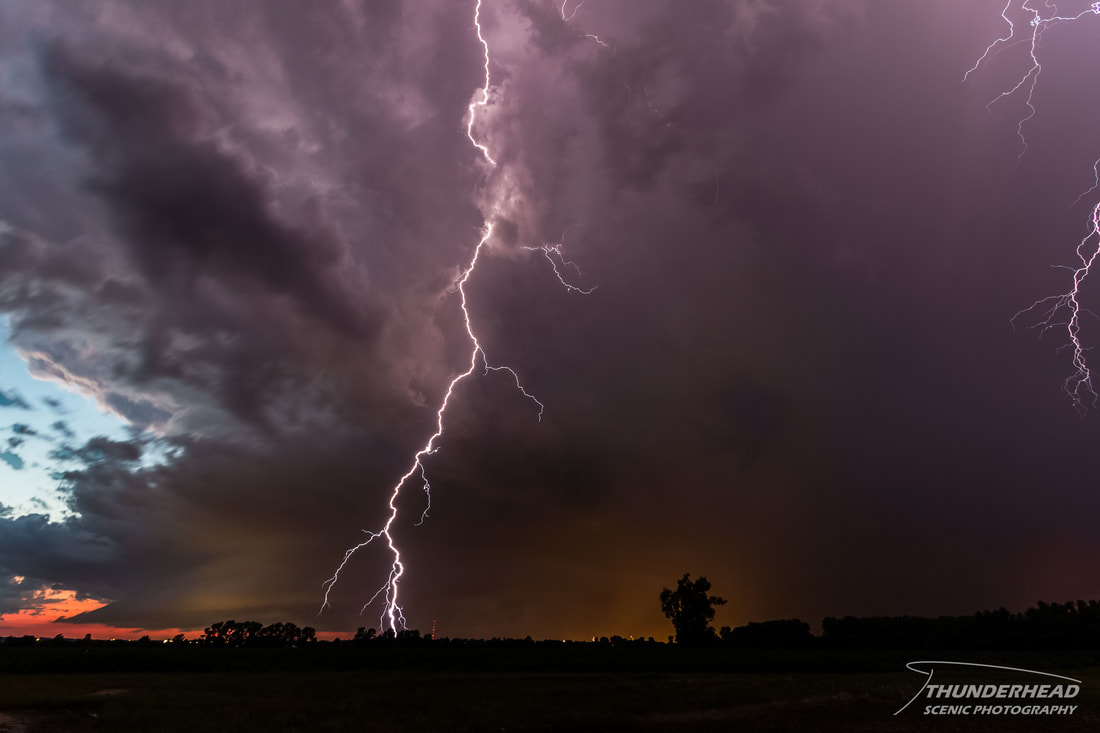 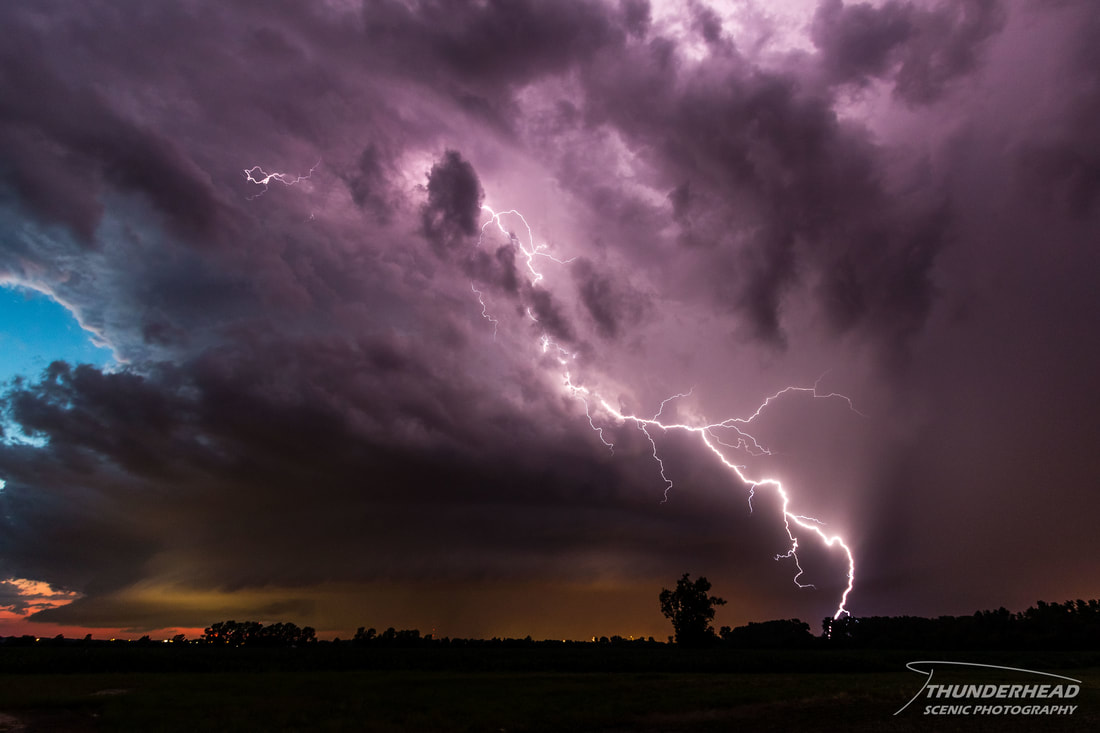 While sitting there, I noticed that the inflow from the south seemed to pick up. I was thinking that this would mean it would have better tornado potential, thankfully now that it was moving out of the highly populated St. Louis area. I hung out there for about 15-20 min and then saw on radar that the storm was taking a sharper southeastward turn than I anticipated. I decided to relocate further to the south to get out of the way and get to a better vantage point, as the storm had also gotten too close for even my 10mm lens to get most of it in: 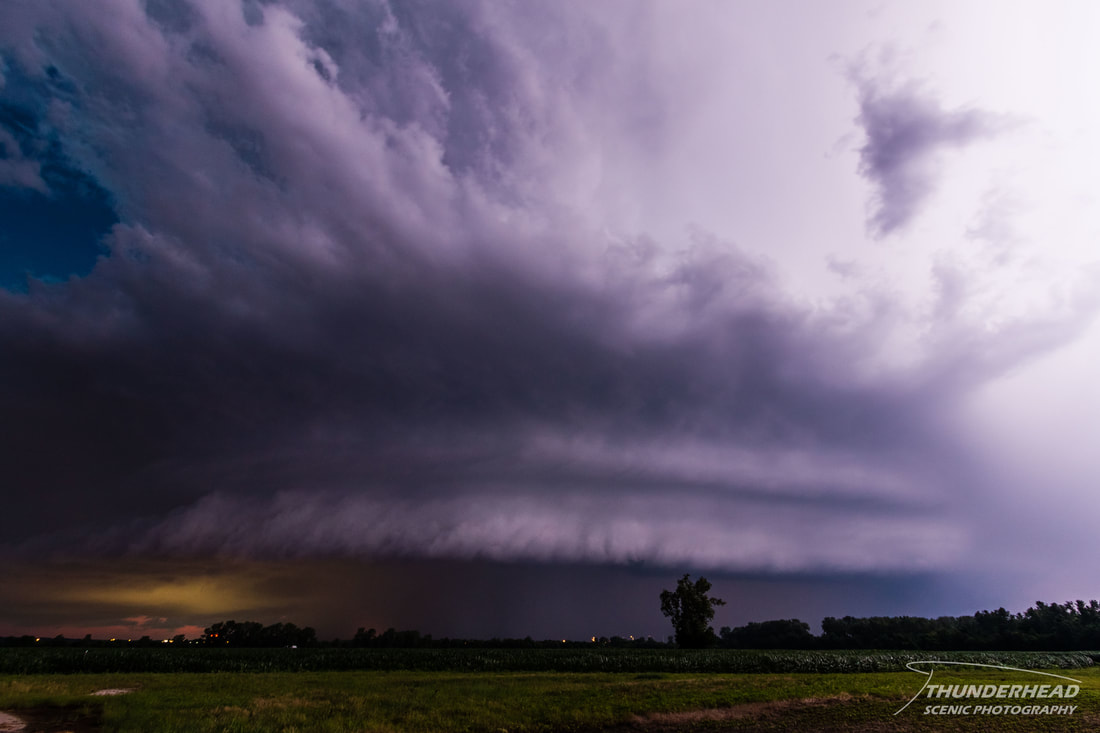 I pulled off again between Columbia and Waterloo, IL, and captured some of the best night time lightning and structure I’ve ever seen on a supercell (photos below).  The storm still had some good inflow here too. 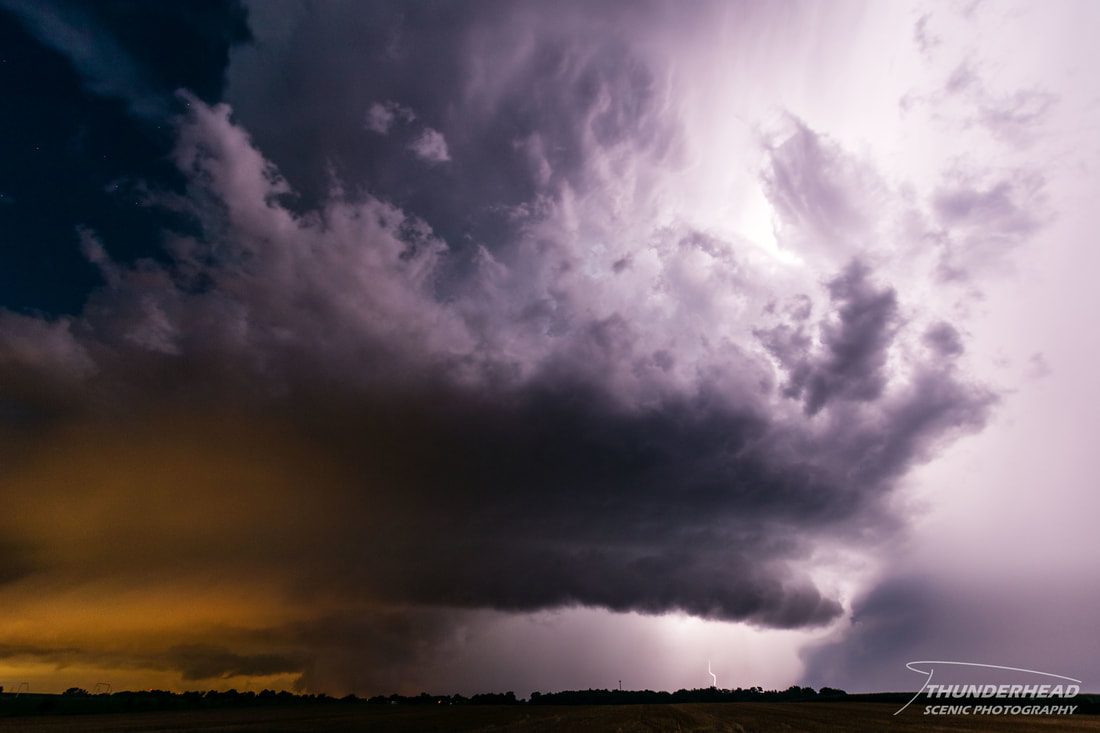 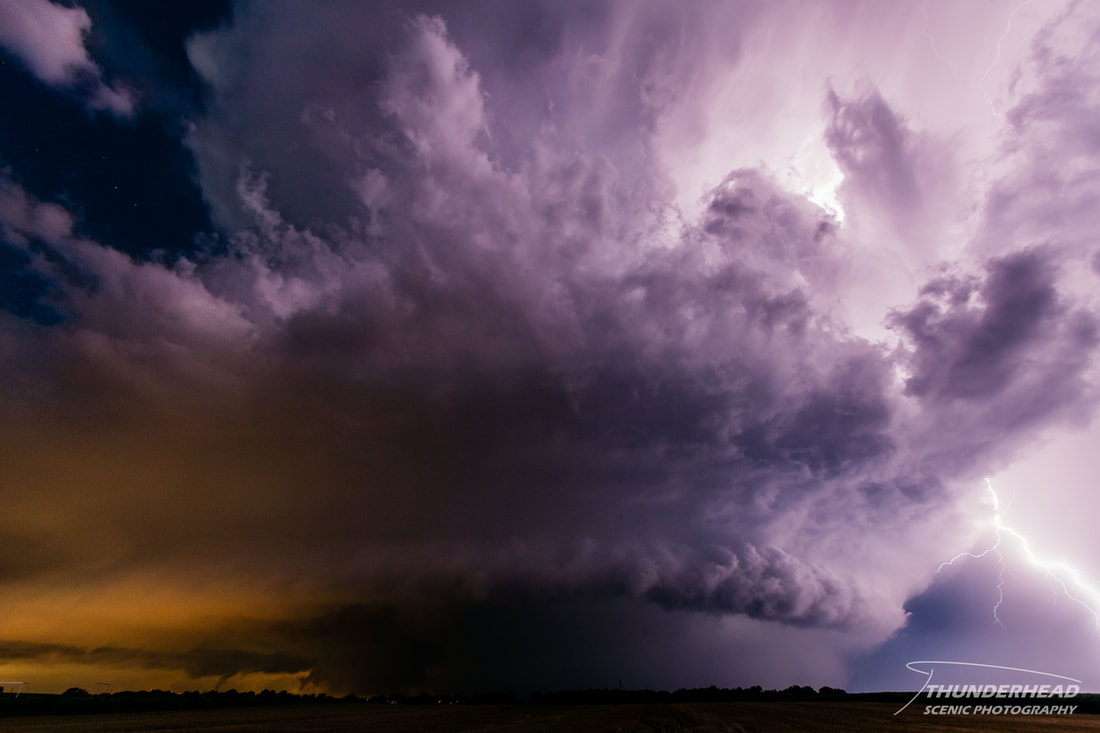 I moved further south again to just north of Waterloo to get in better positioning and watch as the storm weakened while still seeing some good bolts: 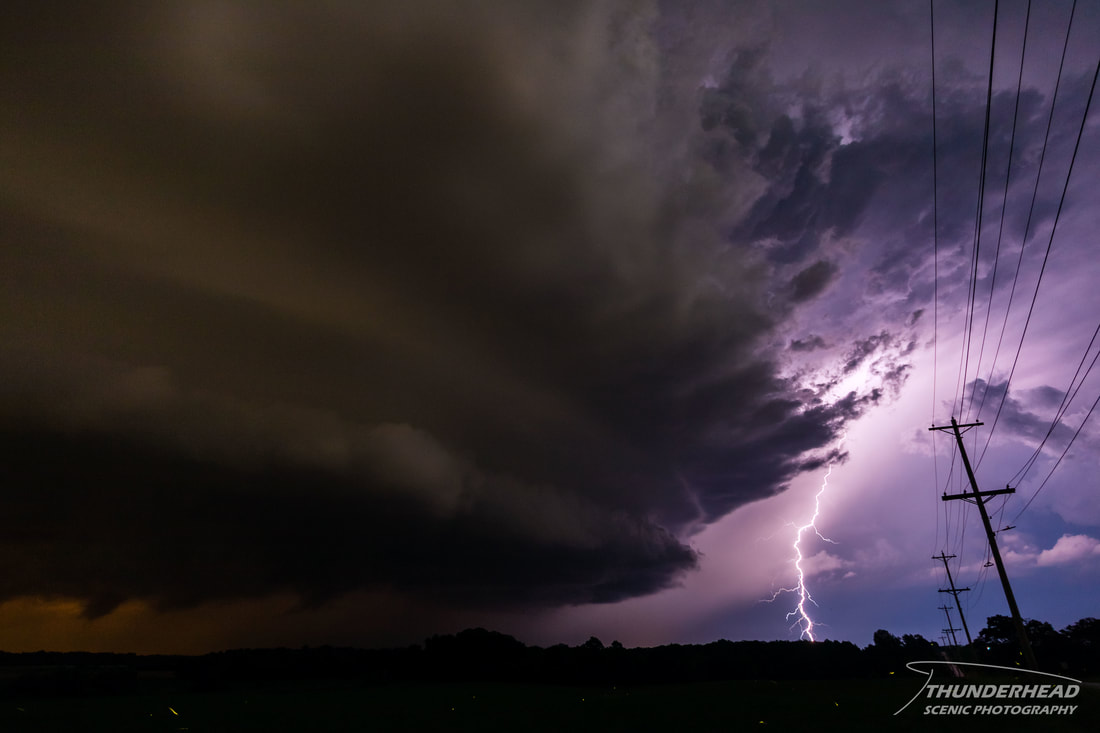 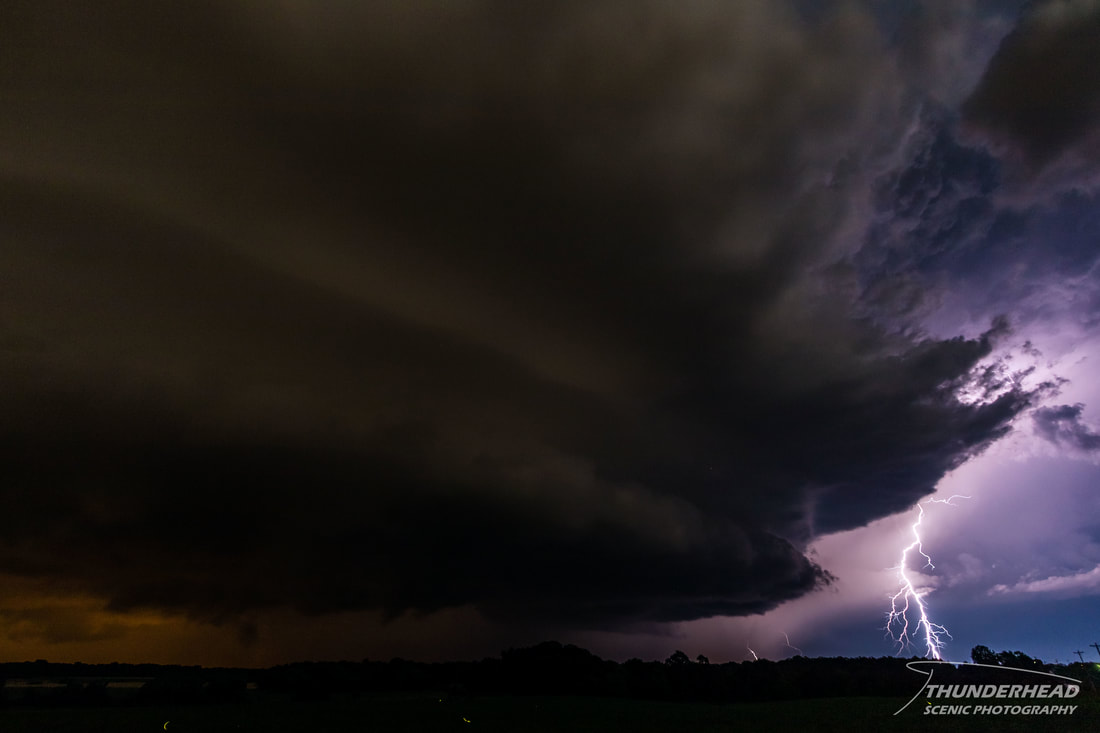 Over the course of about 10-15 minutes here, visible cloud-to-ground lightning strikes dropped off, and it appeared that the storm became outflow-dominant.  It was actually quite calm where I was, with little to no wind.  On radar, it still was severe-warned and had quite a hail core, but seeing that it had visually fallen apart and the lightning had died off considerably, I called the chase and made my way back home.