On January 22nd, I saw a week out that a deep trough was going to dig down across the lower Midwest, bringing the potential for severe weather to the region. I was reassured in my thinking when I checked SPC the next day and saw that they had issued a Day 7 Outlook, something I had never seen before in my young storm chasing career. The hot spot was going to be over Arkansas, which I was not happy about, due to the poor terrain and road network there. However, an opportunity is an opportunity. Michelle, myself, and a couple other fellow meteorology students left after our class got out around noon and caravanned south out of St. Louis, MO on I-55 to our target of Jonesboro, AR. Reaching Jonesboro, we waited as a squall line progressed eastward toward us. Several cells formed ahead of the line and became tornado-warned, but were not promising as they looked extremely linear and “squashed.” In addition to these tornado-warned cells, many other smaller, weaker storms and showers were popping up in the warm sector. Due to all the small updrafts that were occurring everywhere, any possible tornado that occurred would be hard to view without getting personal with it. That, combined with the fact that this event so far was lacking tornadoes, we determined we needed to cut our losses and get some good lightning shots. After deciding on where to go, we left moving northeastward toward Paragould, AR and then to I-55. We began to see lightning getting closer and decided to pull off ​after we had passed under one the little updrafts. Looking at the radar, the warm sector cells all went linear, forming one solid line. To make matters worse, there was embedded rotation that was tornado-warned and coming right for where we were located. The warning was soon dropped, but there were five more tornado warnings to our north and there was no way we would get up I-55 without running through them, so we decided to stay put for a while. We pulled over about 2 miles from I-55 because I was noticing faint structure along the front of the line. We watched some bolts and flashes light up the storm (only one good photo below), and let the line overtake us before heading home. 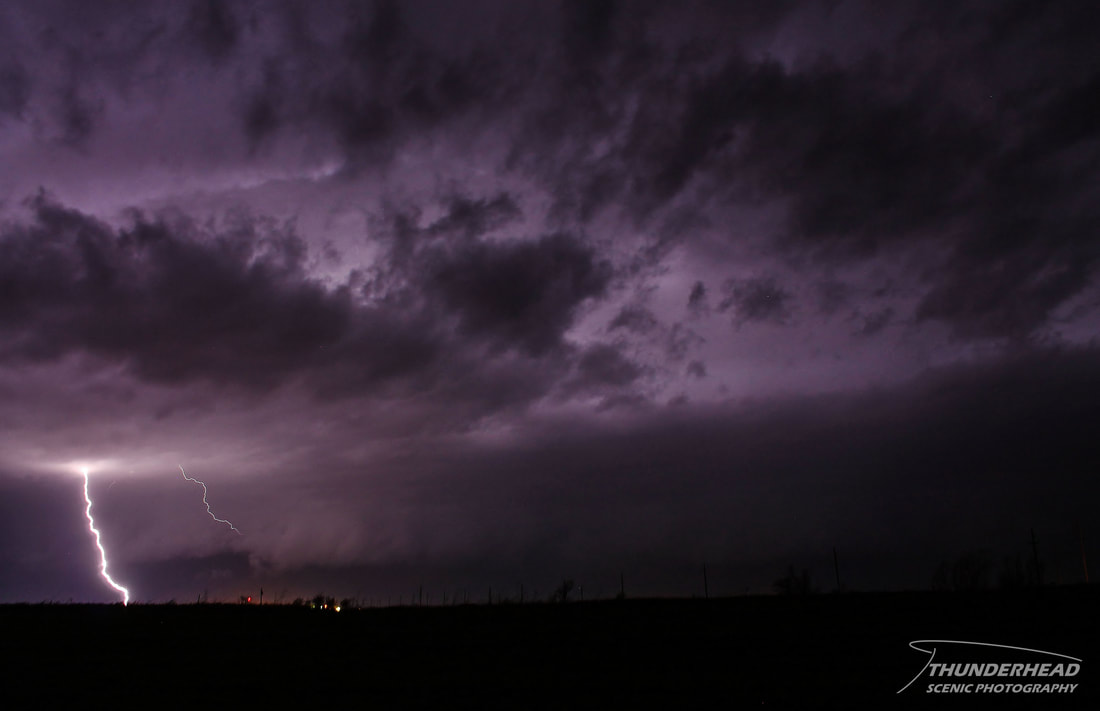