No sooner than the last system passed off the East Coast, the next system was setting its sights on the Midwest. A surface low would bring a warm sector across the southern Great Lakes region, Mississippi River Valley, and Ohio River Valley. Dewpoints in the 60’s coupled with unseasonable amounts of CAPE and high shear would provide the perfect environment for two rounds of severe weather. Round 1 was forecasted to be discrete supercells mostly in Illinois with the potential of high winds, large hail, and strong, long-track tornadoes. This round was to take place in the late afternoon and evening. Round 2 was going to be around midnight as the front pushed through Missouri, Illinois, and Indiana, spawning a squall line that also had the potential to produce high winds, hail, and tornadoes. Michelle and I met up with two of our fellow grad students at Marcus’ place (his page HERE) in the early afternoon so that we could plan where to go while we waited for storms to initiate. They were to fire in southern Missouri and track eastward, but the terrain is unfavorable on that side of the Mississippi River, so we planned to catch them as they entered Illinois. Between 1 and 2pm, a storm formed to the east of Springfield, MO and began tracking to the northeast toward St. Louis, MO. Along its path, it became supercellular and split once, which is always cool to see and a sign of a healthy storm. As it got closer to the Mississippi River, we moved south to get in position for it, which put us near Prairie, IL. Our view of the updraft was partially blocked by the forward flank, but it looked decent, and, judging from other chasers’ pictures, it was a textbook classic supercell:
Unfortunately, once it hit the river, it weakened substantially and then died, most likely due to the poor lapse rates in Illinois at that point in time. Here's what it looked like as it weakened and was sheared apart: 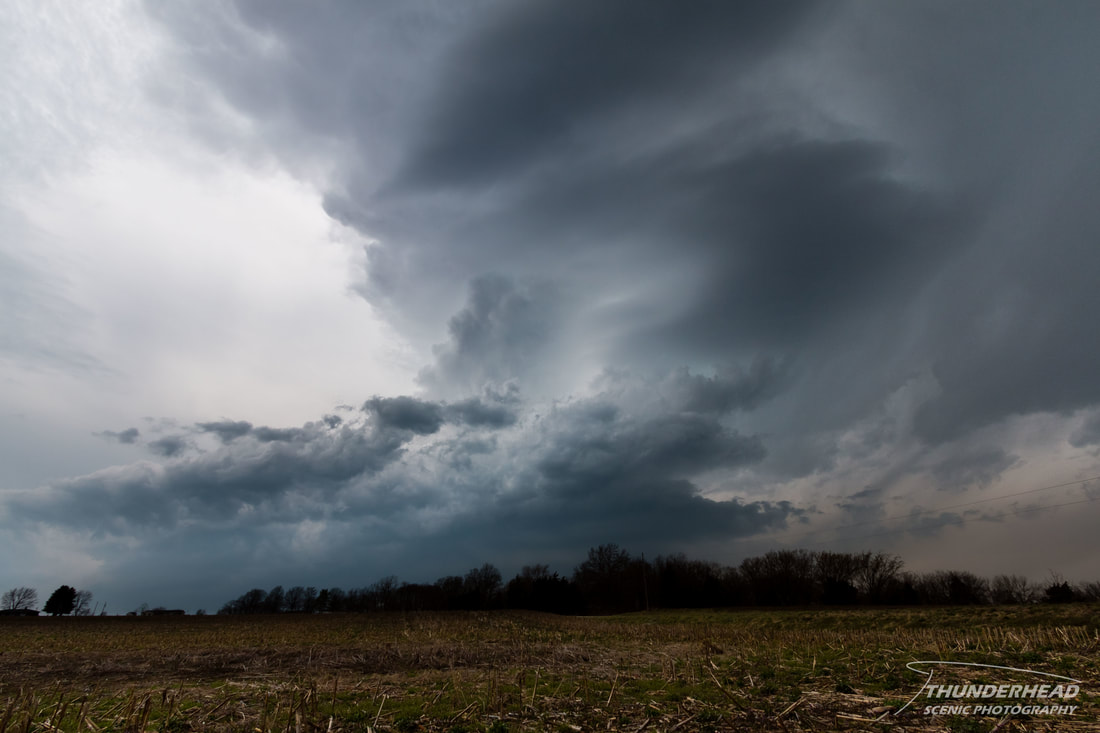 As this storm was dying, a line of broken supercells lined in a west-east fashion was tracking along the same path as the first storm. We waited patiently for those to arrive in southern Illinois as well, but they too ended up being rather bland, only displaying faint structure and the occasional visible cloud-to-ground lightning bolt in the dying light (6-image composite below): 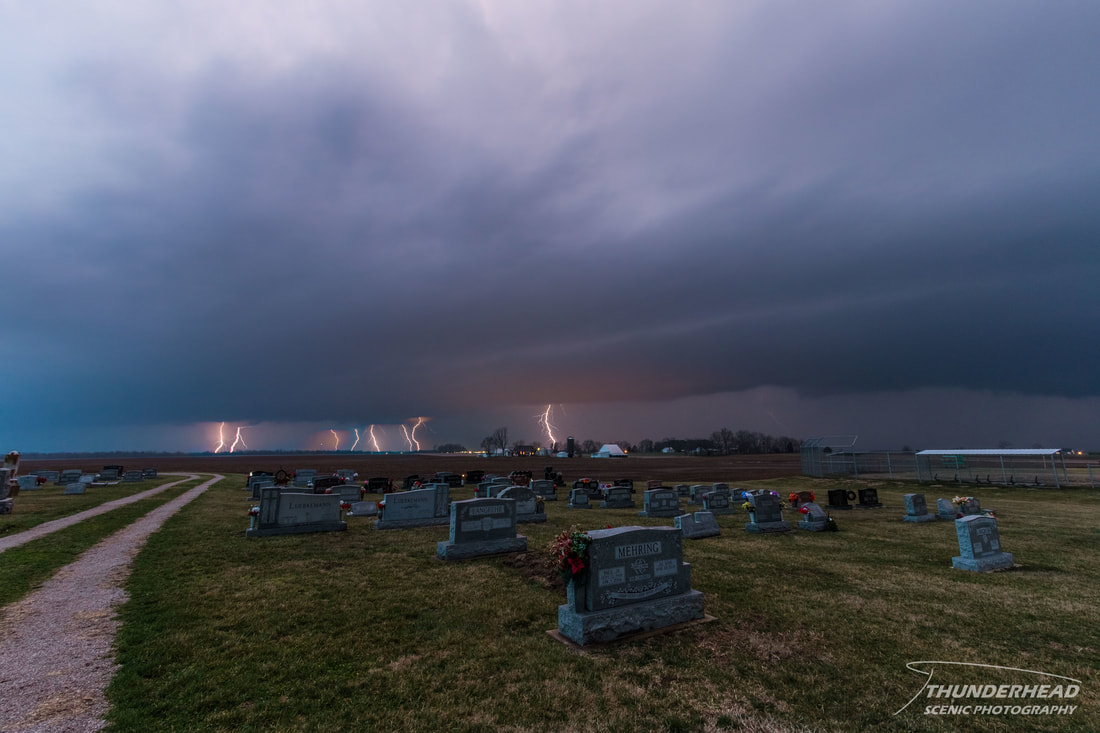 While this was happening, a mean supercell had formed to the southwest of Springfield, MO and was tracking through the Ozarks toward southern Illinois. It looked like it would cross the Mississippi River near Chester, IL, so that’s where we chose for our next target. After stopping for a quick bite to eat, we went down Highway 3 to get into the Mississippi River flood plain for a clear view of the storm, which was tornado-warned as it approached the river. We stopped twice, trying to get in good positioning, eventually settling on a location southeast of Rockwood, IL. As the storm approached, it produced some wicked lightning, but it was all intra-cloud. We held our ground as light rain fell and small hail pelted the field around us as the meso passed to our north. Inflow picked up, eventually reaching approximately 50 mph. That was the strongest inflow I’ve felt since the May 30, 2012 supercell near Childress, TX. There was a flash and I thought I could see something near the bluffs to our right. Seconds later, a power flash lit up a tornado as it hit power lines along Highway 3, right before disappearing behind the bluffs: 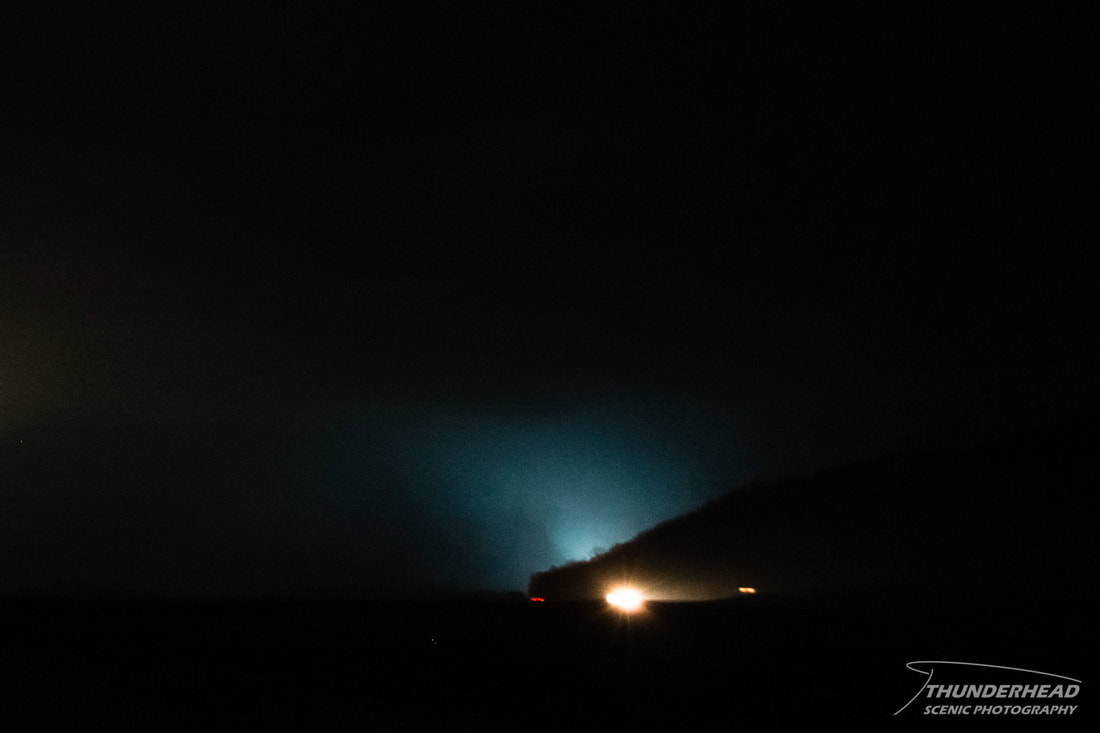 We zigzagged to the northeast toward Christopher, IL, seeing the tornado illuminated periodically by lightning and power flashes. Upon reaching Yellow Banks Rd, which is southwest of Christopher, we came across damage. You could smell freshly cut vegetation and see pieces of trees everywhere. We came up on a small house that was mostly gutted with only the frame left. Emergency crews were already on the scene, so we continued on, dodging debris on the road. It was surreal and tragic to see furniture and personal belongings spread about through the fields and stuck in trees. We eventually came upon a large tree that had fallen across the road, so we had to turn around and find a different route. Eventually reaching Christopher, we fueled up and determined that the storm we had been on was moving too fast for us to keep up on it. Another storm was tracking just to the south of where the previous one had, so we repositioned for it south of Herrin, IL. We found a small clearing south of Crab Orchard Lake and watched as this one raced by. The photo below had a 3-second exposure, which is a rather short exposure for shooting lightning at night, and the clouds were still blurred because it was moving so fast: 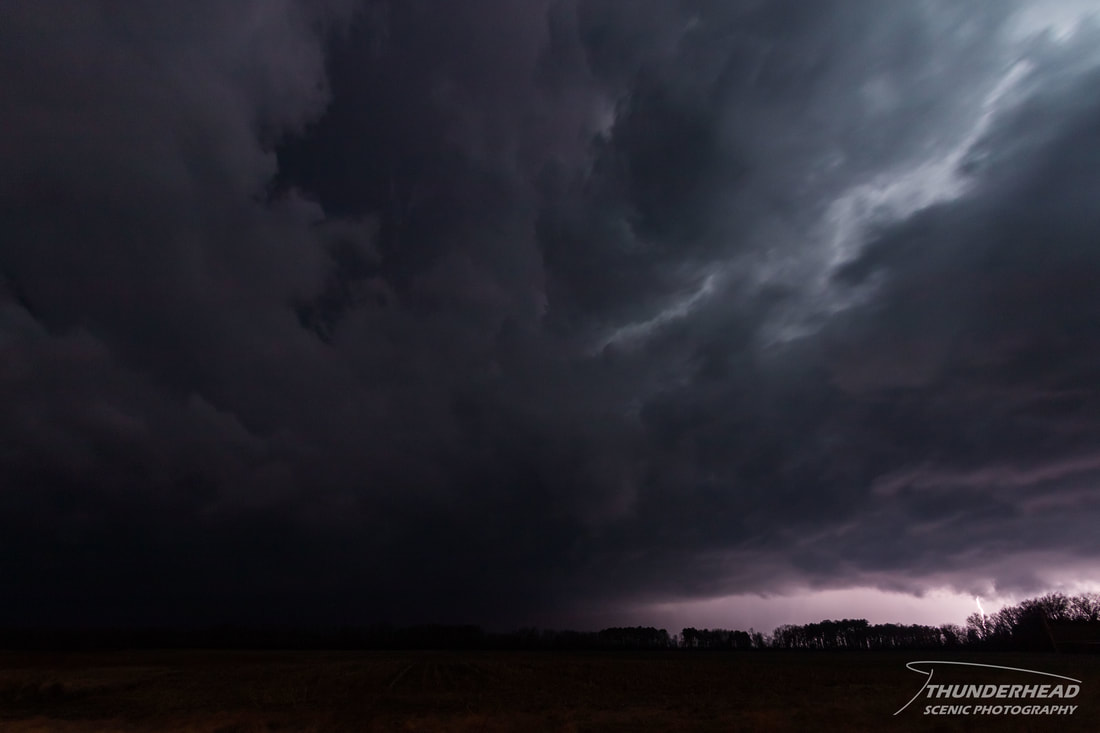 It looked healthy on radar and soon was warned for a confirmed tornado. Similar to the last storm, the inflow increased considerably, but not quite as much. We did see an ominous lowering through the city lights and intra-cloud lightning, but we could not see anything resembling a tornado. After seeing the surveyed track, the tornado was approximately 5 miles to our north, putting it deep within the precipitation and making it nearly impossible for us to see, even with lightning and power flashes. We tried to keep up with this one for a little bit, but given its speed and the poor road network, we gave up and decided to head home on I-57, where we saw emergency crews assisting a flipped semi. This was around the end of the surveyed track, so this was most likely due do the tornado or rear flank downdraft. We continued on to I-64 for home. We considered staying up for the line that was coming through, but we were all so tired, and the line looked like it wouldn’t be worth it, so we called it a night.

First of all, this event was forecasted and warned very well by the impacted NWS offices and Storm Prediction Center. Below on the left is an image of the watches at 9pm on the 28th, which covers one of the largest areas I've ever seen. Below on the right is an image taken from Nick Walker (The Weather Channel) displaying all of the severe warnings issued for this event. Also, below on the bottom are rotation tracks from the storms. The track that stretches from Missouri to Indiana was the storm that produced the tornadoes that hit from west of Perryville, MO through southern Indiana. This storm formed along the Missouri-Arkansas border near Springfield, MO at approximately 2100 UTC and remained a strong storm until crossing the Indiana-Ohio border near Cincinnati, OH, roughly 11 hours and nearly 600 miles later. This supercell was tornado-warned for at least 300 miles of its track and 6 hours of its life. 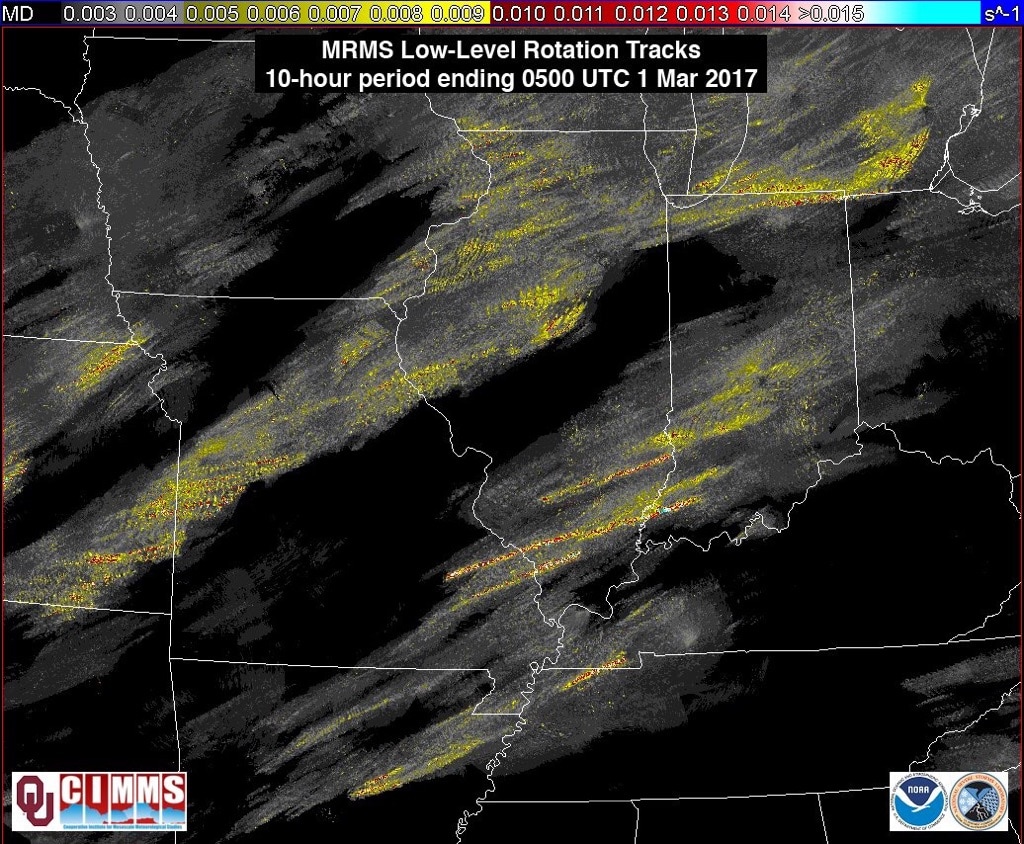 The tornado we saw and tracked through southern Illinois was rated EF4 for damage it caused in Perryville, MO. Below is the track:

​Below is the supercell as it produced the Perryville EF-4 tornado as seen from the Paducah, KY NWS radar (KPAH). One feature that could be seen in the storm from both the St. Louis NWS radar (KLSX) and Paducah radar was a bounded weak echo region (BWER), indicating a very strong updraft in the mid-levels of the storm. This feature can be identified by the donut-like feature that appears occasionally on the backside of the storm (relative to its motion).