A rare chasing opportunity was to present itself on the first day of December. A strong low pressure system was to move into the Midwest and put central Illinois under the threat of severe weather. Above average surface temperatures paired with cold air aloft would provide an unstable atmosphere for storms, and the low would provide enough spin in the atmosphere for tornadoes. Michelle had prior obligations and so was unable to join me on this chase, making it only my second major chase solo (the last one also occurred in Illinois). The convection-allowing models had storms developing and organizing around 3pm in a broken arc from just north of St. Louis, MO to the Illinois-Missouri-Iowa border. Each of these storms would have the potential to be severe and produce tornadoes, but they would have different environments to work with depending on where they formed in the arc. The northern tier had winds that were more backed at the surface thanks to the low, while the southern tier would have a little more moisture and CAPE to work with. I had two targets due to this, and figured I would decide on which one as I travelled; however, I favored the southern target.

I left St. Louis and travelled north in the early afternoon. Shortly after I left, I noticed echoes showing up on radar well to the north of the St. Louis area. The storms were forming a little sooner than I had anticipated and were focused more to the north as well. Since the models seemed to consistently favor storm development in the northern tier more than the southern, I decided not to risk sticking around St. Louis and hurried northward - a decision that would later come back to bite me. As I made my way north toward the I-72 corridor, one of the storms became more organized and stronger than the rest. One thing I foolishly did not account for with this northern target was the northward storm motion of the storms that would form in this area, as opposed to the more northeastward motion in the southern target area. This meant that this storm was moving directly away from me as I was trying to catch it, which is not a good position to be in.

As I got within viewing range of the this storm’s base, I noticed it had somewhat of a broad, cone-shaped lowering just south of I-72 near Griggsville, IL. Given my distance from the storm (~15 miles), I could not see if this feature was rotating, but I took it as a sign of the storm’s health. Shortly thereafter, it became tornado-warned and did end up producing a tornado near Griggsville as was seen in other chasers’ footage. The top of the tornado was within my view at this time; however, due to my distance from the storm and the fact that the tornado was not fully condensed, I could not see the tornado. At this point, I was faced with a tough decision. Even though this storm was moving north at 30-40 mph, I could not directly drive directly toward it due to the road network around the Illinois River, which was just to my west. This would make catching up to the storm very difficult, and there was no telling if I would catch it prior to it potentially dying or weakening. Given that there was a weak supercell immediately to my west, I decided to just stay put and watch the tornadic storm move away (photo below) from my position near Winchester, IL and the weaker storm pass to my west. 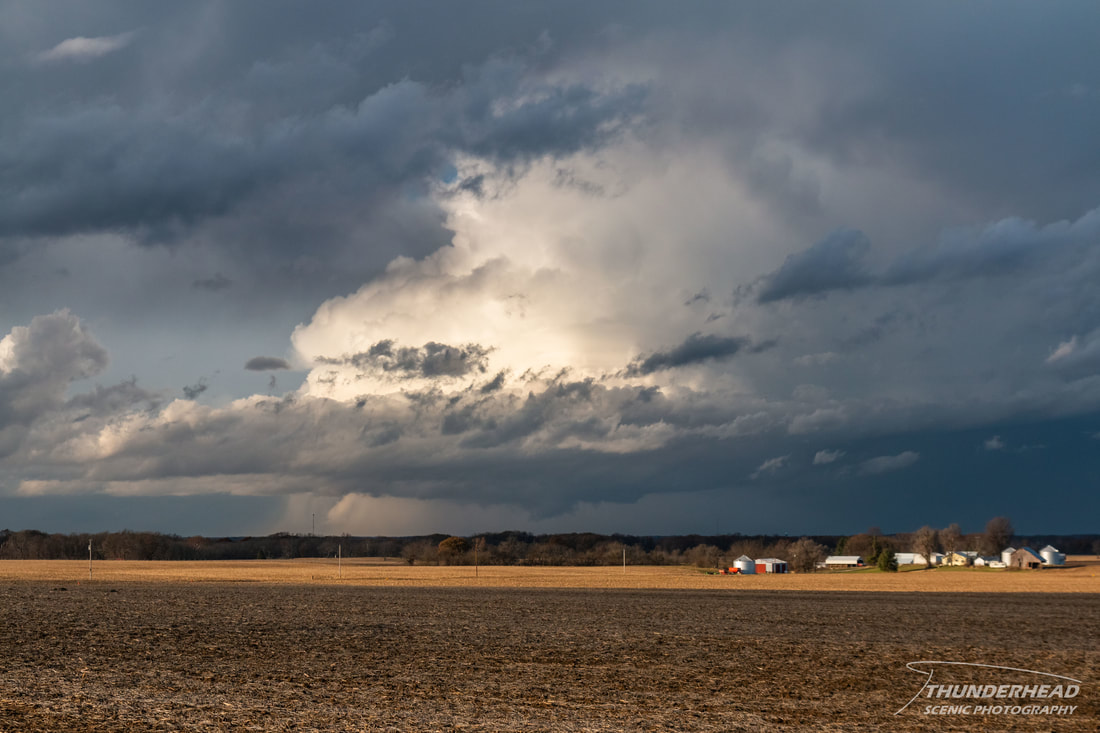 The western storm tried its best to be a supercell and even structurally looked like a supercell (photos below), but its mesocyclone was just too weak, and it remained a disorganized blob on radar.
A scrawny updraft to my west also provided a cool scene: 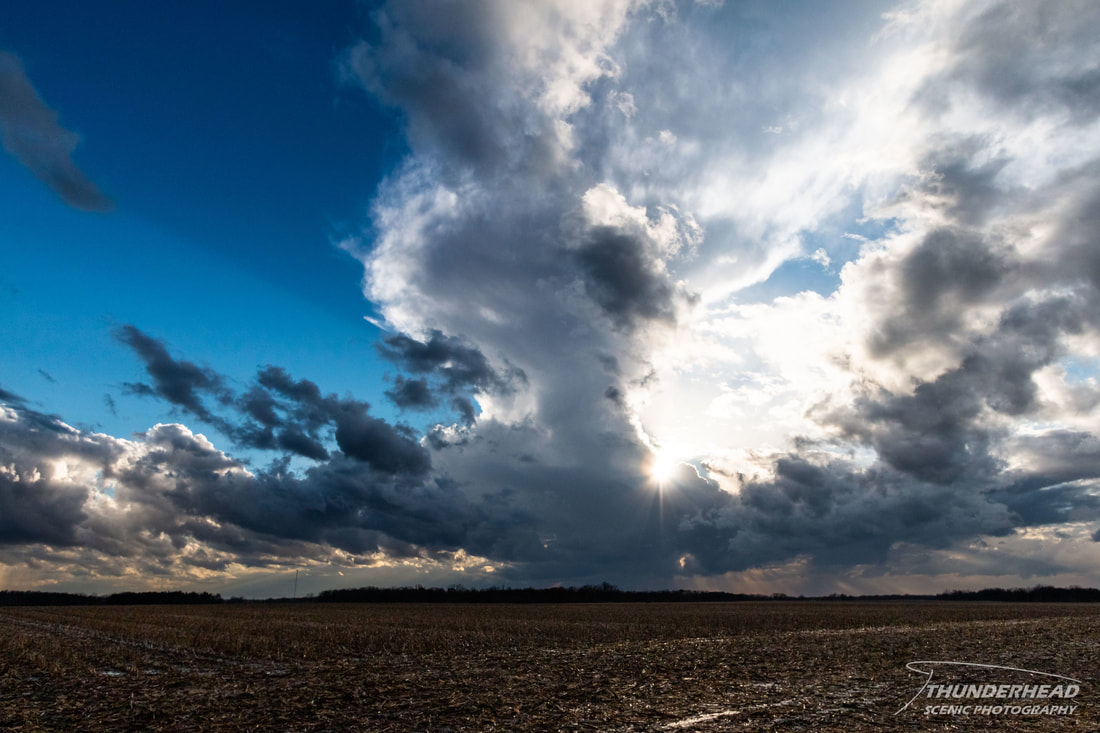 I was tempted to follow the disorganized blob northward since the previous cell was still producing tornadoes, showing that the environment was prime in that general direction. However, a cluster of storms, some showing supercellular characteristics, was developing north of the St. Louis area. One of the stronger ones was over the town of Carrollton, IL, about 30 minutes to my south, so that’s where I went. Along the way, I stopped a few times as I passed along the backside of a weaker storm to capture its beautiful coloring and texture:
Unfortunately, too many storms had developed too close together, and they began to negatively interact and turn into a disorganized mess. Shortly before this point, I had noticed a severe- and then tornado-warned supercell near the town of Litchfield, IL. On radar, this was one of the strongest storms I had seen this entire day and it had no other storms to interfere with it. Even a smaller, less impressive storm just to its north was also tornado warned. I contemplated going after them, but I was 1-1.5 hours away from their location and would not be able to catch them prior to the dimming evening light, making chasing difficult. I decided to stay put on the backside of the disorganized mess that had become my target storm(s) and watched as the setting sun provided some dramatic coloring and scenes: 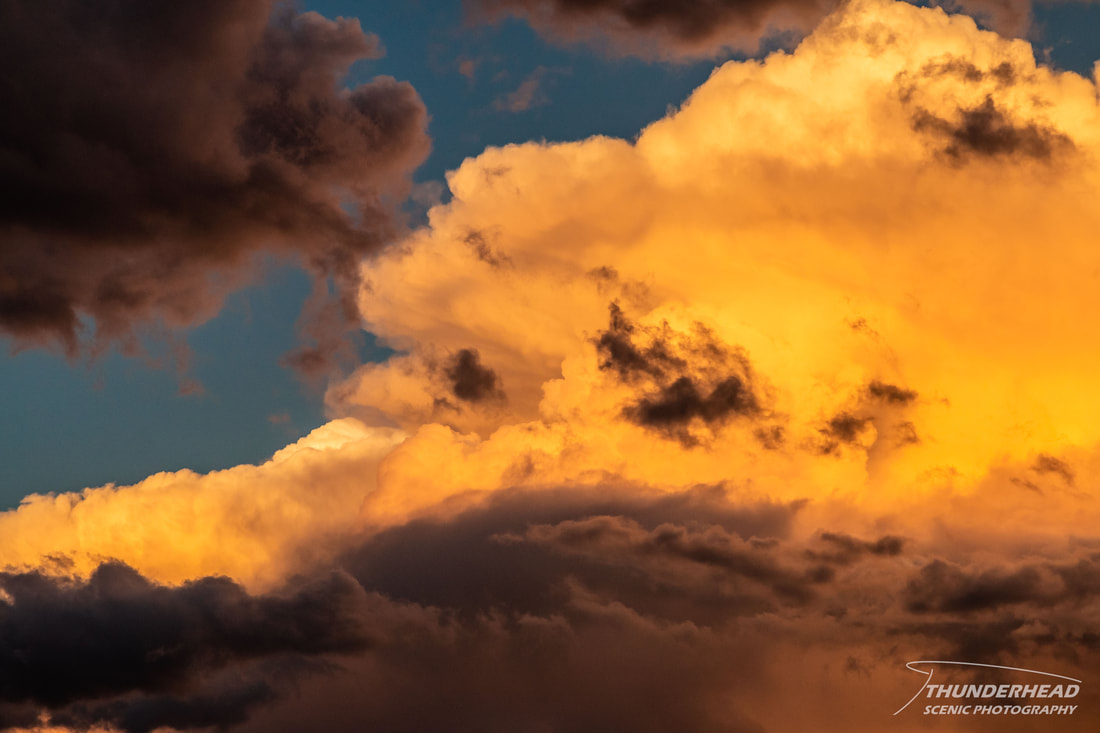 My being out of place for the Litchfield-area storms is the result of the “decision that would later come back to bite me”. These were some of the southern-most storms, and the larger one formed almost right over my southern target. While the models did have convection more consistently in west-central Illinois, the HRRR was also pretty consistent with forming a stronger storm on the southern flank of the arc of storms, just to the northeast of the St. Louis metro area, which is exactly where this storm formed. Again, while the environment through all of central Illinois was ideal for tornadoes, I felt that the southern portion of the threat area would be a little better. Reviewing both chaser and “citizen” footage, the larger storm was very beautiful, especially by December in Illinois standards, as it stood isolated in the rural Illinois landscape, lit by the setting sun. The tornadoes both storms produced were also scenic, as they were fully condensed and not shrouded by rain. It seems more times than not, sticking with your gut when chasing is the best idea.