I had been looking forward to this day for over a year. For the first time in nearly 100 years, a total solar eclipse was to track from coast to coast, cutting right through the center of the US. The path of totality was to glance the city of St. Louis, MO; covering the western and southern suburbs. Fortunately, this is roughly the area in which I live, so I had a front row seat to take in the event. However, I wanted to maximize our potential of seeing the greatest duration of totality possible, so I considered traveling to southern Illinois. After thinking about that approach for several weeks, I realized that my in-laws’ house, which is a quick drive away, was about 7 miles from the center-line of totality. This provided us a place to sleep over the night prior to the eclipse to avoid the forecasted traffic jams in the morning, enjoy some home-cooked meals, and have a potential good view of the eclipse, so it obviously became Michelle and my new destination.
​
Once the 21st came into reach of the typical extended forecast range (7-8 days), people across the country began to freak out about cloud cover, which was understandable. The weather pattern was shifting to one that could cause large storm systems to track across the nation’s midsection, producing extensive cloud cover. The cloud forecast for the St. Louis area was looking bleaker and bleaker as time got closer due to the potential for storms to the west of the area. There also was a slight chance of showers and thunderstorms in the area during the time of totality. Looking at the weather models in the days leading up to the event, I felt (and hoped) there was a decent chance of seeing most of the eclipse.​

I awoke the 21st and immediately checked the visible satellite imagery. I was pleasantly surprised to see that an overnight storm complex in Iowa stayed to the north instead of diving southward toward St. Louis as some weather models had forecast the night prior. The skies over the area were mostly clear and seemed to be getting better by the minute. As promised, the eclipse started at our location at 11:49am CDT. Below are images of the eclipse at various stages and times.
Cumulus clouds occasionally obscured the sun from view throughout the first 45 minutes or so of the partial eclipse, but never for more than a couple minutes. About 20 minutes before totality, the sky almost completely cleared up over our location, and would stay that way through totality.

As totality neared, everything was cast in a yellow-ish tint. It wasn’t quite like the sun was setting; just that the sun was growing dimmer. Birds began to quiet down and stopped flying, just as cicadas and crickets began to chirp. As the light faded even more, street lights throughout the neighborhood began to flicker on. Moments before totality, it seemed like everything turned a shade of blue. We had set out a white blanket to lay on, as well as to see this next eclipse-related occurrence:  shadow bands. These are also sometimes referred to shadow snakes, as they are thin, long dark strips that “wiggle” around. I began to fumble for my phone to take a video, but just as quick as the shadow bands appeared, they disappeared. Totality had struck as the moon completely blocked the sun.  The sun’s corona became visible, streaming out in every direction: 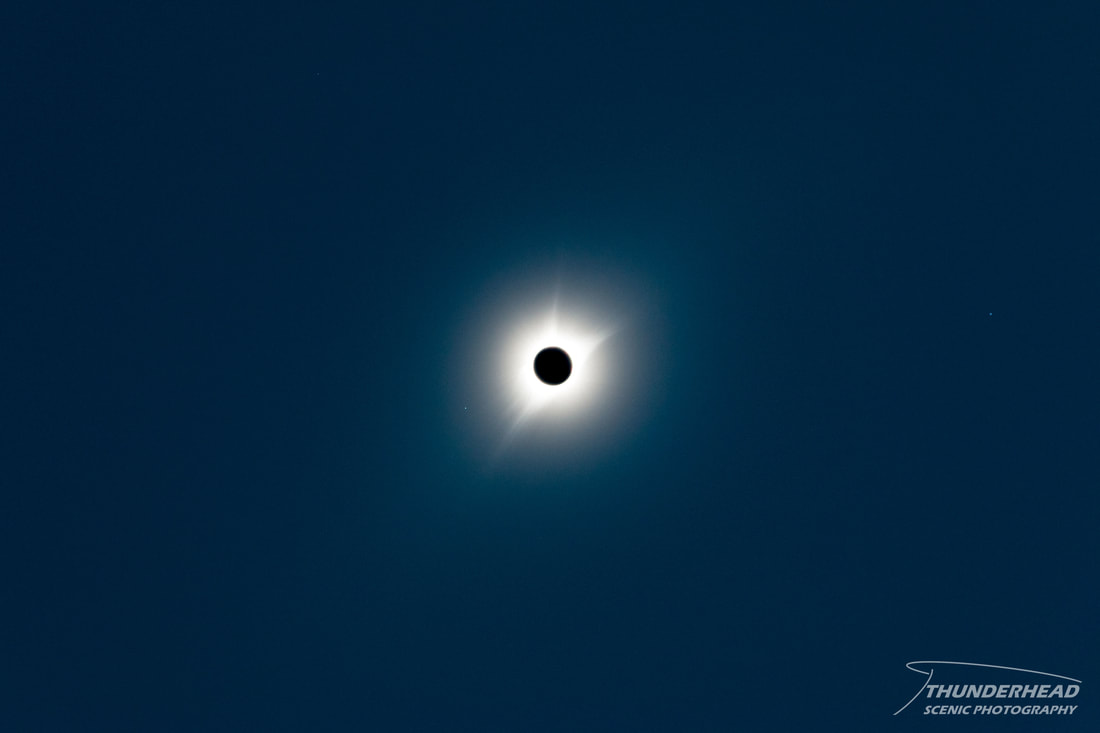 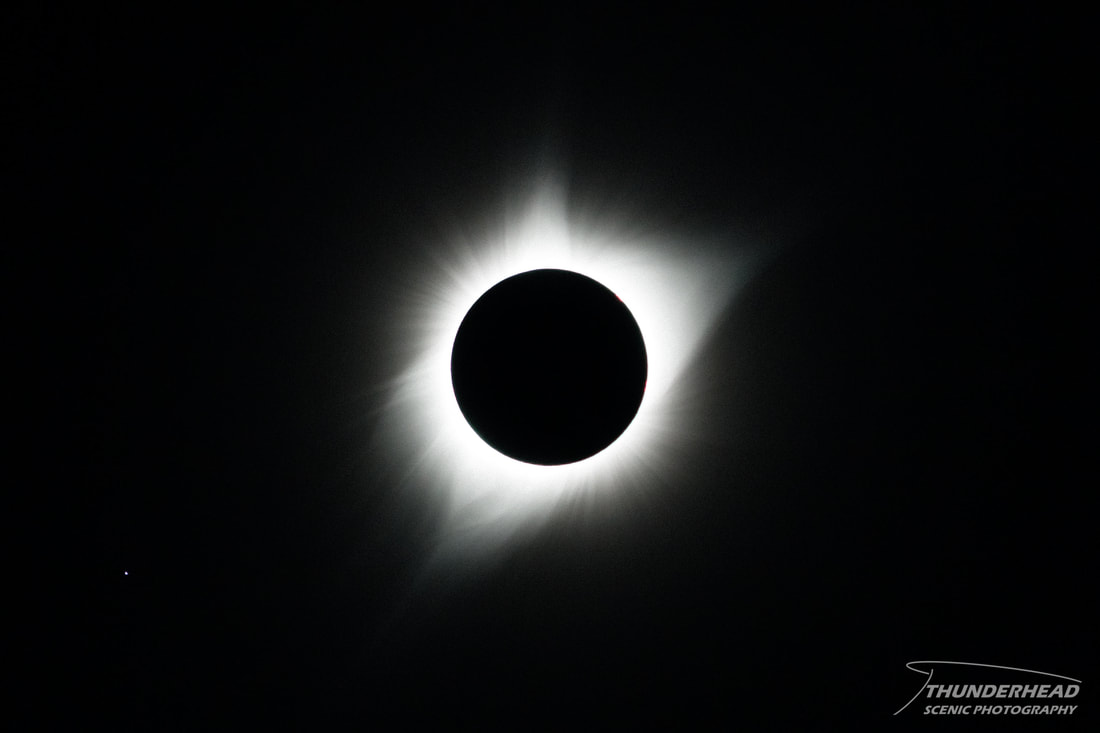 The pinpoint of light near the bottom-left corner in the above photo is the planet Mercury. That was the only other bright object I noticed in the sky. Michelle said she noticed a couple other planets/stars, but the humid conditions prevented us from being able to find most of the planets and stars you’re supposed to be able to see. It also did not get quite as dark as we had thought it would. The sky turned a very deep shade of blue, and the horizon was orange/yellow, similar to the colors you would see shortly after a sunset, but not quite the same thing. The wind had died off completely, and the temperature had dropped by several degrees. The St. Louis National Weather Service has a page that displays how temperatures at various locations in the St. Louis area were affected during the eclipse HERE.  At our location, we were to expect about 2 minutes and 30 seconds of totality. That was the quickest 2 and a half minutes of my life, but it was also one of the coolest experiences I’ve ever had. I failed to notice  Baily’s Beads, as totality began and ended much faster than I had anticipated. Once the sun became more crescent-shaped, we did notice crescent-shaped shadows on the driveway as the sunlight passed through the trees: 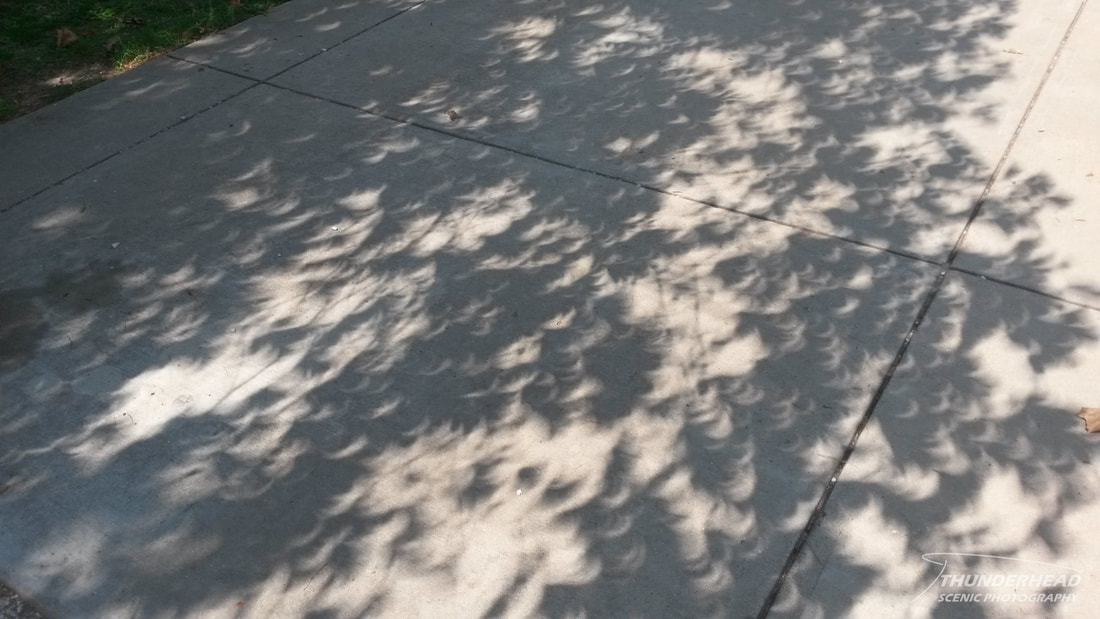 ​This was truly an awe-inspiring event and something I will never forget. There are no pictures, videos, or descriptions that can come close to replicating what it’s like. While it may be difficult to do so, I highly encourage that if you are able to do so, try to view a total solar eclipse. Below is a composite of the eclipse phases before and after totality, as well as the eclipse in totality:

​Below is a time lapse that captures the period shortly before and after totality:
​If you would like to learn about eclipses, check out NASA's Eclipse page or timeanddate.com's eclipse page.