This day was a huge bust for me, but I feel it's important to discuss, mostly to point out that chasing isn't always tornadoes and rainbows. The models had been fairly consistent with bringing a deep trough down through the Midwest, and with it, the potential for severe weather. It was looking to be a four-day event with April 8th being out in the western Great Plains, the 9th being the Great Plains, the 10th being the Mid-Mississippi valley, and the 11th being the Southeast. There was some hope, but this didn’t look like the best system, given the positive tilt of the trough, among other factors. I had strong doubts about the severe potential, but Michelle talked me into going chasing on the 9th. Michelle and I got on the road around 8:15am and headed down I-44 to our target of Seminole, OK. As we kept driving south, we could see that the cloud deck was holding steady, severely limiting surface heating. There were a few breaks in the clouds here and there, but nothing good enough to help break the strong cap present in the warm sector. By the time we got close to our target area, which had changed to Ada, OK, cells had formed along the very strong cold front in south-central Kansas, but were becoming quickly undercut by the fast-moving front. We reached Ada and kicked a soccer ball around in the park for a bit, waiting to see if anything would happen anywhere in Oklahoma. There were now some cells and a supercell or two down south across the border in northern Texas, but they also fired along the cold front and were soon undercut. I was pretty much done with this chase but Michelle was still holding hope for something. A persistent severe supercell was down in TX, but out of play, and there was no telling if it would hold together long enough for us to get there. A squall line was actually forming 100 miles or so behind the front in Kansas and the Storm Prediction Center issued a watch for it. It had 2 inch hail, 70mph wind gusts, and frequent lightning from what the watch said. Good storm parameters had been forecast behind the front, but it was crazy that there was actually strong convection back there. After talking and weighing our options, we decided to head back home so that we would not be out of play for Wednesday the 10th. As we turned to get on the interstate south of Oklahoma City, the front moved through and we felt a 10-15 degree drop in temperature immediately, which was interesting to experience. We took turns driving and napping, making it back to the St. Louis, MO area at 4:30am. I ended up getting back home about 5:15am. Yikes.

I woke up feeling better than I thought I would, given that I had just gone to bed four and a half hours prior. Looking at the models and forecast discussions, this day's storms were forecasted to be mainly linear. The worst of it was going to be along the Mississippi River down in Arkansas and Tennessee, but there looked to be enough parameters coming together in southern Illinois to make it worth it sticking around the St. Louis area. This was especially so, given that we had just driven two states away for nothing the day prior. As the morning dragged on, conditions looked better and better for supercells and maybe a tornado in southern Illinois. Around mid-day, cells began to fire south of St. Louis in the warm sector where the clouds had cleared up, feeding off of some decent surface heating. Red Bud, IL was our target, and sure enough, as we got on the road with a couple of our fellow meteorology students around  2pm, two cells began to go supercellular and track toward that location. We got within view of the updraft of the northern cell (photo below), but there was a lot of rain falling in and near the updraft. It didn’t look visually appealing and we could see it weakening on radar after about 20 minutes. 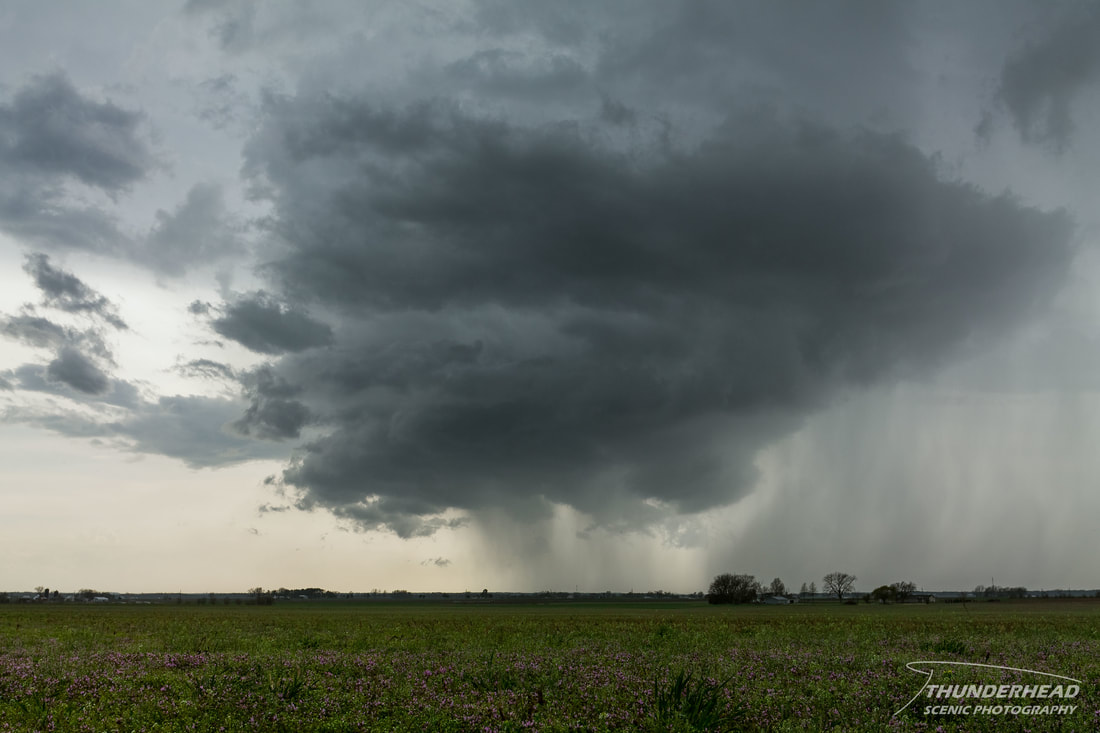 ​However, the cell to our south was beginning to look healthy on radar and visually (photos below), so we decided to go after it. We skirted around the west side of the storm near around Sparta, IL.
​It was developing some decent structure, as it was discrete and became the dominant and only remaining cell out of the original cluster of about 2-3. The updraft looked solid, and we were seeing good mid-level inflow and several updraft punches. As it progressed eastward through southern Illinois, it went tornado-warned and developed a healthy meso: 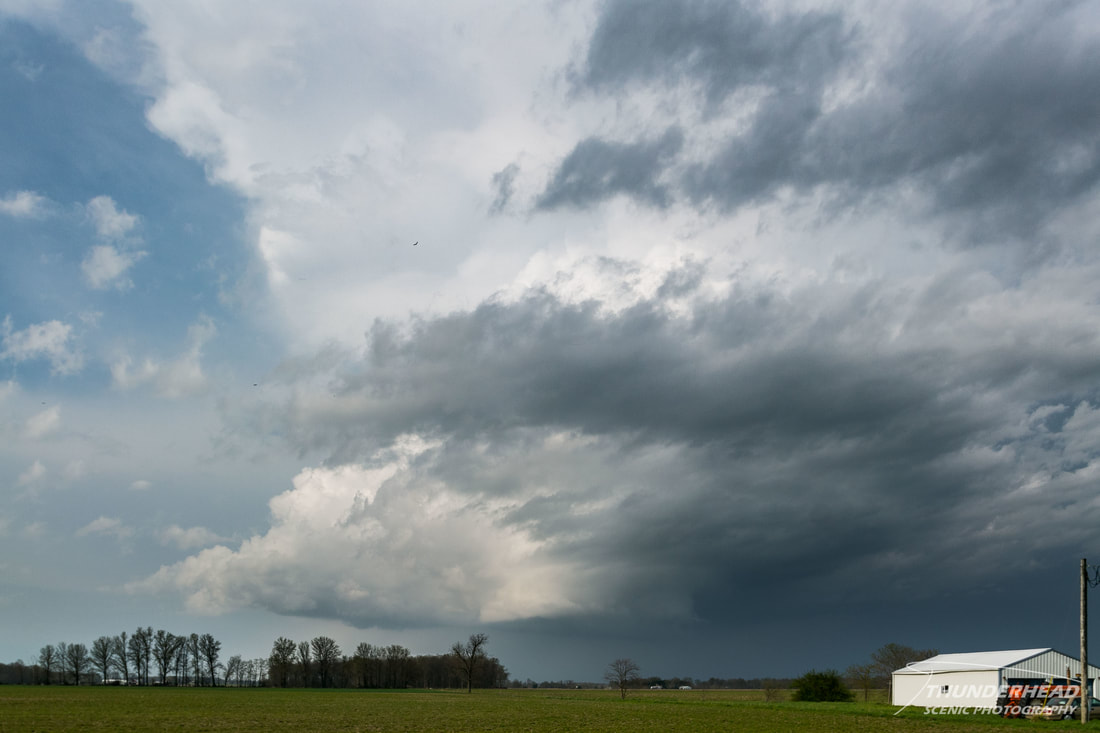 We didn’t see any ominous lowerings prior to this point, but just east of Du Bois, IL, the storm went nuts. Suddenly, you could see inflow coming from the forward flank and the meso lowered substantially. Soon after that, a nice wall cloud formed and looked to have healthy low-level inflow. This all happened within about 5-10 minutes: 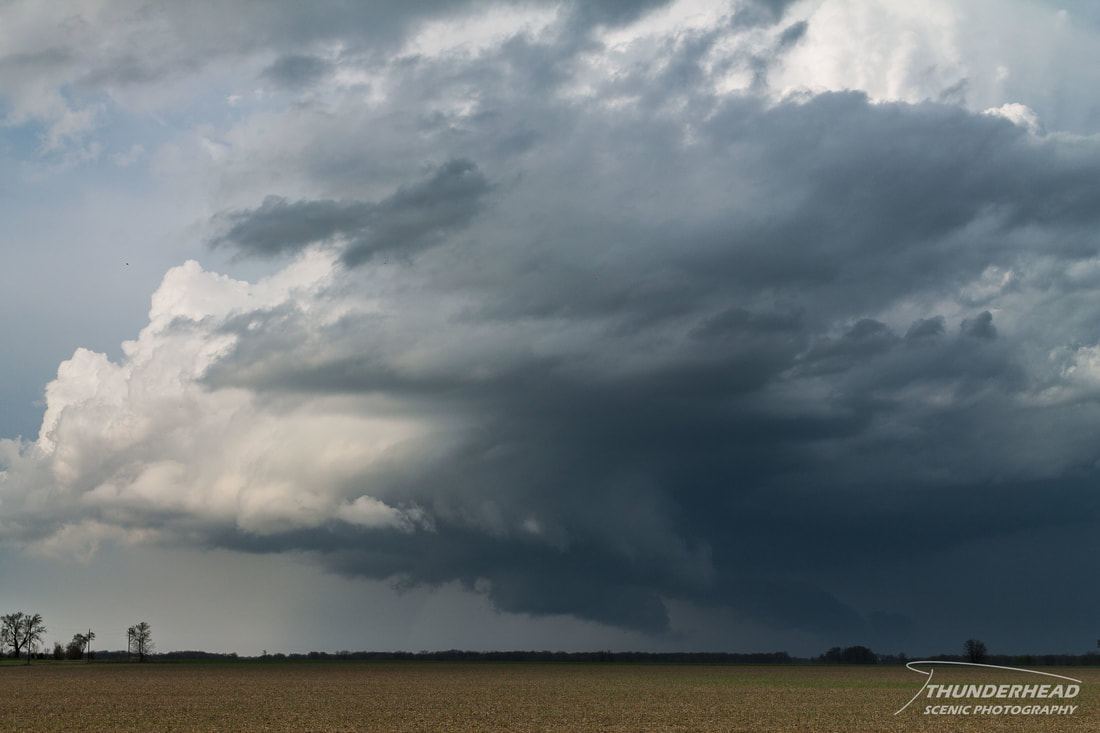 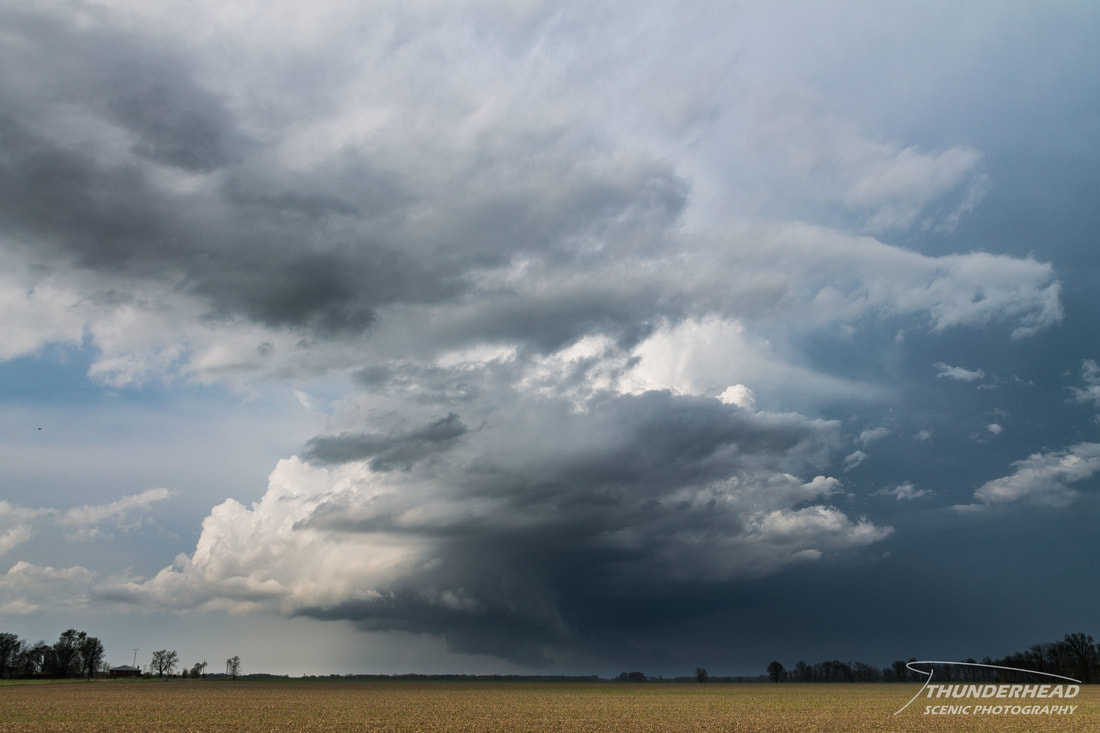 It seemed like it was seconds away from producing a tornado, but it never did, and all the low-level features disappeared just about as quickly as they had formed. Overall, though, the storm was still was going strong and was tracking to the north of the Mt. Vernon, IL area. We headed toward Mt. Vernon to go north on I-57 right as it strengthened again: 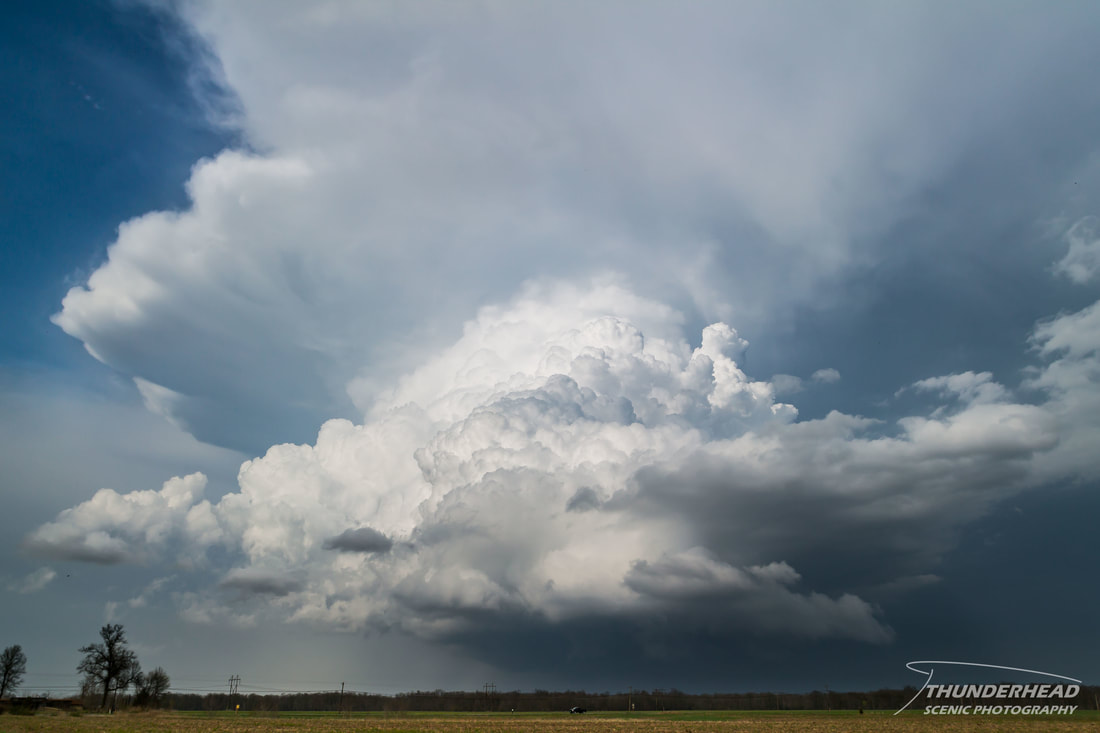 That trend reversed, though, as we went north about 10-15 miles to watch it slowly start to die. The mid-level inflow tail to the south seemed healthy and strong, but the updraft was not looking very healthy and there was rain and hail falling in it: 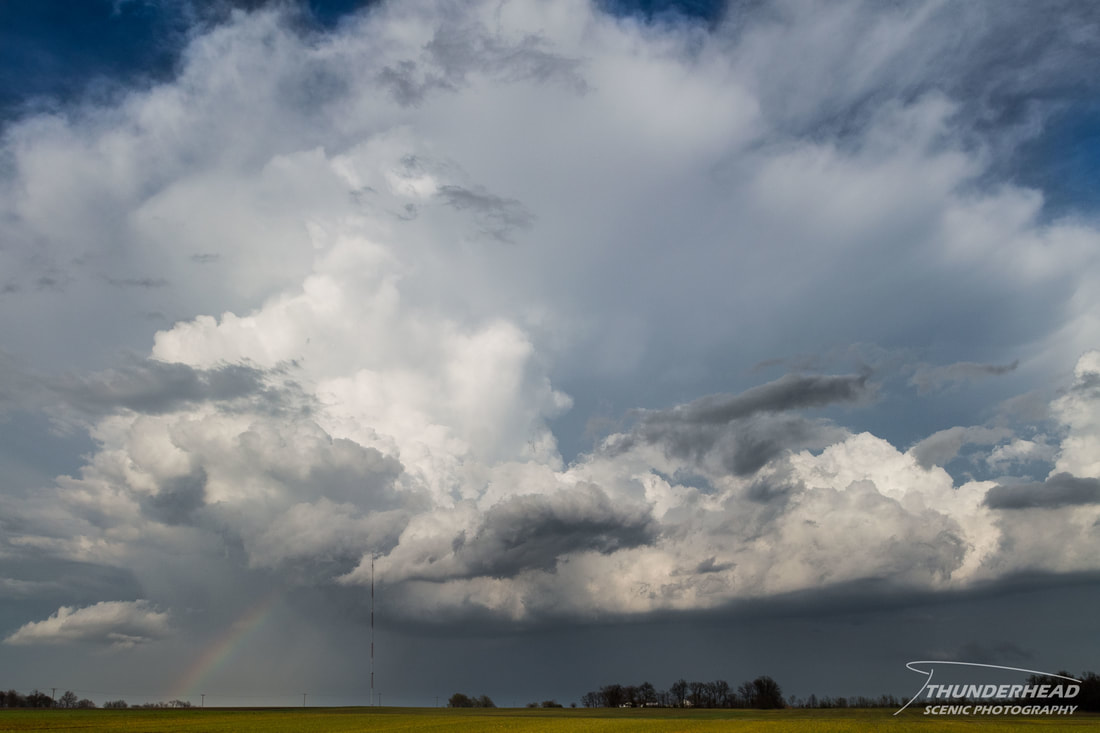 We watched it for a few minutes more before turning back and heading toward Mt. Vernon for a quick bite to eat. After that, we traveled back toward St. Louis, where a very strong squall line was getting ready to push through the area. We watched it from a hill overlooking downtown St. Louis. Below are the only post-worthy photos I captured of this potent line as it passed over downtown. It produced several tornadoes across the St. Louis metropolitan area, including an EF2.
​
​The Storm Prediction Center's summary for this event can be found HERE.