2014 was off to a record breaking start in lack of tornadoes and severe reports in general. However, the period of April 23-30 was looking to be an active severe weather pattern. A huge cut-off low would slowly make its way through the U.S. with lobes of vorticity rotating around it, spawning several waves of activity. The first wave brought messy supercells to the Texas panhandle on the 26th. The next wave on the 27th caused SPC to issue a High Risk over Arkansas. This wave spawned several supercells, with one putting out a nasty EF-4 tornado that ripped through Mayflower, Vilonia, and several other Arkansas communities, killing several people. Round three was on the 28th, and that was where Michelle and I came into play.

A very dangerous set-up was down south in Mississippi and Alabama, where SPC issued another High Risk. However, this area is obviously not good chasing terrain, and too far away for a one-day chase, which was all we could do. A surface low and associated triple point was set to move across the Missouri-Iowa-Illinois border area. CAPE was supposed to be decent and wind profiles were okay for supercells. Nothing screamed tornado or supercell, but the ingredients were there for a quick, weak tornado. We set out for our target area east of Quincy, IL. The clouds were clearing in this region, so we figured surface heating would help things out. Between 1 and 2 p.m., a cluster of storms fired just to the northwest of the St. Louis, MO area. Storm motions were to the northeast, so this cluster was heading in our direction. The cluster grew upscale into a line that was broken at times, solid at times, and was mainly a hail threat. The storms began to get closer to our position, but really didn’t provide anything interesting to look at: 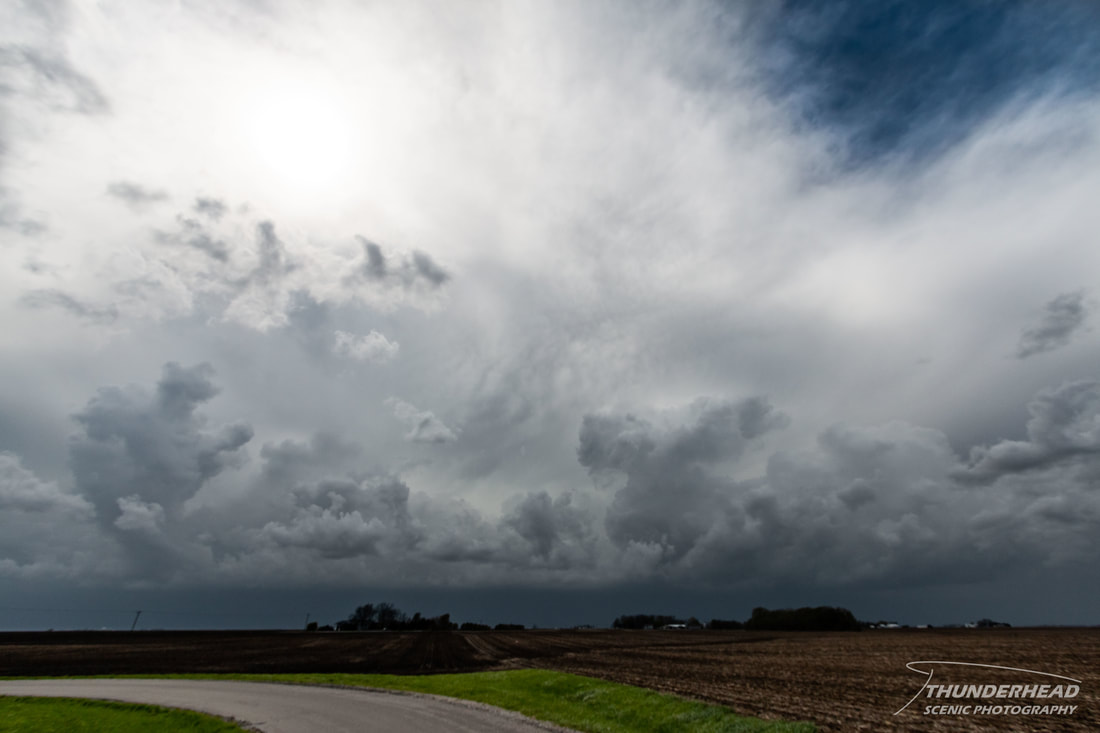 We kept out in front of it for about an hour or so before it began to show some shelf structure:
Unfortunately, the shelf-look went away. At about this time, a storm became tornado-warned north of St. Louis and would pass to our south in about an hour. We went east to Decatur, IL and then south from there to our intercept target of Pana, IL. The storm was embedded in a line that was beginning to accelerate, which ended up putting Pana out of play. We had to move further east before we moved south, so we got off the highway at Moweaqua, IL and went east on a back-road. As the storm began to approach us, the tornado warning was dropped. It did provide some cool skies, though: 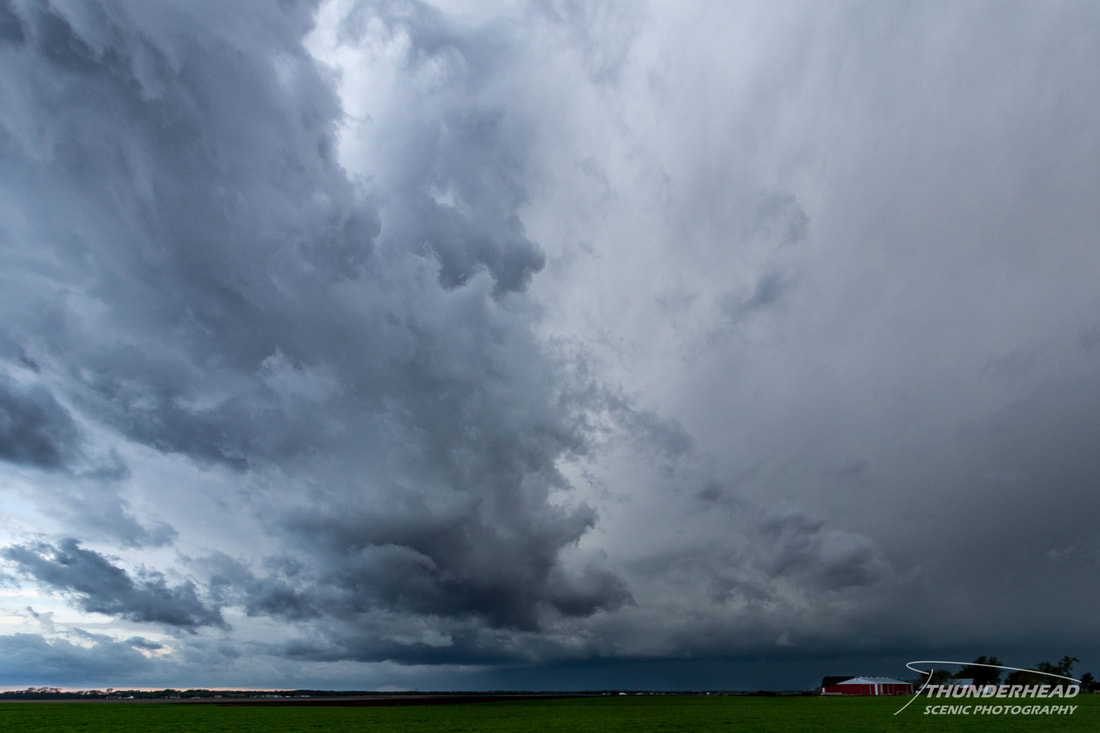 Again, we kept out in front of this segment of the line. It did go severe-warned for wind and hail, and also began behaving differently from the rest of the line in terms of motion and appearance. Michelle and I had stopped for pictures and noticed an area in the line appeared to have no precipitation falling. I checked the radar, and sure enough, there was a weak echo region in that location, and the velocity field showed broad rotation. It began to intensify and several funnels formed and dissipated, one looking strong (picture and quick time lapse below). 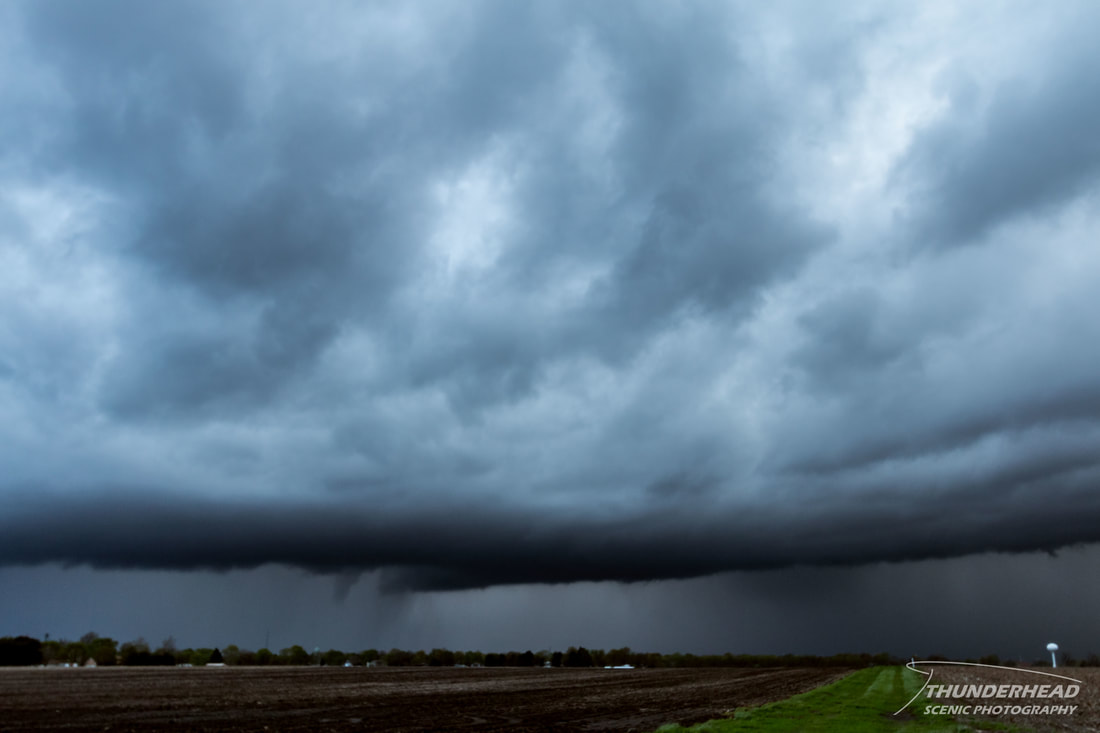 Fortunately for the town of Sullivan, IL, it remained just a funnel. Below is reflectivity and storm relative velocity from KILX prior to, during, and after the funnel seen above:

We continued to keep up with the storm as it kept trying to spit something out. A very surge and notch were now apparent in the line: 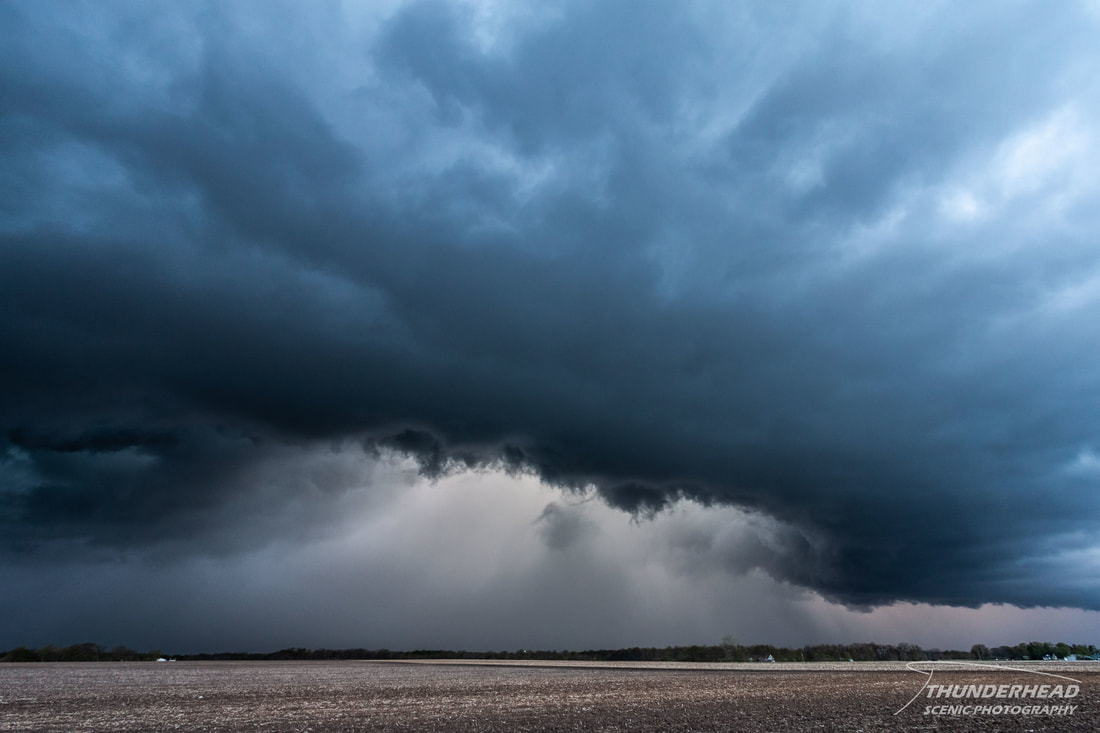 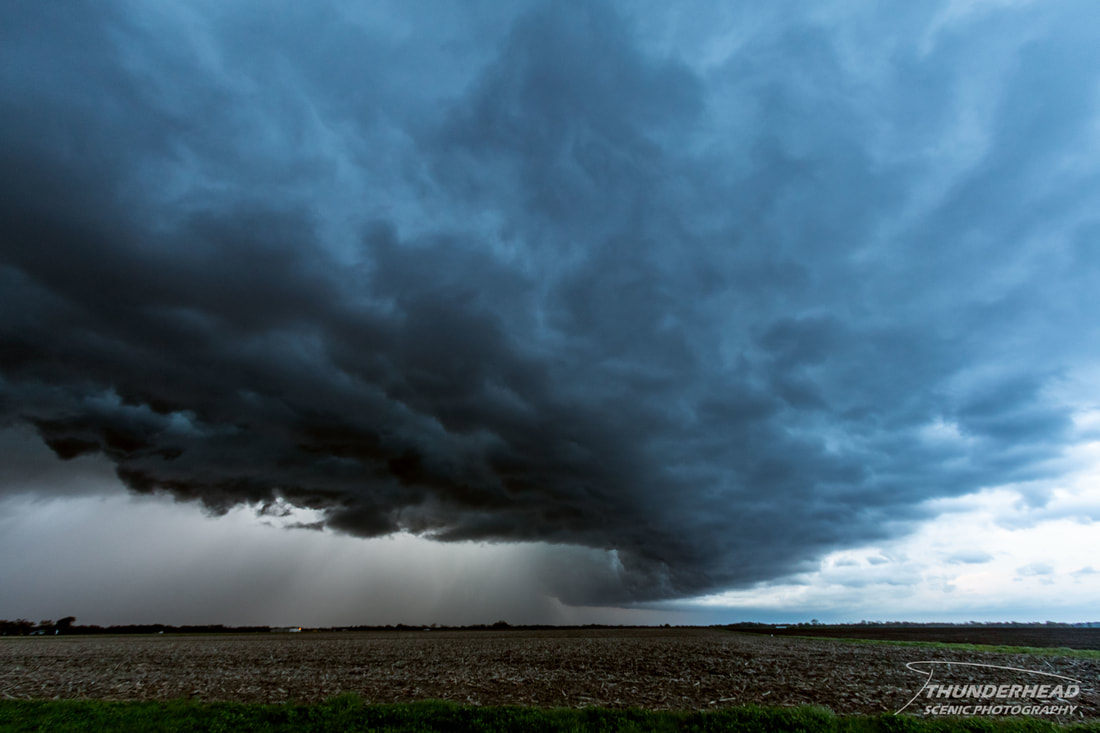 It produced what looked to be another funnel that would have been a very scenic tornado had it touched down: 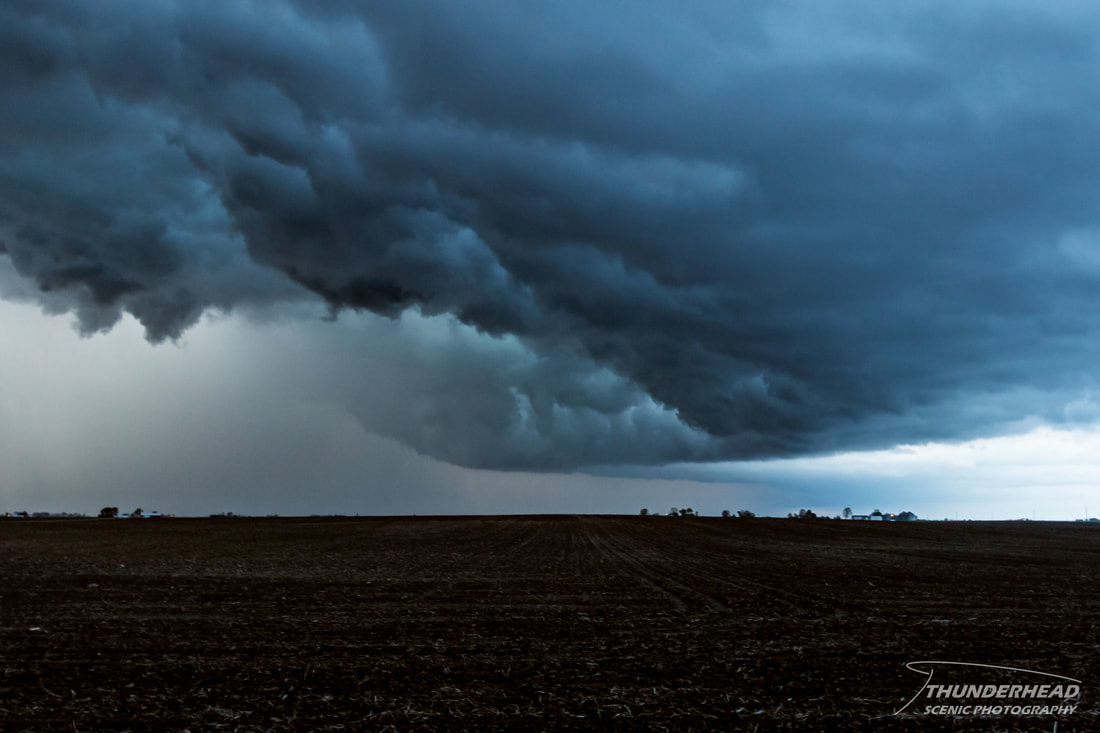 I believe it also would have been out in the middle of nowhere, which was obviously preferred. We kept up with it a little while longer and then, as predicted, convection began to weaken with the setting sun. The cell became outflow-dominant, and all warnings were dropped. As the outflow strengthened, the sky became very turbulent, producing the scene below: 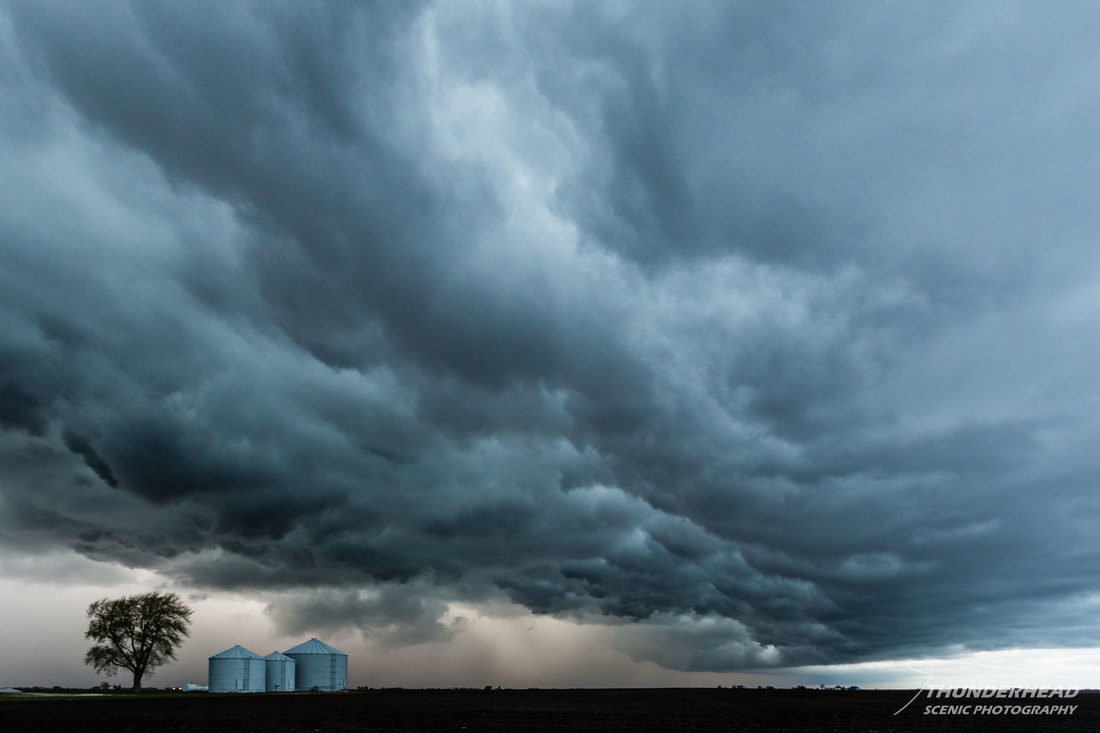 We watched this for a while before calling the chase and heading back home.