After the previous week’s terrible and costly bust in Oklahoma, I was looking ahead to redeem myself. That redemption came in the form of a system looking to track across the Great Plains and Midwest, putting the Oklahoma area under the threat for severe weather again. As much as this tempted me, I wasn’t planning on traveling very far, given the previous week’s incident. The set up for this system was extremely similar to the previous week’s event: a surface low would form and track from around the TX panhandle through central KS and into IA with a trailing cold front and dry line providing lift across Oklahoma. The GFS and NAM were disagreeing greatly on the speed of this system. The GFS was slower and had a huge warm sector in place by the time storms would fire, while the NAM had the system moving quickly and not developing much of a warm sector. I was worried about the speed of the cold front and that it would undercut anything that would try to fire, just like the last Oklahoma chase. I waited until the very early hours on April 17 to decide that I did want to go out, and Michelle wanted to join. About the time we passed the Oklahoma-Missouri border, storms began to fire along the dry line in western Oklahoma. By the time we were getting close to our target of El Reno, OK, the first supercell had been going strong to our southwest, but was beginning to die. When we got to El Reno, the temperature plummeted, meaning that we were behind the front. We went south on Highway 81 toward Chickashaw, OK. On our two mile relocation, the temperature rose 12 degrees. Holy temperature gradient! We continued farther south to get in position for the first supercell in a line of two. This storm pulsed several times in intensity, occasionally displaying strong rotation on radar. We danced around on Highway 81 for a while, trying to get in good position for it. It finally came into view over the hills, so we pulled over on Highway 81 and I turned my car off, just barely south of where the updraft would pass. This storm had a very large inflow tail leading into the meso along the forward flank, which we took as a good sign. At this point, it became tornado-warned, and we began to see a bit of a wall cloud. Several times the rotation tightened up and a stubby funnel was present, but it never did more than that: 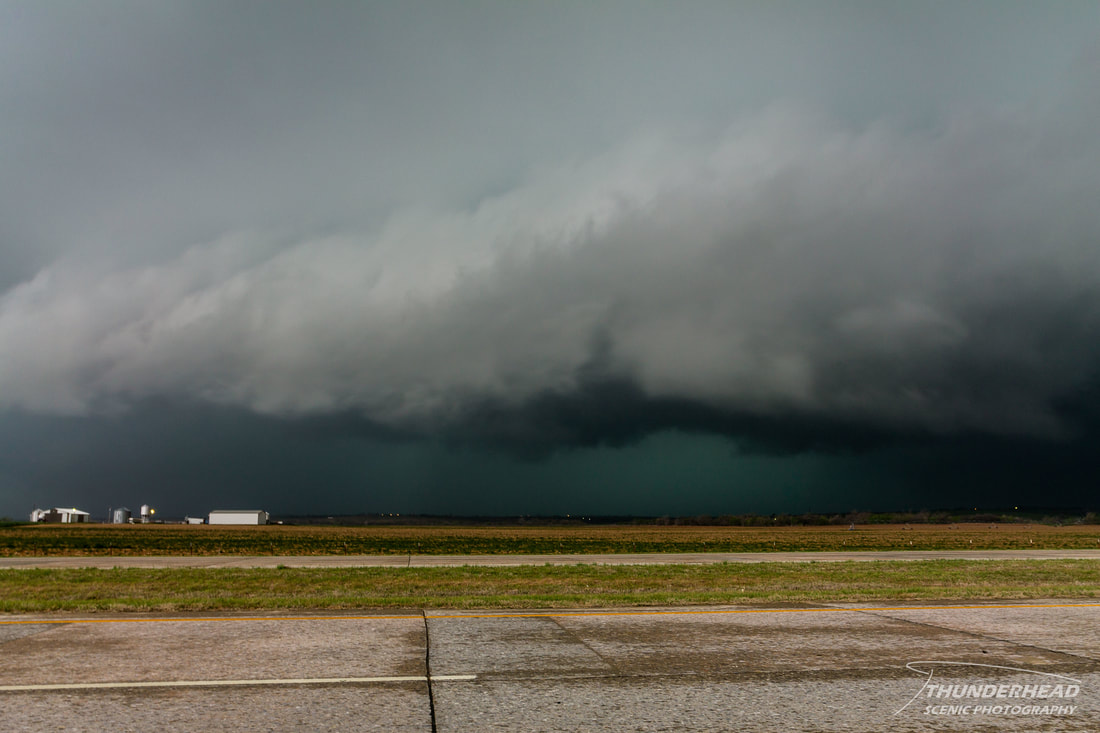 We decided we needed to move a little south to get out of the way. As my luck would have it, when I went to start my car, I got the heart-stopping sound of a car with a dead battery (which, if you think about it, really isn't much of a sound at all). This was very nerve-racking because this storm is trying to produce a tornado and we were about to get an unwanted front row seat. There had been a few chasers parked a couple hundred yards behind us, so I ran back there to get help. The first guy I came to was a resident from the area just watching the storm, but he wanted to drive off and get out of there. He and I went back and forth a bit as I tried to convince him to stay to help us. I thought I had finally convinced him to help, so I started running back to my car, only to turn around after a few strides to see the man had turned and drove off the other way (wow). Contestant #2 was two other chasers in a Prius. I asked if they could give me a jump, to which they said that you can't do that with a Prius (duh). Contestant #3 was a chaser who would help us out, even though I could tell he wasn’t wanting to. It took about 5 minutes (though it felt like HOURS in the moment) to get the battery charged. The storm had passed just to our north and was now displaying a well defined wall cloud to the northeast. I finally got my car to start, thanked the man for helping, and sped south to see if we could catch up to the storm. We were in the middle of a road hole that had no eastward options, except for one 10-15 miles both north or south of where we were. We chose to go south, but quickly realized we were getting way out of play for this storm, so we decided go after the storm further to the west. This supercell had very strong inflow, which you could see by the dust being kicked up into the updraft. It almost took on a mother ship appearance: 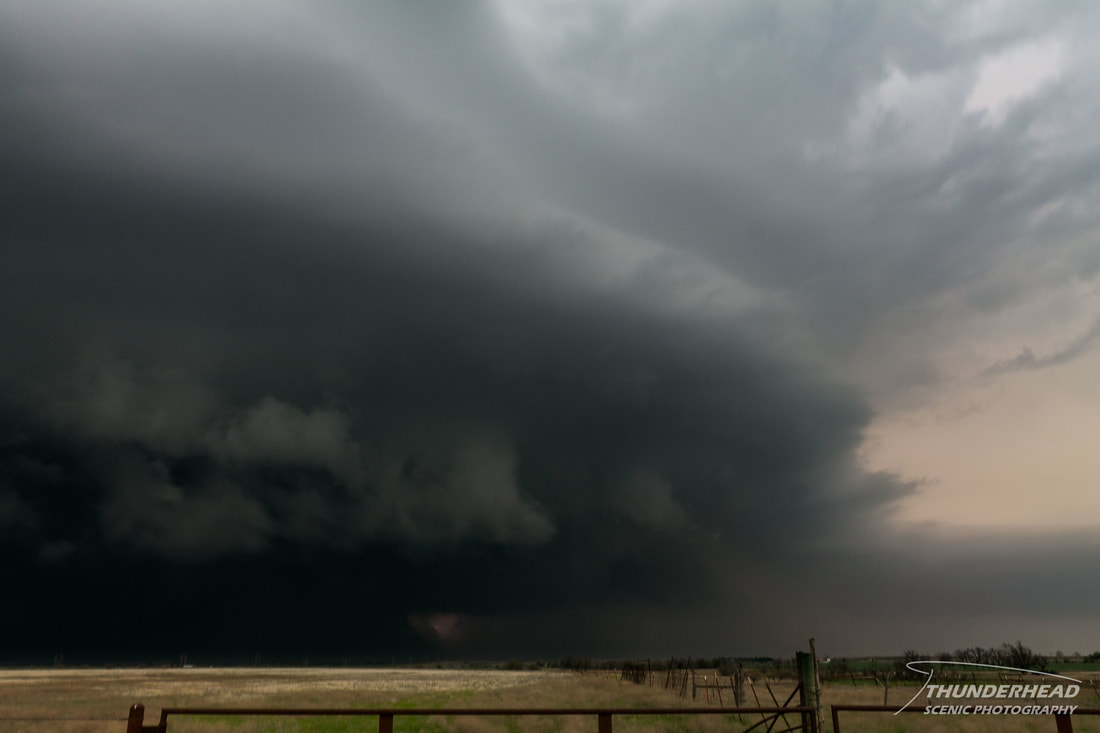 ​It was tornado-warned while we were on it, and we could see some very good rotation in it visually and on radar, but it failed to produce a tornado. We did see a power flash going off for about 30 seconds, which was probably caused by winds from the rear flank downdraft. We let it go by and had to move further south to get out of the way of third storm. A large rear flank downdraft gust front being back-lit by the setting sun made for some good pictures: 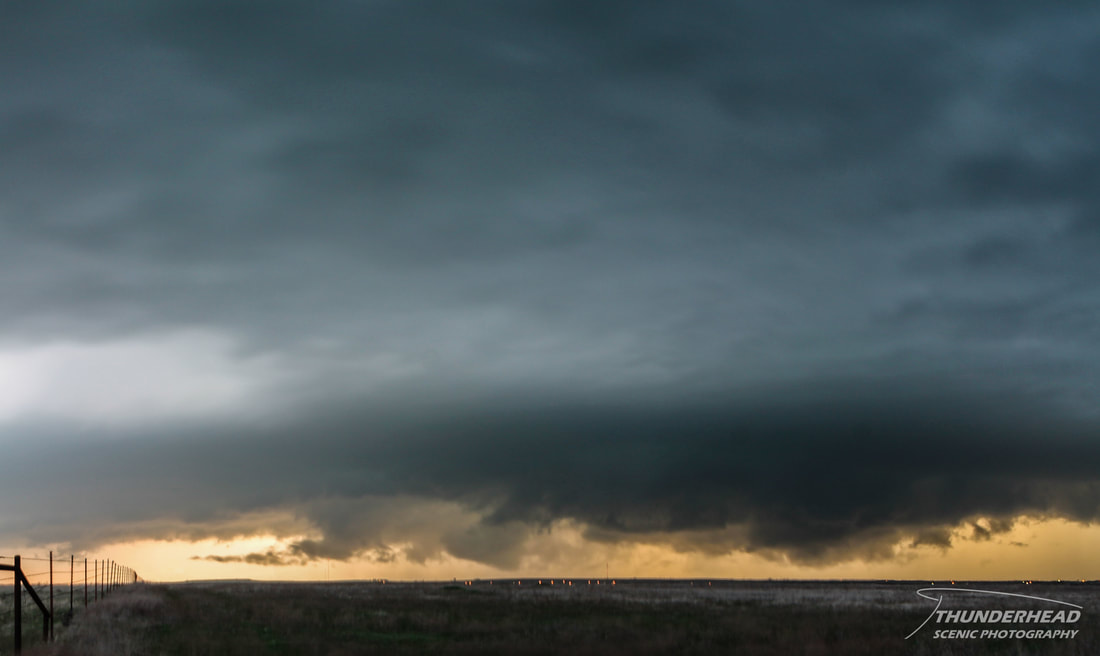 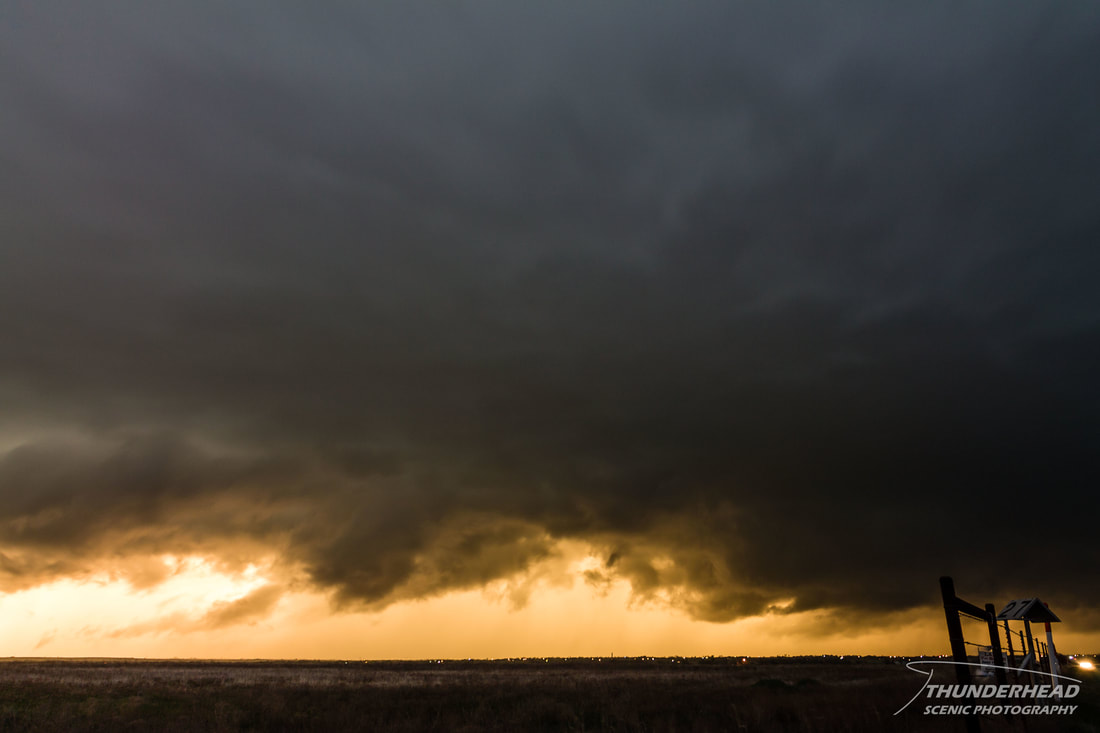 ​However, it looked like it was about to occlude due its strong outflow. We figured it would probably kill the storm by the time we got to it, so we called it a night and started to make the trek back home.